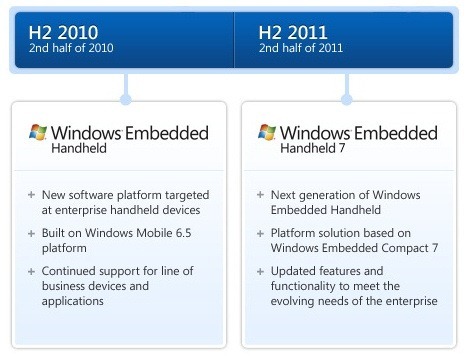 Just to recap, Microsoft already has Windows Mobile 6.5 on the market, Windows Phone 7 nearing launch, and Windows Embedded Compact 7 coming to tablets. Is there anything left in the mobile spectrum for Microsoft to sink their teeth into? Apparently, yes.

According to PCMag, Microsoft is set to launch, yet another mobile operating system by the name of Windows Embedded Handheld. What could this OS possibly be? Aren't there enough versions of mobile Windows in the pipes? According to Ballmer, this is what we can expect:

At Microsoft MIX, the Redmond based company made it very clear that Windows Phone 7 was an OS focused on both personal and enterprise use. With SharePoint integration and better Exchange support, it would seem that Microsoft was betting heavily on Windows Phone 7 in the corporate world. However, the news of another embedded OS comes as sort of a shock.

Announced alongside Motorola's ES400 device , Windows Embedded Handheld will be used on EDA (enterprise digital assistant) devices. EDAs are special phones that support line-of-business applications, push-to-scan capabilities, and other heavy enterprise-only features. It doesn't look like Microsoft is aiming for a brand new phone OS with Windows Embedded Handheld. This OS variation seems more like a business deal that will keep Microsoft strongly grounded in companies for years to come.