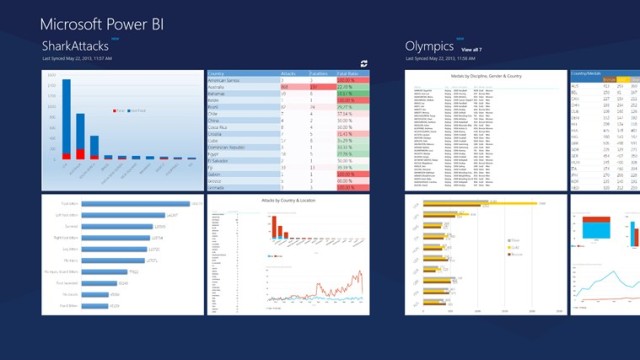 Business Intelligence is a growing trend in the IT industry, and Microsoft is trying to become a leader in this pioneering industry. In July, the company announced the launch of Power BI for Office 365 subscribers. The service was made to provide businesses with a cloud-based solution to view Office 365 reports, particularly from Excel documents, on the web and via mobile devices. This week, Microsoft quietly launched the Power BI app for Windows 8 and Windows RT as its latest in-house developed app for those operating systems.

The Windows Store page description for the app notes that it requires a paid Microsoft Power BI for Office 365 account in order to view any reports. Once that's done, the app displays multiple live reports on its home screen, as shown in the screenshot above, and new reports can also be added to the screen from other SharePoint locations from the app's browse screen.

The Power BI app also lets users share any reports that are displayed with others via email. Reports can be tagged as favorites for quicker viewing at a later date. The data can also be filtered and sorted in each report for a more customized view of the report's statistics.

Microsoft also has plans to release a Power BI app for owners of Apple's iPad but so far there's no word on when it might be released.