With almost all Windows Phones around the world now upgraded (or eligible for upgrade) to the latest version of the mobile OS, Windows Phone 7.5 or ‘Mango’, its next big update will be ‘Tango’, expected in the first half of next year. But that’s still many months away, and in the meantime, there are a few minor issues with the OS that need to be addressed.

Today, Microsoft has begun pushing out an update to fix a couple of these issues. 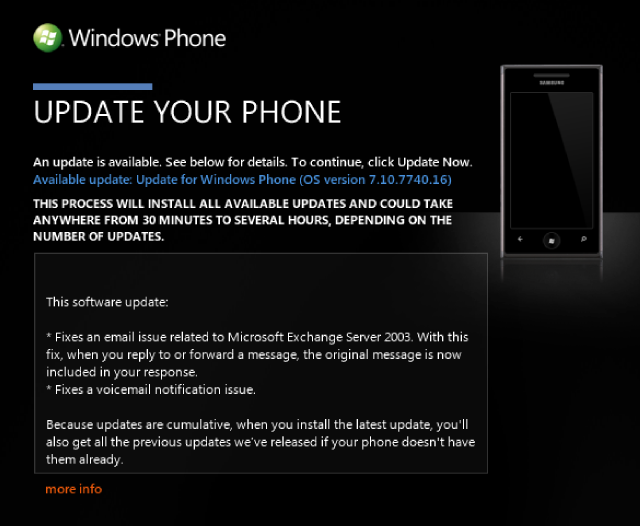 The update takes the OS version up to 7.10.7740 (up from 7720, the Mango OS version). To check the current OS version on your Windows Phone: from your Start Screen, swipe across to your Apps List, then go to Settings, and scroll down to About. Tap the ‘more information’ button, and you’ll see the OS version listed under ‘phone information’.

The update offers fixes for two issues: the first is a bug with Microsoft Exchange Server 2003 - the fix ensures that the original message is included when you reply to or forward an email. The second is an issue with the proper delivery of voicemail notifications, which is also now resolved. As with other Windows Phone updates, you'll need to connect the handset to a computer to download and install it. Despite the minor nature of the update, it's still treated as a full system update, including taking a complete back-up of the phone.

This isn’t the first time that Microsoft has issued an ‘extra’ update; it previously released update ‘7392’ shortly after the NoDo update (7390) was released, as a patch to address an issue with fake security certificates.

It’s disappointing that this update doesn’t appear to address the problem of the widely reported ‘disappearing keyboard’ in Mango, whereby for some users, the keyboard will simply vanish while in the middle of typing. Let’s hope a further update is released soon to sort out that irritating bug, and that Microsoft gets into the habit of releasing more frequent updates to its mobile OS - even if they just sort out minor issues rather than delivering exciting new features.