Microsoft has shown off a system dubbed "Mobile Surface" which links a mobile phone to a camera and projector. The system lets users interact with a projected screen by hand movements.

Todd Bishop at TechFlash, spotted the new device at Microsoft's annual employee only "TechFest" event. Named after its big brother, Microsoft Surface, the Mobile Surface allows users to interact with content without the requirement of physical touch. In the video below you can see a Microsoft worker demonstrate music volume control by moving their hands up and down over the table.

Mary Jo Foley (ZDnet) also spotted some additional information about the Mobile Surface over at Microsoft's Research site. The information has since been removed but according to a Google Cached version of the site, we can see that Microsoft believes the Mobile Surface is novel interaction system for mobile computing. "Our goal is to bring Microsoft Surface experience to mobile scenarios, and more importantly, to enable 3D interaction with mobile devices. We do research on how to transform any surface (e.g., a coffee table or a piece of paper) to Mobile Surface with a mobile device and a camera-projector system."

Microsoft is not stating if and when this type of system will be available. 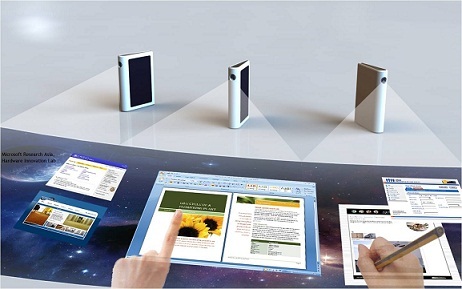