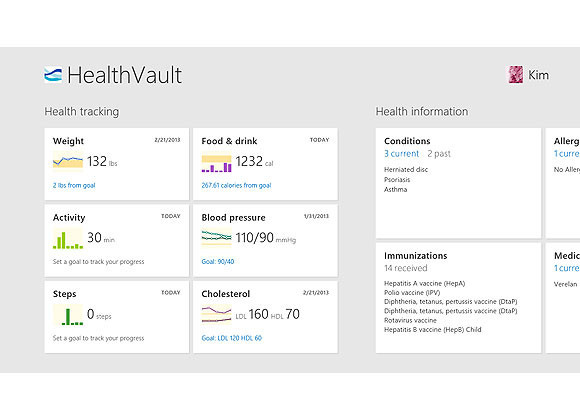 In March, Microsoft launched the first public version of its HealthVault app for Windows 8. The app was made to give ordinary people a way to collect, store and share their medical and fitness information so they can better monitor their health. Today, five months after it first launched, Microsoft issued the first major update to the HealthVault app with a number of new features.

The app's change notes shows that one of the new additions will allow users to pin its health and fitness tiles to the Windows 8 Start screen. That should allow for much faster access to information such as exercise stats and food monitoring. Yet another new feature lets users customize the app's home screen so they can see the tiles and information they want to see and do away with the tiles they have no interest in reading.

If you are a parent, the HealthVault app for Windows 8 now allows you to track and chart the height of your son or daughter, in case you don't want to do it the old fashioned way and track it via pencil marks on your kitchen wall. Finally, people who have diabetes can now use the app to track and chart their blood glucose measurements.