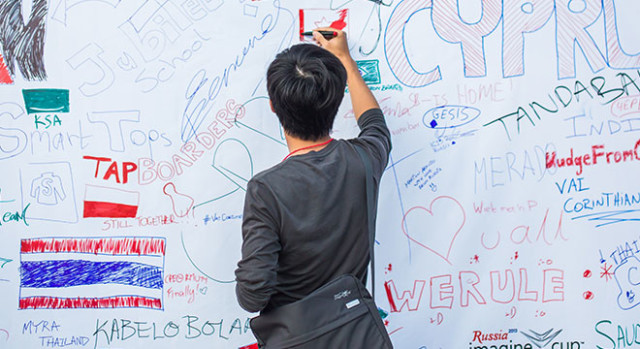 Imagine Cup might be one of the coolest things that Microsoft does on an annual basis. Here’s the short of it: take a team of students, give them a challenge, access to technology, toss in some cash and let their minds run free. And as the 2014 competition begins to near the finals that take place in July, Microsoft has announced the 35 teams who will be going to Seattle to compete for the top prize.

This year marks the 12th year of the competition and as we approach the finals, we will highlight a few of the teams who are taking these challenges to heart and creating innovative solutions that face the global community.

The teams who made it to previous finals really are some of the elite of the tech-youth. This year, there were over 150 teams from around the world competing, so to make it to the finals is truly a big deal for all involved.

For example, team Access Earth is creating a database of buildings' accessibility for those with mobility impairments. It’s a simple idea: catalog the mobility points and information of buildings, create an app that makes it easy to share this information and then voila, an app that serves the community with seriously helpful information. With their app, determining whether or not the building you are heading to is wheelchair accessible will only be a few taps away and if so, the app can help determine where the ramp is so there is no guess-work on the part of the user.

These are the types of ideas and products that come out of Imagine Cup and it’s one of the many reasons why we love the competition so much.

You can check out the teams at the source link below and while it's a bit late to join the 2014 competition, the 2015 challenges will likely be announced later this year. So, if you are bummed that you won’t win the $50k that Microsoft is offering up, you can start forming a team now and take a shot at success in 2015.