The team at Mionix did a great job with the packaging. Instead of a boring old box, they took a page from Apple's marketing department and made it about an experience. It's a little heavy handed, with the box sporting the phrase, "It's all about the craftsmanship," but it looks really nice. 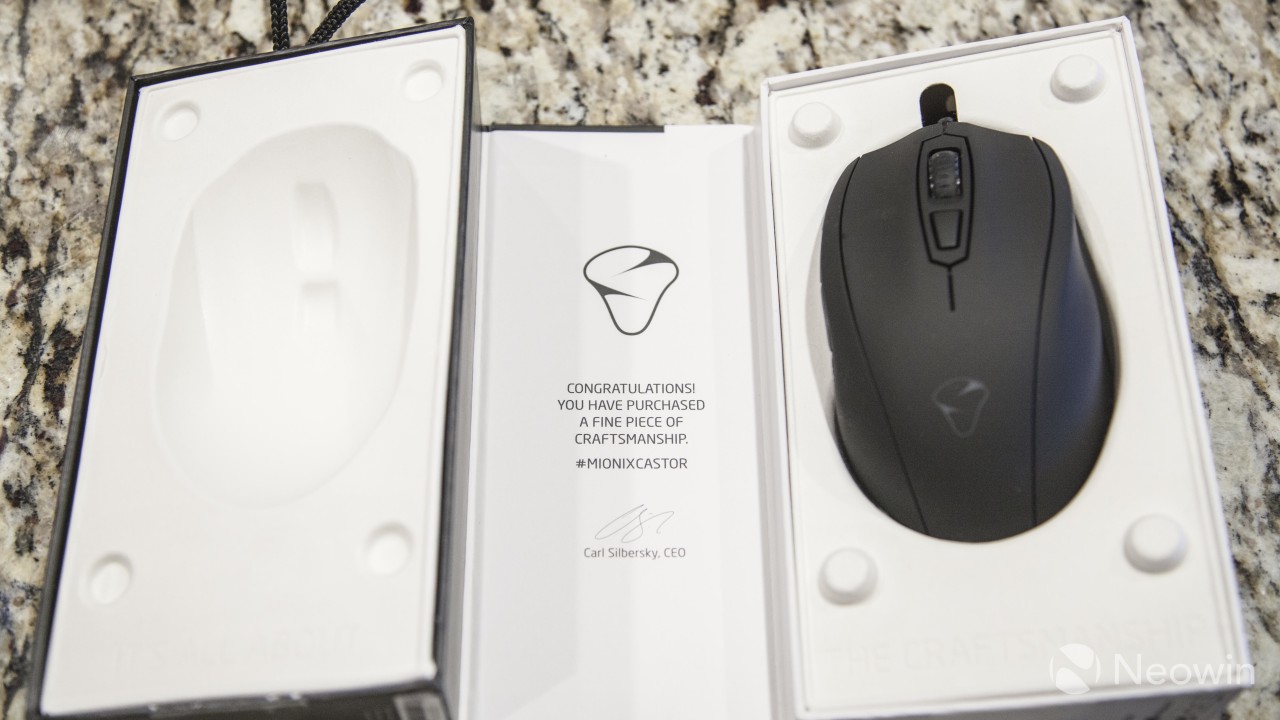 Opening the box continues the experience: The Castor itself sits into an insert on the right, while the spine of the box congratulates you for purchasing "a fine piece of craftsmanship," with the CEO's signature below the #MionixCastor hashtag. All of this is to convince the consumer that Mionix makes high quality products and that you should be proud to own it.

I'm not one for marketing fluff, so I rolled my eyes at most of this. That said, there is a segment of the population that puts a premium on packaging and presentation, and for that, Mionix delivers.

Aside from the mouse, there's a "quick start" guide in nine different languages, a sheet full of Mionix-related stickers, and nothing else.

The Castor is made of a combination of black plastic and rubber and actually looks nice and unobtrusive. The mouse itself is relatively small and has a high profile, striking a balance between players who prefer claw-grip devices and those who like the full palm grip. I fall into the latter group, but the Castor still felt natural in my hands while playing first person shooters for long stretches of time. 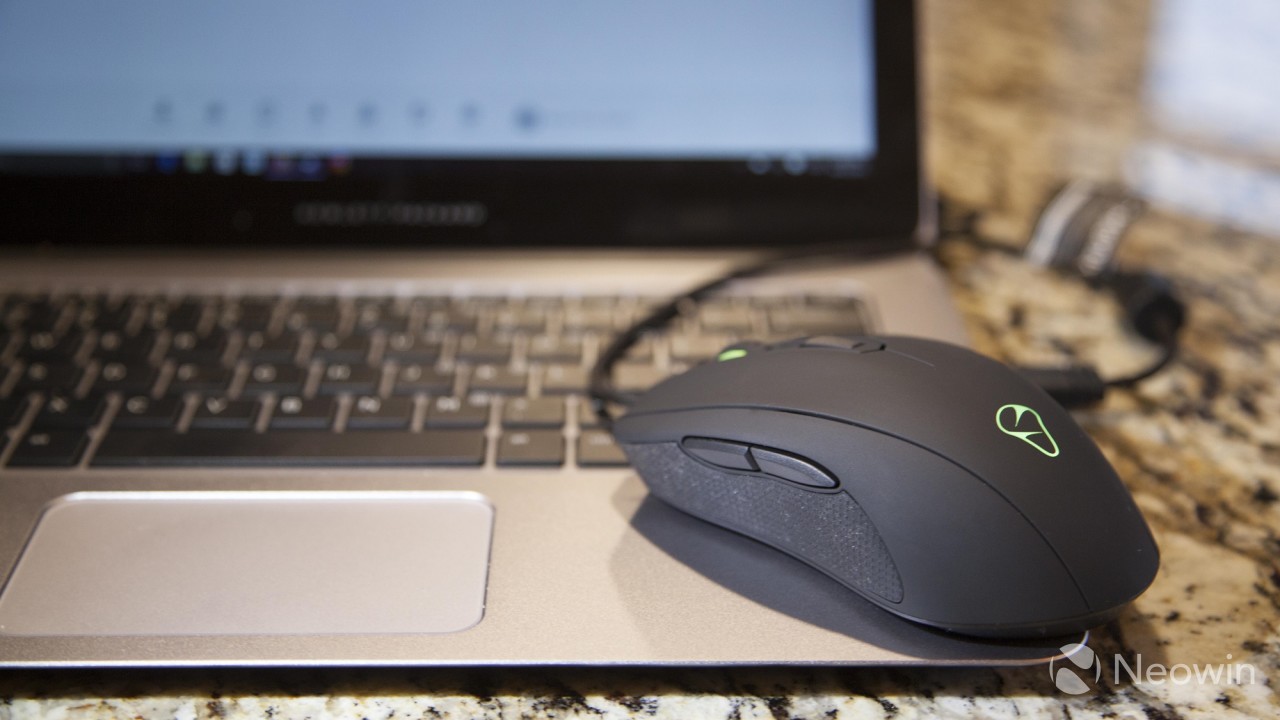 The mouse has six physical buttons: the normal left, right, and scroll-wheel buttons, two thumb buttons on the left side of the device, and a button below the scroll-wheel. By default, this button is used to control the DPI setting of the mouse, but all of the buttons are configurable through the software. It would've been nice to at least be able to tilt the scroll-wheel left and right to add a couple of more customizable configurations, but this base configuration works well enough.

There are two multi-color LEDs built into the device, one to highlight the Mionix logo, and the other to light up the scroll wheel. These colors are configurable through the driver software, and really do make the mouse look pretty cool, even if it offers little in the way of functionality.

The Castor is very light, coming in at a mere 93.8 grams (excluding the cable). By comparison, the Razer DeathAdder Chroma comes in at 105 grams, or 12% heavier, whereas the Zowie FK1 mouse we reviewed earlier came in at 90 grams. Some gamers prefer optional weights to make the mouse heavier, but the Castor does not support that feature. 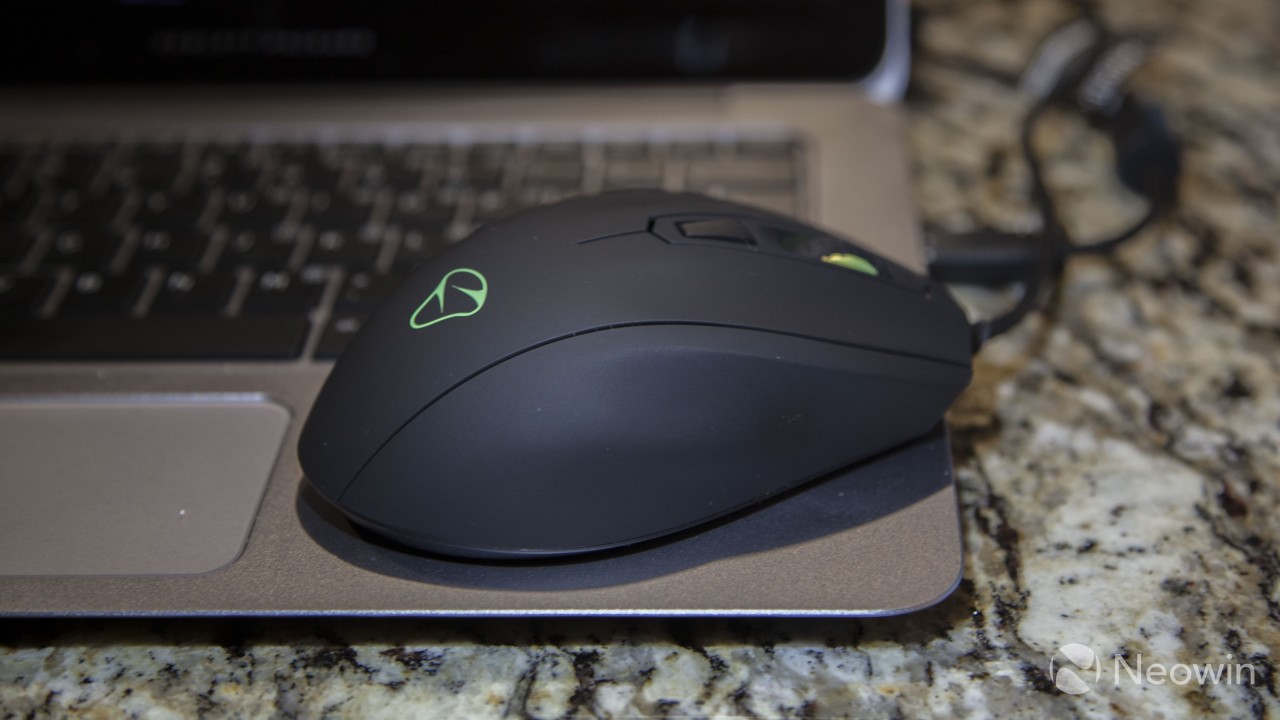 Mionix worked hard on the ergonomics of the Castor. The left side of the mouse is coated in textured rubber that naturally grips your thumb and prevents it from sliding around. The contour fit my thumb perfectly and was easy to use during gameplay. On the right side of the device, there's another minor ledge that separates your pinky from your ring finger and just feels natural to hold. Sorry to our lefty friends: The Castor is only available in a right-handed configuration. 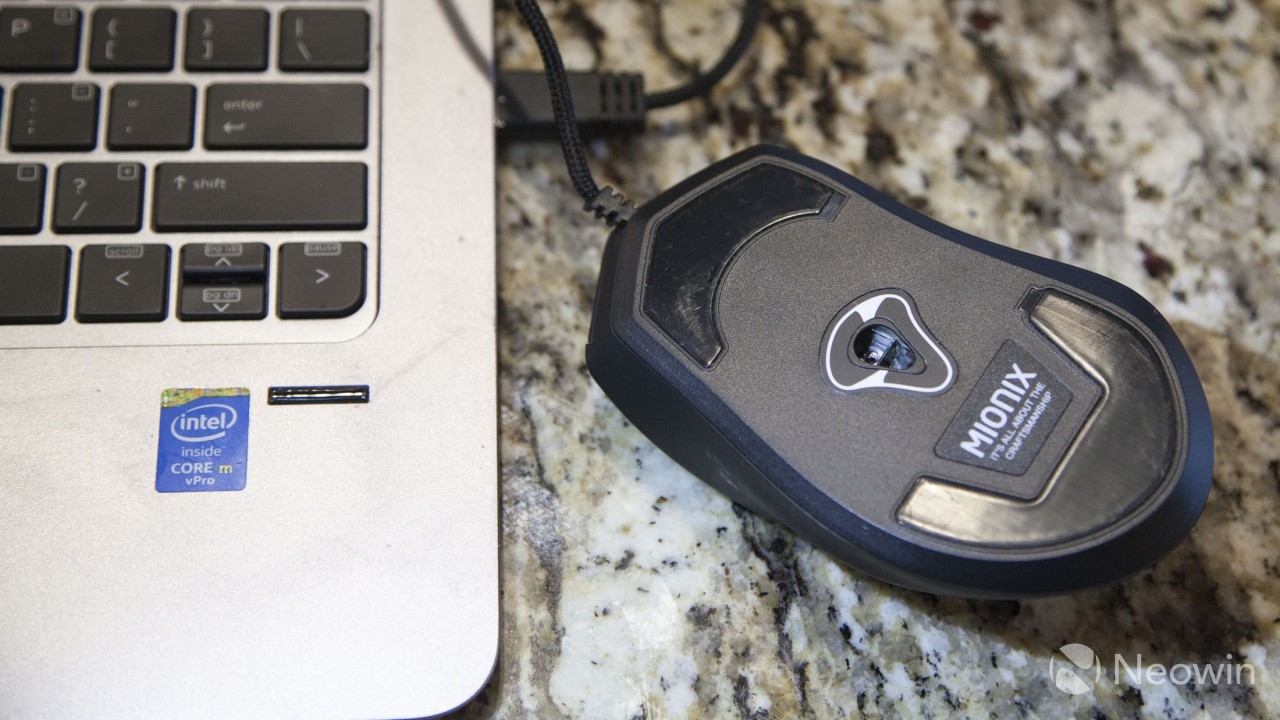 The bottom of the mouse is dominated by two large Teflon-like pads to aid the device in sliding across whatever surface you throw at it. The laser is in the middle of the mouse, surrounded by the Mionix logo, and below that is the company name, complete with the slogan, "It's all about the craftsmanship," selling you on the quality. 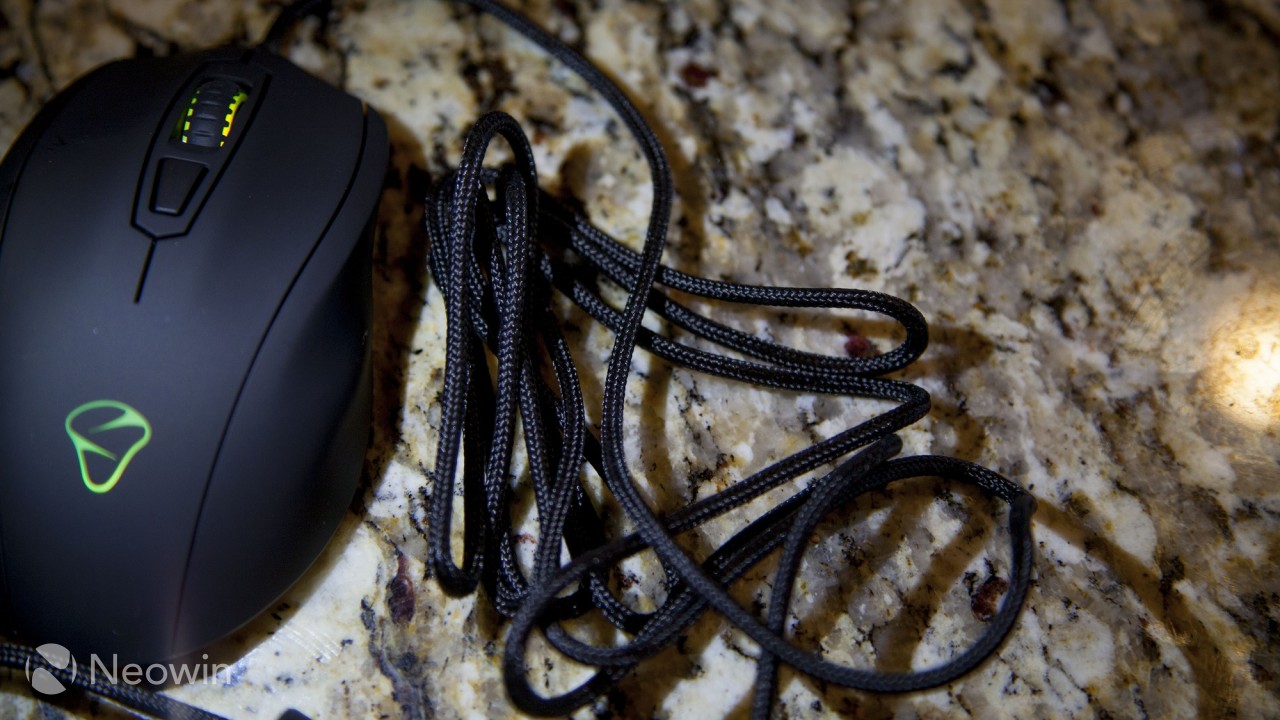 The Castor's USB cable is just over six feet long, and is nicely wrapped in a textured fabric to add to the high quality look and feel of the mouse.

I reviewed the Mionix Castor with software version 1.34, the latest available at the time of this article. Unlike the software used for the Tesoro Excalibur, the Mionix software is very simple and straight forward. The first thing that was interesting is the fact that you don't have to actually install anything. Since the configuration is stored in the mouse itself, the software is only used to reprogram the device. Unfortunately (and not surprisingly), the software requires administrator access so you won't be able ot treat it as like a portable tool. 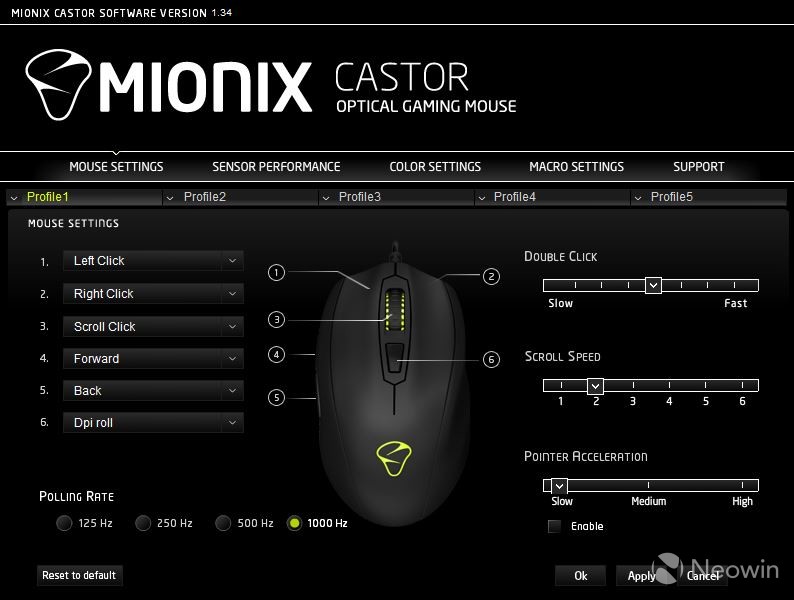 When loading the tool for the first time, you're greeted with a black screen that has a picture of the Castor in the center with arrows highlighting all of the buttons. This is the Mouse Settings page, and has all of the basic configuration options you'd expect for any mouse on the market. The left-hand side of the display tells you what each button does and allows you to change the function. On the right hand side is where you setup basic settings such as the scroll and click speed as well as pointer acceleration. On the bottom, you define the polling rate, from between 125Hz and 1000Hz. The interface is clean and intuitive. 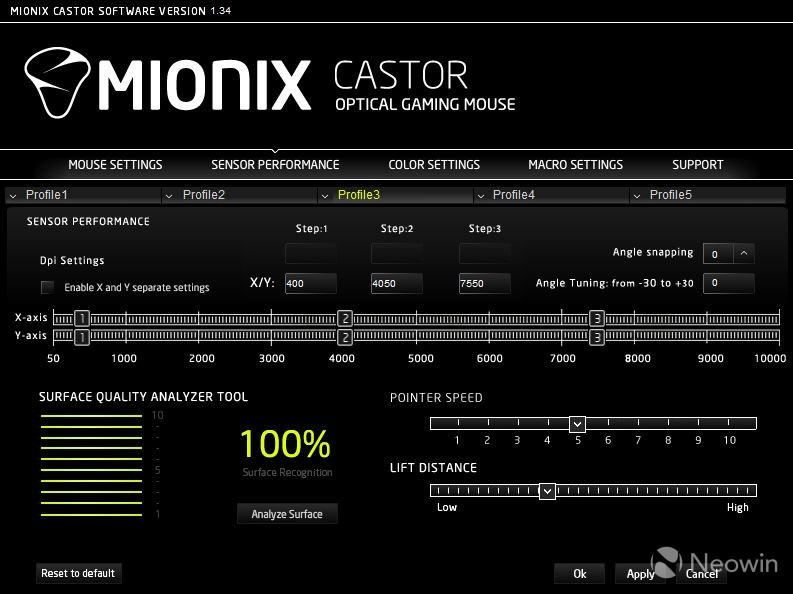 Moving along the tabs, we're next greeted with Sensor Performance. This is where you set three different DPI values that you can (by default) cycle through with the DPI button below the scroll-wheel. The settings allow you to go from 50 DPI all the way up to a value of 10,000 which is so twitchy as to be unusable by me. This allows a gamer to set the DPI really high by default but to easily switch to a low DPI when fine-grained control is needed, such as when using a sniper rifle. An advanced feature even lets you set the X/Y coordinates separately, allowing a high horizontal DPI with a low vertical DPI if needed.

Another nice feature of the software is the "Lift Distance." This setting defines how high off the surface the mouse can be and still register movement. While moving the slider all the way to the right won't let you wave the mouse in the air and control the action on the screen, it does still register when you're several millimeters from the surface. It's a nice fine-tuned configuration option if nothing else.

There's also a "Surface Quality Analyzer Tool" that I question the usefulness of. In theory, the tool tells you how well the mouse can track on the surface. Since I rarely received a score less than 100% on my particle board desk, I'm not sure the benefit. 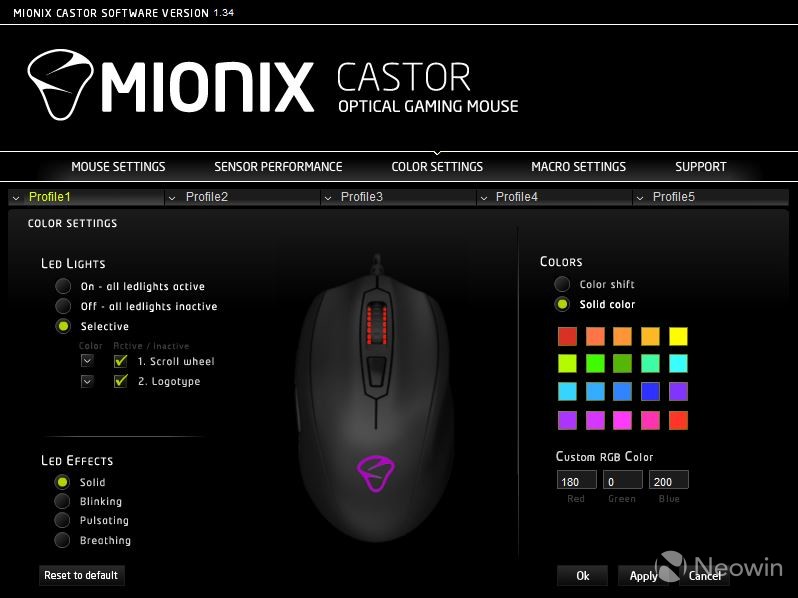 Next on the list is the Color Settings tab. Configuring the color of the scroll-wheel and Mionix logo is simple and if you don't want to choose a color from one of the squares, you can enter your own RGB value to get practically any color you want. The Castor can also be configured to make the lights blink, pulsate, or breath, but I didn't find this feature all that interesting.

The last configuration tab gives you the ability to set macros. With only six physical buttons, the number of macros available to the mouse is a little limited and configuring them is a little confusing.

The software gives you the ability to program five different profiles so you can easily configure the Castor based on what game you're going to play. I wasn't able to find a way to link a specific profile to a specific game though, so changing the profile became a manual process of loading the software, applying the profile, then launching the game.

All of the pretty hardware and feature-rich software is great, but is meaningless if the device itself doesn't work as well as it should. Fortunately, the Castor delivers.

I used the Mionix Castor in a number of games, including Far Cry 3: Blood Dragon, Tomb Raider, and FTL. While I preferred my standard desktop mouse (the long-in-the-tooth MX1000) to play FTL, the Castor delivered in the other games. This isn't unexpected, based on the fact that I didn't enjoy the Castor for normal desktop work, but I'll get to that in a bit.

While playing Blood Dragon, moving around was quick and effortless. I was able to sneak up to the Omega forces, lower the DPI, snipe the enemy, then switch back to a higher DPI to run away. Being able to easily adjust the DPI is also a good way of using the Castor as a regular desktop mouse as well.

Playing Tomb Raider reminded me that I preferred the game with the Xbox One controller, but using the Castor was better than using my regular desktop mouse.

I ran the mouse across a number of surfaces: The aforementioned particle board desk, the screen of my Galaxy Note 4, pieces of paper, and a college textbook. The mouse had no problem on normal hard surfaces, but it's clear that it doesn't work very well on reflective surfaces. When using it on the glass of my Galaxy Note 4, the mouse was completely unresponsive. When sliding it along the glossy white cover of a textbook, the cursor jerked around the screen unpredictably. The Surface Quality Analyzer Tool confirmed this, providing a surface recognition score of only 20%. Still, on a normal surface such as the desk or random pieces of paper, the Castor responded perfectly and provided clean, smooth movements and the Surface Analyzer always gave a perfect score.

It's important to note that while you can use the Castor as your daily driver, it's probably not the best tool for the job. Due to the light weight design, I found it a poor choice for normal web browsing or Microsoft Office work. This may simply be because it's what I'm used to, but if you're moving from a large mouse down to this gaming mouse, you will probably experience the same issues on the desktop.

Mionix has put together a solid product in the Castor. While I feel that their constant mentioning of quality craftsmanship is a little over the top, it's clear that it's more than just a marketing slogan. The Castor feels like a premium input device. 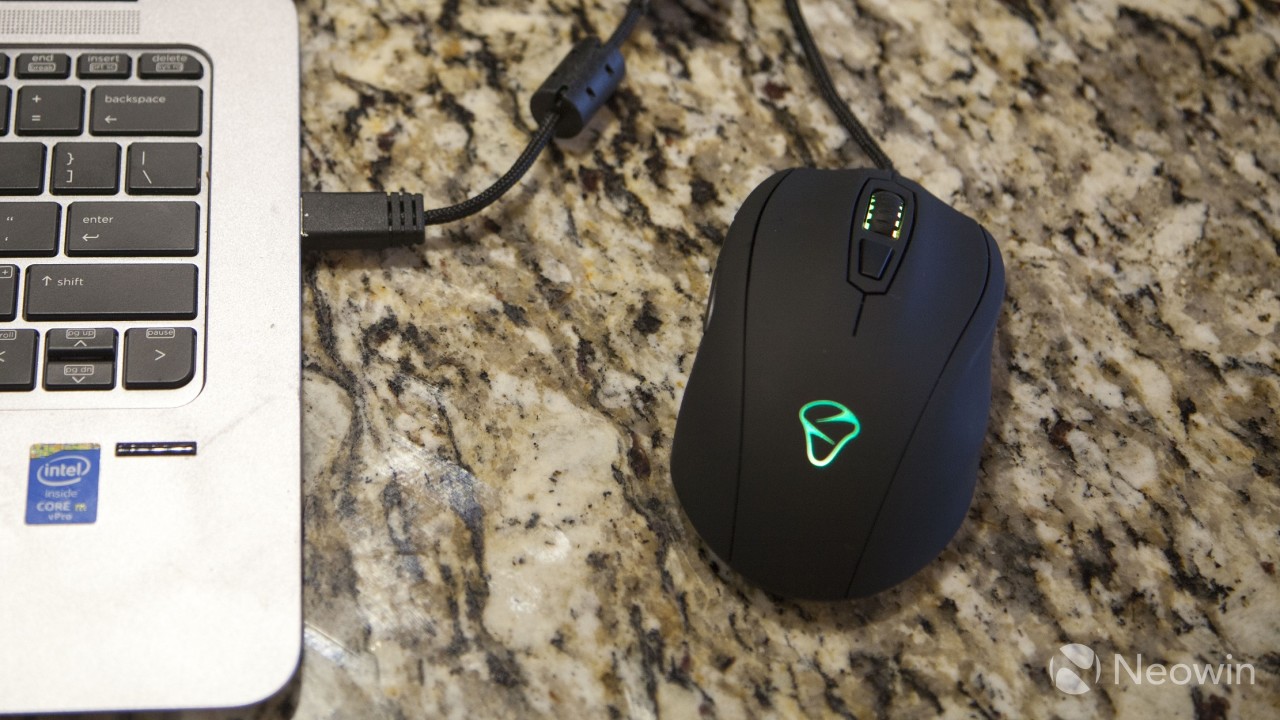 You can definitely use the Castor as your normal daily device if needed, but I still prefer a traditional desktop mouse. While both work, the extra heft of the Logitech MX1000 just felt more natural to use for normal day-to-day browsing, Excel spreadsheets, and Photoshop. This is clearly a personal preference, and if I used the mouse on the desktop for more than a few weeks, I might start to change my mind.

From a gaming perspective, the Castor delivered. I'm far from a professional gamer, and I won't claim that this mouse has given me the ability to compete with the pros, but I can say that the Castor is the best of a limited number of gaming devices I've used over the years. Some gamers will definitely wish there were more buttons on the mouse, and I suspect most MMO players won't even put this device on their short list because of that limitation, but for everyone else, the Castor is a worthy product to frag with the best of them.