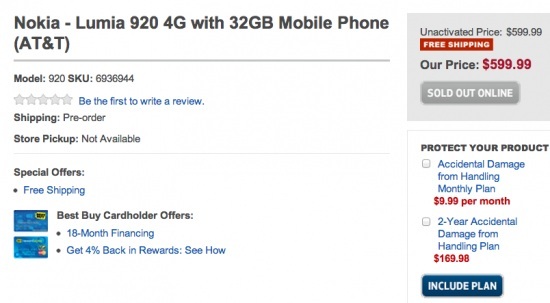 Other Windows Phone 8 handsets, including the HTC Windows Phone 8X, are still available for pre-order, so it’s looking more likely that the Nokia is proving to be as popular as the launch hype suggested. All five colours have gone too, all listed as “SOLD OUT ONLINE”.

Rumours are circulating that Best Buy only had 200 handsets which, if true is a stupidly low number to stock, even for the Windows Phone and Nokia brands. But in turning the frown upside down, listing the handsets as sold out is a good move, as it shows that the device is - on the face of it at, least - overwhelmingly popular, no matter how many of them were available for pre-order.