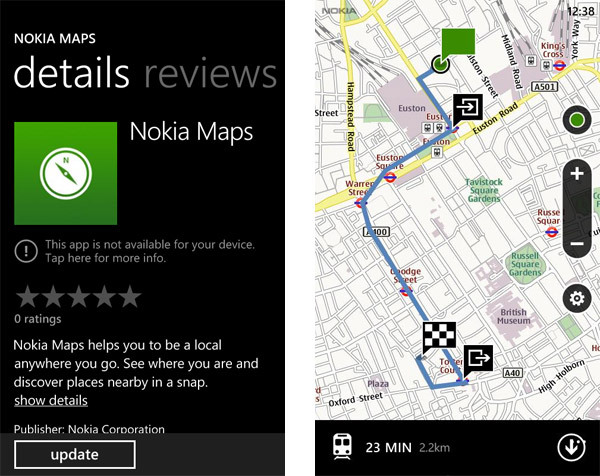 Nokia continues to show that it is getting serious about its efforts to release some unique features and apps for its upcoming Windows Phone 7-based devices. The web site Istartedsomthing.com reports that a Nokia Maps app placeholder listing, with screenshots, has been discovered. The app will likely be released as one of a number of exclusive programs for Nokia's smartphones based on Microsoft's mobile operating system.

The screenshots of the Nokia Maps app show everything that you might expect if you have used similar smartphone mapping applications. The maps have options for traveling via public transport, cars or by walking to your planned destination. There's support for reviews of locations like restaurants on the maps along with user-submitted pictures. All in all, the Nokia Maps application, at first glance, seems to be a fairly solid way for using your smartphone to get to wherever you might want to travel.

There's no indication in the screenshots that the Nokia Maps app supports any kind of voice-controlled navigation. Earlier this week, a leaked marketing slide for Nokia's Windows Phone 7-based smartphones indicated some kind of voice-based navigation feature would be a part of Nokia's devices, along with 3D maps.

Meanwhile, there's been a boatload of news surrounding Nokia's plans for WP7-based phones over the past few days, including some leaked hardware info about three possible models, and rumors that Nokia is offering to pay app developers in advance to make software for its Windows Phone 7 devices. Again we should learn a lot more later this month when Nokia holds its Nokia World developers conference in London.