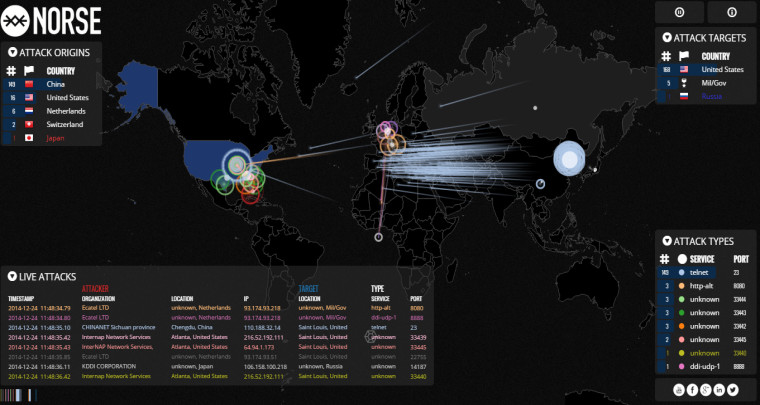 Not many of us are aware that the internet we use every day is a stage for a "digital cold war". As we reach new heights in what the internet can do to help innovation, access to information and services, business exposure, and so on, we also have to deal with digital attacks that attempt to steal data and render services unavailable. Threat of exposing sensitive information usually follows.

Norse, a company that specializes in preventing or stopping these attacks from doing any damage, now provides a fascinating map that shows the "digital cold war" in real-time. Some may see a resemblance with a map from the Wargames movie.

It shows some pretty intense attacks against US, China, and European countries, but there are very few attacks against Canada for some reason. They track "the top three to five million worst IPs on the internet", processing "over 150 terabytes of data everyday". While you may expect attacks from and against North Korea, you won't see many of those, since their largest exit point is shown by a dot in north eastern China.

Speaking of North Korea, the company doesn't know for sure who was behind the Sony attack, and their SVP, Kurt Stammberger, says there is a lack of evidence to support the US government's conclusion on the origins of the attack. In the middle of this confrontation, North Korea experienced an internet outage for a few hours. Meanwhile, Sony is considering releasing "The Interview" for free on its own streaming service, and in theaters starting December 25th.