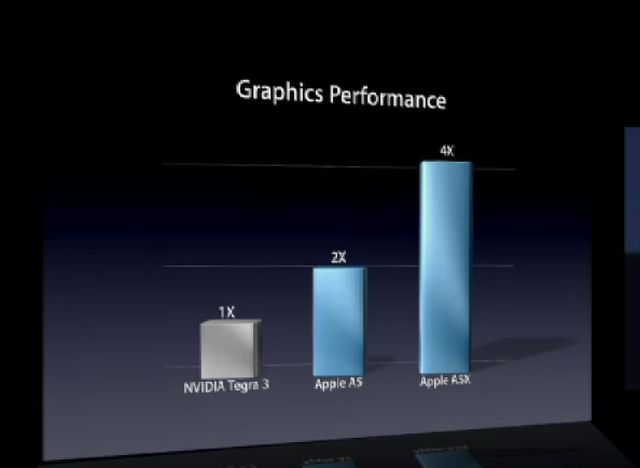 Today during Apple's press event where it revealed "the new iPad", the company showed off a graph where it claimed the graphics performance of the A5 processor "used in the iPad 2 and iPhone 4" was twice that of NVIDIA's recently launched Tegra 3 processor. Furthermore, Apple claims that the new iPad's A5X processor has four times the performance of the Tegra 3.

Those statements are pretty bold and NVIDIA apparently wants Apple to back up those claims. ZDNet.com reports that an NVIDIA spokesperson said:

We don’t have the benchmark information. We have to understand what the application was that was used. Was it one or a variety of applications? What drivers were used? There are so many issues to get into with benchmark.

It's doubtful that Apple will ever reveal how it tested the graphical performance of the new iPad against an Tegra 3 device. However, NVIDIA says it was "certainly flattering" to be mentioned during today's press event. NVIDIA plans to purchase the new iPad like everyone else on March 16 to see if Apple's claims are true. Our question: If it does turn out that Apple's graphic processor claims are accurate, will NVIDIA also admit to defeat?