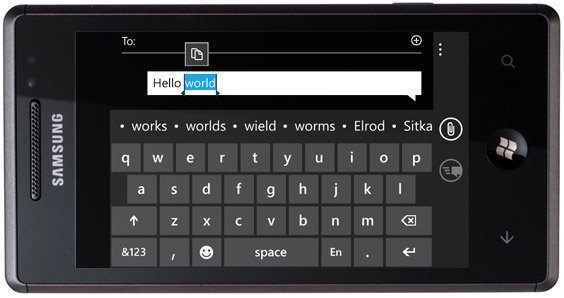 Windows Phone 7 owners who just can't wait until early March to get their dose of copy and paste may have a second option, with some OEM service centres reportedly flashing phones with a ROM containing the new functionality.

Microsoft enthusiast Long Zheng spotted a post over at the xda-developers forums in which a Samsung Omnia 7 user describes his surprise at sending his phone off for a warranty repair and having it come back with a new feature added.

Curiously, that build string doesn't line up with one provided by fellow Microsoft enthusiast Rafael Rivera on February 5. According to a tweet by Mr Rivera, the final ''NoDo'' update, which will bring copy and paste to WP7, will be build 7.0.7389. As Mr Long points out, that would put the build lonely2k5 received somewhere between the ''original'' build that has shipped since the launch of Windows Phone, and the NoDo build. According to Neowin sources, NoDo could be released March 8.

Mr Long also points out that given the widely-publicised issues following the recent ''mini-update'' to the Windows Phone platform, it may be wise to hold off having your phone updated to this interim build.

Last week, Neowin also reported that a NoDo build of the Windows Phone OS had been spotted on new WP7 devices shipping in India.