In February, a few lucky Windows 8 owners were able to download Bejewled Live, a version of PopCap's classic puzzle game, from the Windows Store. Unfortunately, the game was inadvertently published with a PopCap spokesperson saying that the final release was "still a ways away." The game was quickly removed from the store after just a few hours. 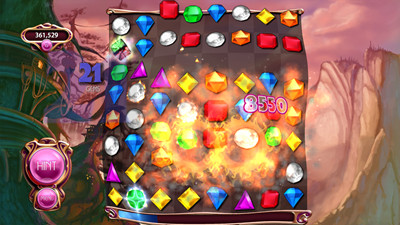 Now Microsoft has announced that the final, and official, version of Bejeweled Live made for Windows 8 is finally coming soon, and may be released later this weekend. In a post on the Windows Experience blog, Microsoft state that the Windows 8 version will cost $4.99 and will have three game modes; the classic mode, the Diamond Mine and Butterflies. It added:

Bejeweled LIVE takes special advantage of Windows 8 features such as showing your game status updates on the Start screen with the Bejeweled LIVE live tile, play Bejeweled in Snap mode and check out your friends’ scores on Xbox LIVE. Earn flashy Bejeweled badges and Xbox achievements to prove your multifaceted skills!

The blog also listed a number of other games that are coming for Windows 8 users this weekend, including Microsoft's own Shuffle Party that lets users play various shuffleboard games with their own Xbox Live Avatar.

In the future, Microsoft plans to add even more Windows 8 games to its lineup, including Temple Run Brave, The Harvest, Ty the Tasmanian Tiger and Doritos Crash Course Go!