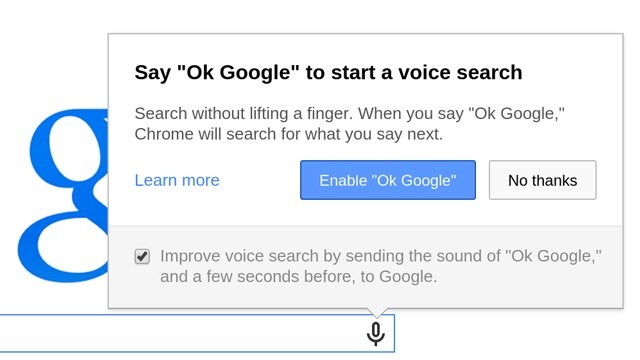 The 'OK Google' voice command search feature is no longer available after this week's release of Chrome 46 on Windows, Mac and Linux. Since May last year, users had been able to say the magic 'OK Google' command at Google.com or in a new tab to start a voice search. But now Google appears to have decided too few users were using the feature to warrant keeping it in the browser.

However 'OK Google' isn't completely disappearing from Chrome, it will remain active for Chromebooks and mobile versions. Furthermore, Windows, Mac, and Linux Chrome users can still use their microphones for voice searches by clicking on the mic icon in a new tab or at Google.com.

Google's move to drop voice activated search is in contrast with Microsoft's recent additions to Cortana. The intelligent search assistant is continually becoming more capable with integration with Netflix and LinkedIn on Windows 10, and soon on Xbox One.