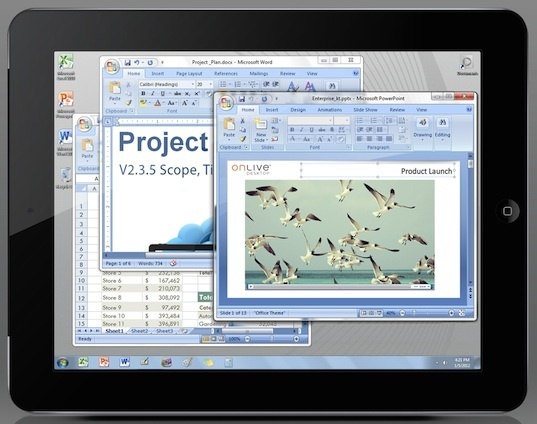 OnLive has concentrated on streaming PC games to PCs, Macs and more recently iOS and Android devices. Now the company has announced at CES 2012 its first non-gaming application, OnLive Desktop. As VentureBeat reports, the app will be released first for Apple's iPad on Thursday that will allow users to get free streaming access to Microsoft's latest versions of its Microsoft Word, Excel and PowerPoint applications of Windows Office.

These applications wil be run on OnLive's remote cloud servers, and users will be able to store 2 GB of data for free. The touch screen for the iPad can be used to access the Microsoft Office apps. The service will later launch for the iPhone, Android, the PC and Mac and other platforms. Users can access OnLive Desktop via WiFi and 4G wireless networks but 3G networks aren't supported.

Later OnLive plans to launch OnLive Desktop Pro, which will give users 50 GB of cloud storage, full web browsing acceleration at speed of up to 10 gigabits a second and more for $9.99 a month. OnLive will also allow people to install their own apps on OnLive's servers but with the Pro service but there's no word on how exactly that will work. OnLive will also launch yet another version, OnLive Enterprise, for large businesses.