Valve's Steam service continues to add new members to its ranks, proving once again that PC gaming is not even close to being dead. Valve recently announced it had signed up over 65 million Steam accounts, and its annual holiday sale has seen its concurrent user numbers reach a new record of over 7.6 million, thanks in part to a Christmas Day giveaway of Left 4 Dead 2. 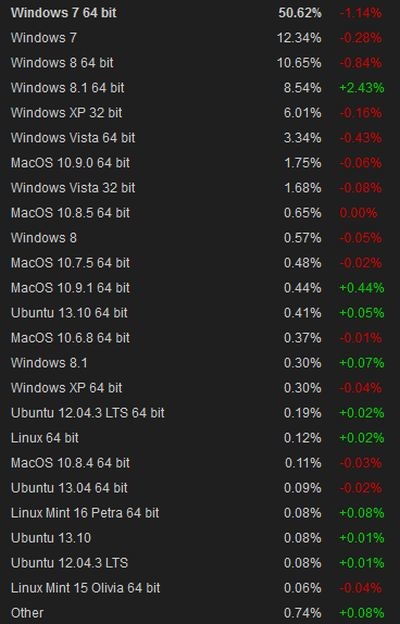 Specifically, the survey shows that Windows 8 is installed on 11.22 percent of PCs that connect to Steam, while Windows 8.1 was found on 8.84 percent of those computers (both numbers combine the 32-bit and 64-bit SKUs). The updated stats mean that just over one in five PCs that sign up to use Steam do so with Windows 8 or 8.1.

Windows 7 claims the top spot as the most used OS on Steam. In December, its share of users was 62.96 percent, compared to 64.38 percent in November.