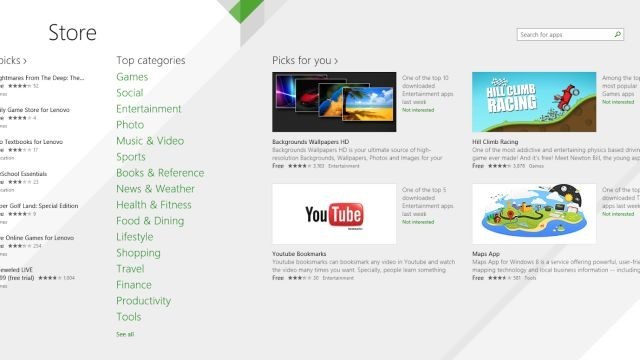 On December 27, 2012, Neowin reported that there were over 35,000 Windows apps available for download worldwide in the Windows Store. Today, just over a year later, that number has increased to about four times that amount, according to data from Metro Scanner.

The site, which allows users to see what's in the store, shows that as of today, there are a total of 142,451 apps available for download. Of that number, 108,739 apps can be accessed by U.S. users; Microsoft officially announced that the Windows Store had reached the 100,000 app milestone in July.

While there is still a ton of apps published in the store every day that are blatant copies of other popular applications, Windows has seen the Modern app family increase with a number of major releases in the past 365 days. That includes the official Windows 8.1 Facebook app, along with Foursqure, Flipboard, Twitter and more. Yet there are still plenty of gaps in the Modern app library, most notably from YouTube , although Google apparently gave the OK to build the app for the Xbox One, which uses the Windows 8 kernel.

Microsoft has recently been offering some limited data on Windows Store statistics. It claimed that the Store had 1.7 million daily app downloads in October, with a total of over 51 million apps downloaded for that month. In November, the company said the store had 1.3 million app downloads for paid games and over 16 million free game downloads, but declined to give overall app statistics.