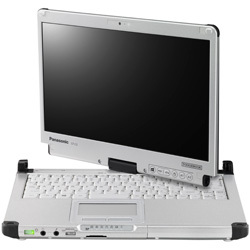 Panasonic's Toughbook lineup of notebooks is well known among businesses who want a laptop that can travel well and take a lot of abuse. This week, the company joined the Windows 8 bandwagon with their Toughbook C2, which has Windows 8 installed along with a five point touch screen.

The press release said that the 12.5 inch screen can be rotated and flipped back, turning the notebook into a really big tablet device. It also has an Intel Core i5 processor inside, running at 2.8 GHz, and a battery that lasts about 11 hours. It can be extended to 15 hours with the optional longer life battery.

The notebook will be released in December by Panasonic, and users still have the option to have Windows 7 installed if they are not ready for Windows 8. The price? It's a tad expensive at $2,949 but the Toughbook C2 is made more for businesses than consumers.