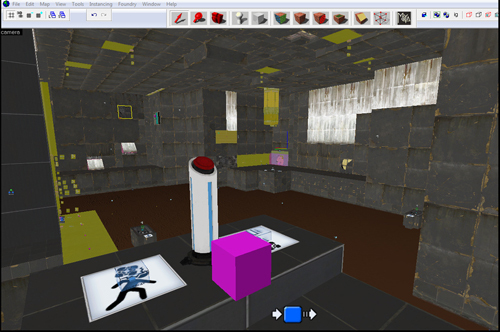 If you have been playing Portal 2 and have been itching to see if you can make levels as fun and as challenging as Valve's team members, now is your chance. Valve has announced that the first beta versions of the mod tools for the recently released puzzle shooter sequel are now available to download via Steam. If you own the game you can download the mod tools under the Tools section of the Steam client.

The tools include an updated version of Hammer, the map editing tools that's been the basis for all of Valve's games going back to the original Half-Life in 1998. You will also get an updated version of the Faceposer software that helps with creating facial animations and skeletal animations for character models. You also get some example maps to help you get started to make your own as well as updated tools for command-line compiling. All of the tools will allow people to make their own Portal 2 single and co-op maps along with new sounds, character models, skins and more. Naturally the mod tools will only work for the PC version of the game.

Portal 2 has been out for a few weeks now for the PC, Mac, Xbox 360 and PS3 platforms. You can check out what Neowin.net thought of the game in our in-house review. The game was released a couple of days before the Playstation Network shut down so many, if not most, PS3 owners haven't had the chance to play the co-op portion of the game. Valve has already announced plans to release a free DLC pack this summer with new levels, a challenge mode and more.