This is a spoiler-free review of Psychonauts 2

Psychonauts 2 is the long-awaited sequel to Psychonauts, a game that originally released in 2005, and is since regarded as a cult classic due to its wacky characters and mind-bending gameplay. Luckily, Psychonauts 2 is a third-person action platformer along the lines of the original, but picks up after the events of the virtual reality-only Psychonauts in the Rhombus of Ruin. Once again, you step into the shoes of Razputin Aquato — now a Psychonaut intern — and embark on a new adventure to uncover the identity of the mastermind behind a kidnapping. Unfortunately for Raz, the mystery deepens from there and leads to even more chaotic missions.

Psychonauts 2 allows you to explore the minds of a series of characters as they battle various forms of mental illnesses. The title depicts addiction, anxiety, post-traumatic stress disorder, and other conditions in a comical manner but, in my opinion, maintains a healing-focused tone that isn't disrespectful to those who live with them. As someone who copes with anxiety on a daily basis, I didn't feel like the game was making light of a serious issue. With that said, it's important to keep this in mind before you pick up Psychonauts 2.

You don't have to play the original Psychonauts — or Psychonauts in the Rhombus of Ruin — to figure out what's going on in Psychonauts 2. Luckily, the title provides a lengthy exposition that goes over the events of the first game and the virtual-reality experience. Over the course of the first mission, you'll quickly gain access to various abilities, learn about collectibles, gain combat moves, and catch up on the plot. Psychonauts 2 can drag a little during this time, but it was beneficial to someone like me who hasn't played Psychonauts since college.

As expected, gameplay revolves around running, jumping, melee combat, and using various powers like pyrokinesis and telekinesis to solve puzzles. You even gain the ability to slow down time down the line! Along the way, you meet a variety of quirky characters that tell you more about the story and give you tasks to complete. Without giving too much away, the story is entertaining, but may seem a little convoluted because a lot has happened in Psychonauts and Psychonauts in the Rhombus of Ruin.

I enjoyed the plot because it all comes together at the end, but the game could’ve been elevated through clearer storytelling. However, in Psychonauts tradition, the title is mind-bending to say the least, because that’s the realm we’re in given the franchise. 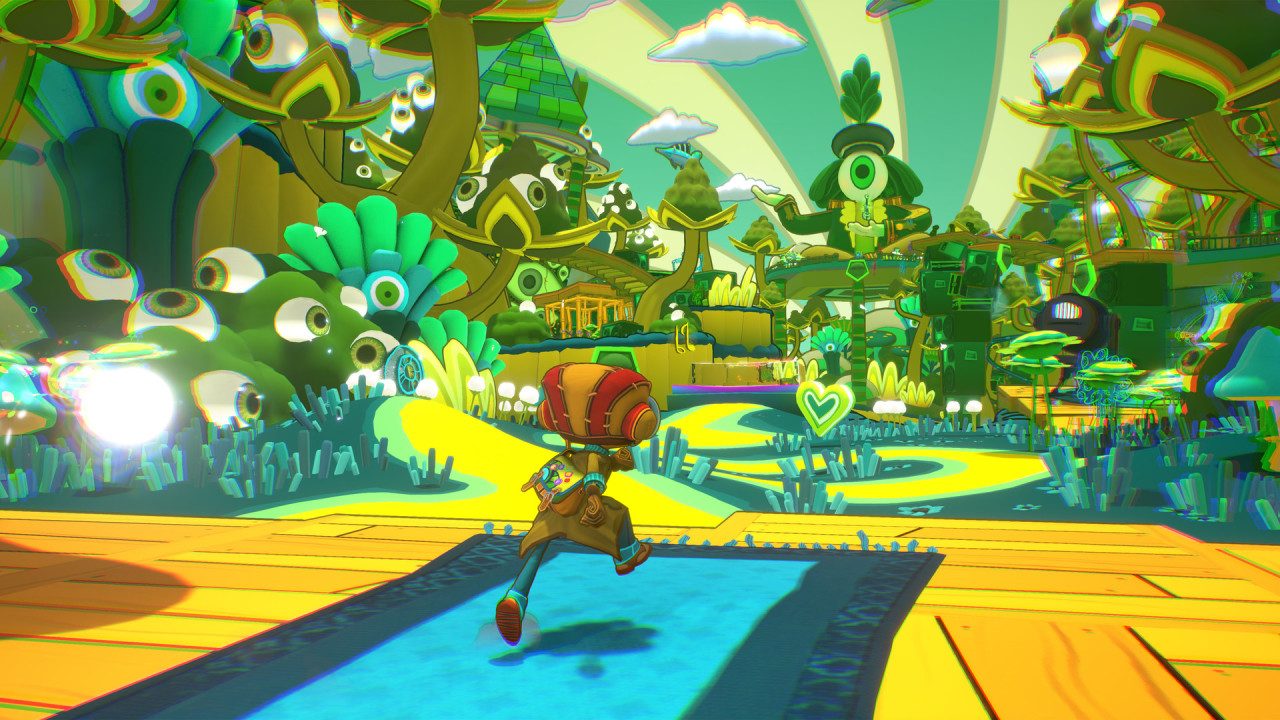 Psychonauts 2 features a post-game state where you can continue to explore the well-developed and substantial world. Even after 35 hours of gameplay, I have numerous hidden items to collect. There are a lot of secrets to uncover, and you'll need to find them in order to reach Rank 102, the highest level in the game that makes you incredibly powerful.

Otto Mentallis is one of the characters you encounter in Psychonauts 2. While you meet him in the main campaign, exploring his laboratory will help you make more progress in the post-game stage. He has a number of gadgets sitting around like the Thought Turner. The Thought Turner lets you access new parts of existing levels so it's necessary if you want to go for 100% completion.

The game also features a unique twist on the traditional Photo Mode. You'll need to pick up an in-game camera that allows you to essentially unlock it. Psychonauts 2 is filled with thoughtful additions like this that make the title quite special.

Psychonauts 2 features the ability to customize your powers through Pins. Pins are essentially ability points or runes you'd find in any other game. You can equip them to change damage output and cosmetic effects. While many of them seem to only trigger cosmetic changes, there are some that are inspired by traditional action role-playing games like Dark Souls and Diablo. For example, you can dramatically increase your damage output by lowering your health to a risky level. This Pin is rightfully called Glass Cannon. There are some others that allow you to withstand more damage, but it's up to you to find and equip the ones that suit your playstyle. 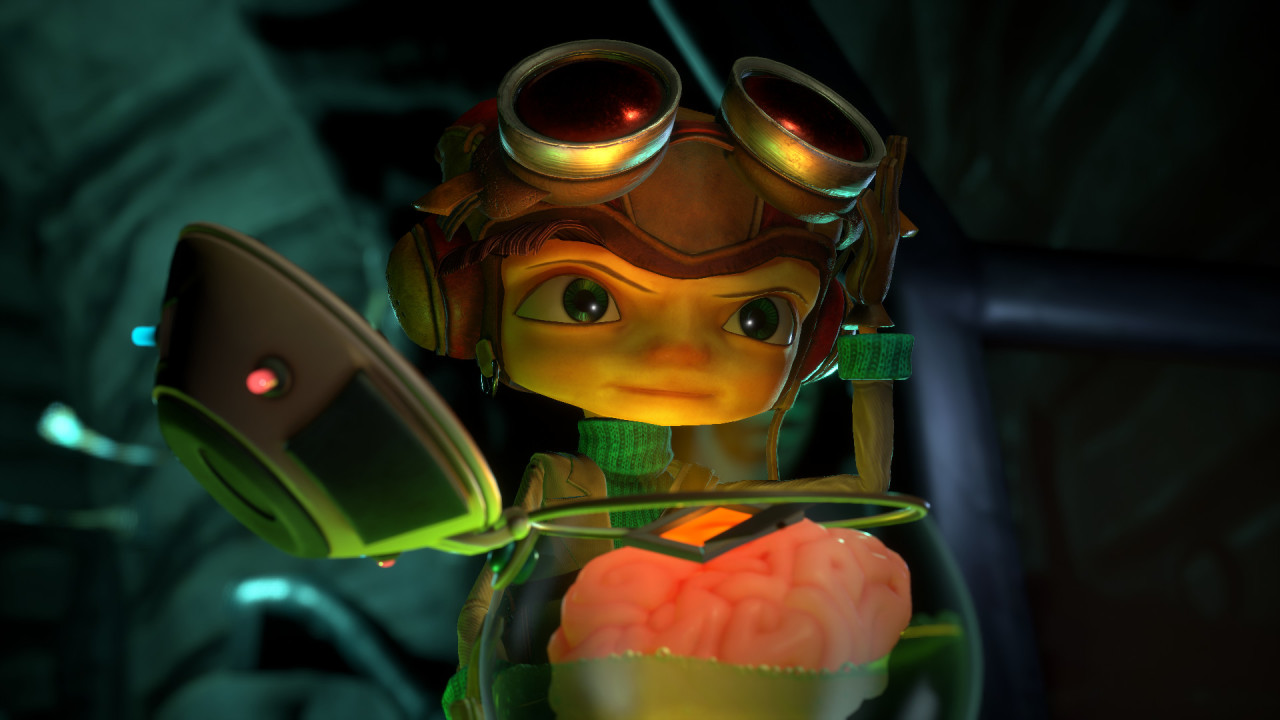 Abilities tie into level design seamlessly because in one encounter you may have to defeat fire-susceptible enemies, but in the other you may have to levitate or fly across an electrified path. Levels are self-contained for the most part, and you can access them through the Psychonauts headquarters hub world. The hub world is a fantastic place that is filled with lots of people and secrets. Be sure to scour the plants because a lot of collectibles are hidden in there!

Psychonauts 2 features a number of awesome environments to explore. For example, you'll traverse a land filled with teeth to one made up of eyes that are constantly watching you. Your objective is to use all of your psychic abilities and traversal moves, like clambering and double jumping, to make your way to the end. My favorite has to be a cave-like level that's lit by — what appear to be — bioluminescent mushrooms. The team did an excellent job of making sure that every new area you access feels different than the previous one. 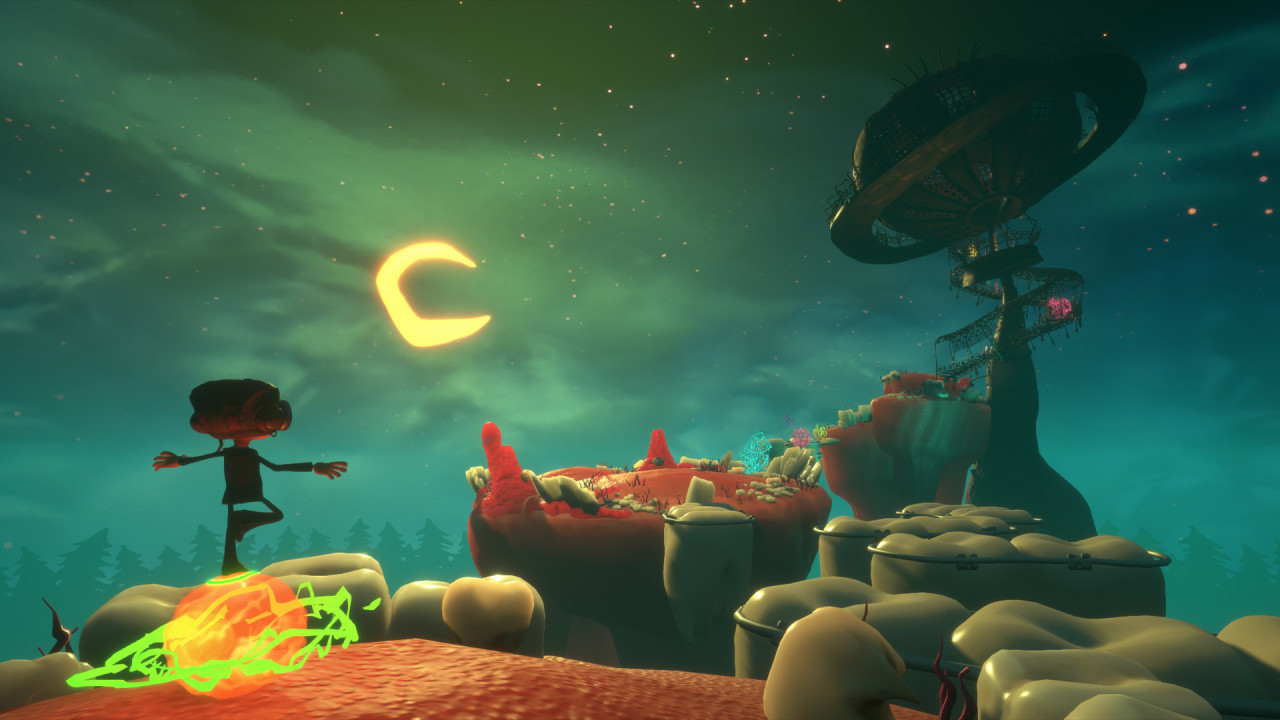 Psychonauts 2 looks gorgeous on Xbox One X and Xbox Series X. The visuals are crisp and the environments are as unique as they are odd. The game receives a substantial frame rate boost on Microsoft’s top-of-the-line console because it runs at a smooth 60 frames per second (FPS) at 4K resolution. However, there's also a 120 FPS mode — that limits the resolution 1440p — on Xbox Series X.

Psychonauts 2 also appears to feature high-dynamic-range lighting (HDR) only on Xbox Series X and Xbox Series S. The Xbox Series S version doesn't render the game at 4K resolution, but instead drops down to 1620p to maintain 60 FPS, and 1080p for 120 FPS. Lastly, on Xbox One X, the resolution appears to be 4K, but the frame rate is locked at 30 FPS without HDR.

If you don’t have a powerful gaming PC, you should check out the Xbox Series X version because, not surprisingly, it’s the best one for consoles. However, the console is still sold out everywhere and on eBay is going for around $900. You may have to wait a while to experience Psychonauts 2 at its best until the device is readily available. 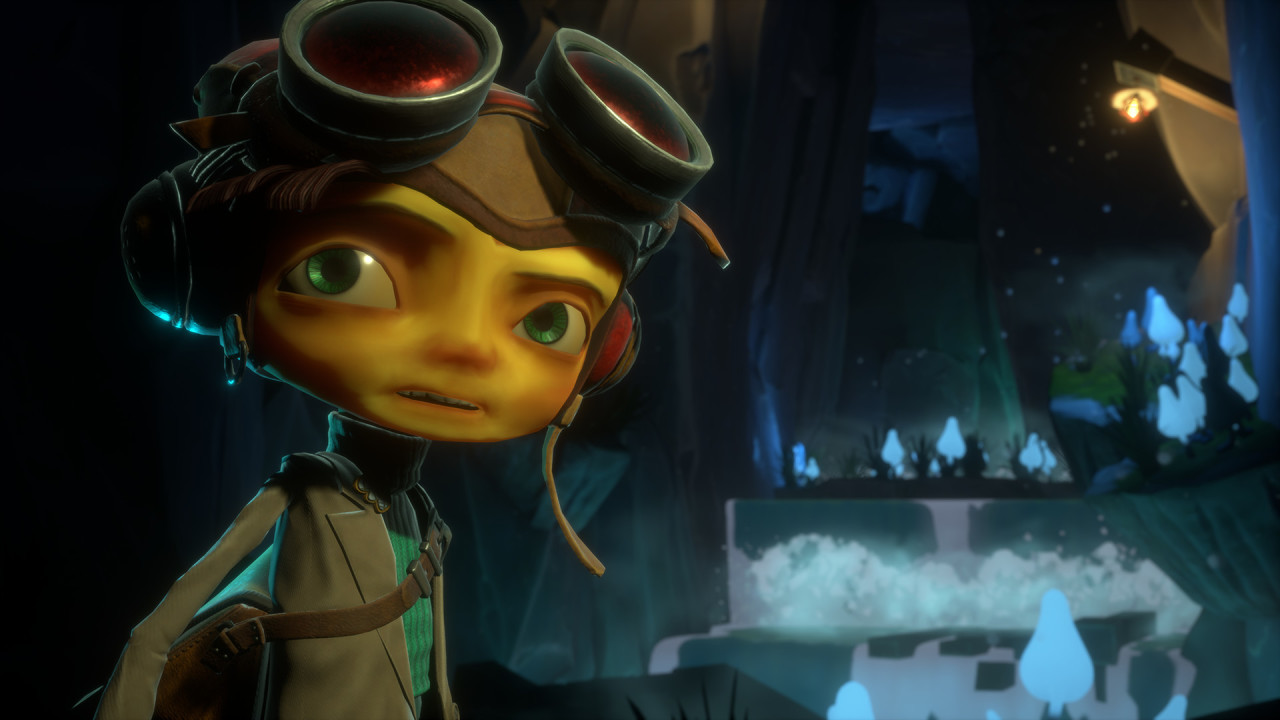 Developer Double Fine Productions has been working on Psychonauts 2 for the past six years, and it shows in terms of the overall quality. However, there are some problems that are quite noticeable. For example, during some of the cutscenes, the characters move in a very stiff manner that isn't present during gameplay. This can be somewhat jarring to witness because of the stark contrast between fluid gameplay and rigid cutscenes.

As alluded to earlier, the plot is a little tricky to follow at times, but it redeems itself quickly once you get past the first mission. I'd recommend watching the exposition video a few times in order to truly understand all the events that happened in Psychonauts and Psychonauts in the Rhombus of Ruin. It really helped me when I was somewhat struggling to follow along, especially when it comes to knowing who all the characters are and what your relationship to them is.

My only real complaint would be the voice acting. It’s good, but it seems a little disjointed for some odd reason. On the whole, Psychonauts 2 is a polished experience, but the voice acting seems like the weakest link. I’m not sure if the voice actors recorded their lines separately, but having actors together — even on a call — gives it more of an organic feel. This is sadly missing from the latest adventure. 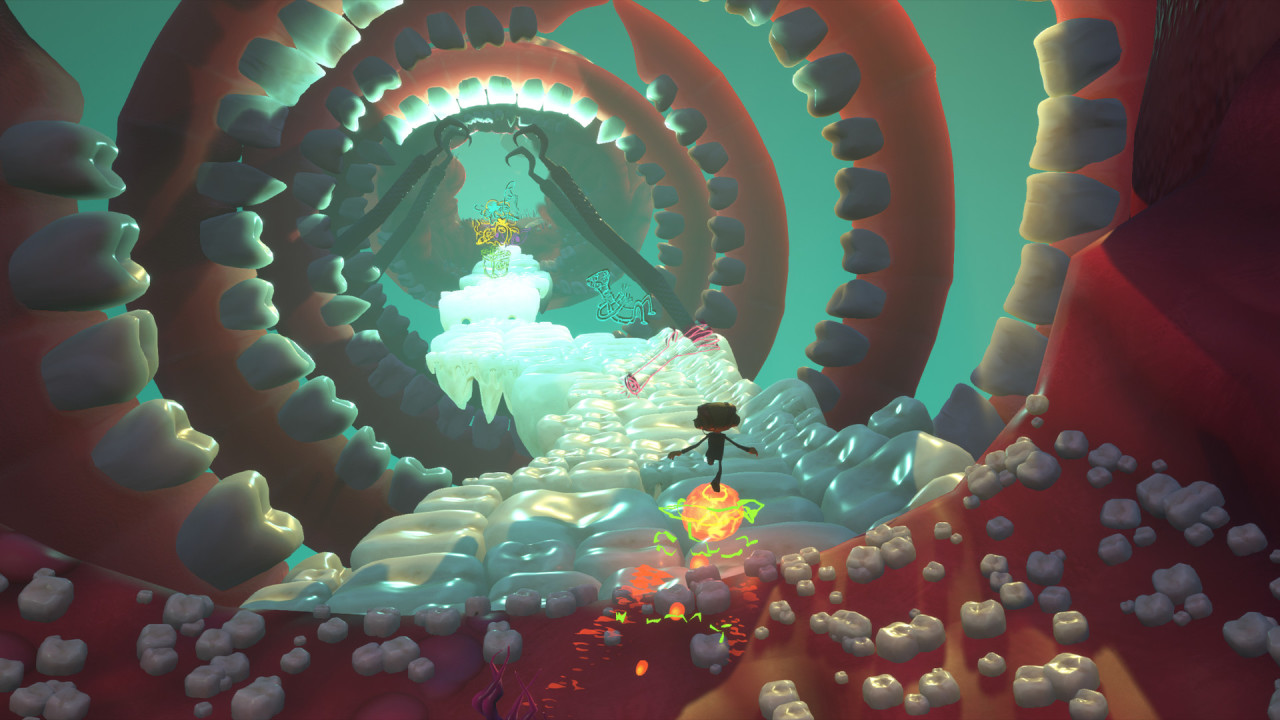 Overall, Psychonauts 2 is a great game, but it could’ve been even better had the voice acting been smoother and the plot slightly easier to follow. Some of the animations seem a little stiff too. Luckily, there are plenty of twists and turns in there so you’re always entertained. I’d definitely recommend picking it up, and if you have Xbox Game Pass, then it’s part of your subscription!

The scale of Psychonauts 2 is much larger than before and not what I was expecting. Then again, we've come a long way since the days of the original Xbox. When I initially saw the $59.99 price tag, I was a little confused, but after playing Psychonauts 2, it makes complete sense. This may be Double Fine Productions' most ambitious game to date and is a blast to experience! I can't wait to see what happens on the next adventure. Psychonauts 2 blew me away on Xbox Series X!

Microsoft provided a review code for Psychonauts 2 and the game was tested on Xbox One X, Xbox Series S, and Xbox Series X.