Just when we thought it was nearly over, Psystar has thrown us all a curve-ball and returned from the dead, emerging from the bankruptcy they filed for.

The news, which was reported by The Unofficial Apple Weblog, came in the form of a newsletter to Psystar's previous customers. In the letter (which we have also included below, thanks to TUAW), they stated, "As you may already be aware in late May, Psystar filed for Chapter 11 protection. Although this was critical to our continued daily operations, we now are ready to emerge and again battle Goliath. More information will become available in the coming days when we will be formally discharged by the Bankruptcy court. When life gives you apples, make applesauce."

Coupled with the announcement, they have introduced a new product, dubbed the Open(7). This, as Psystar say, "brings together OS X and Intel Nehalem Xeon technology," which will be the fastest and quietest system yet, according to the company. Pystar plans to include a new boot loader with upcoming systems (the Darwin Universal Boot Loader (DUBL) and TUAW says they're also going to introduce an open source release some time soon.

We don't know how they've done it, but expect to see more legal shenanigans in the near future as they continue on battling 'Goliath'. 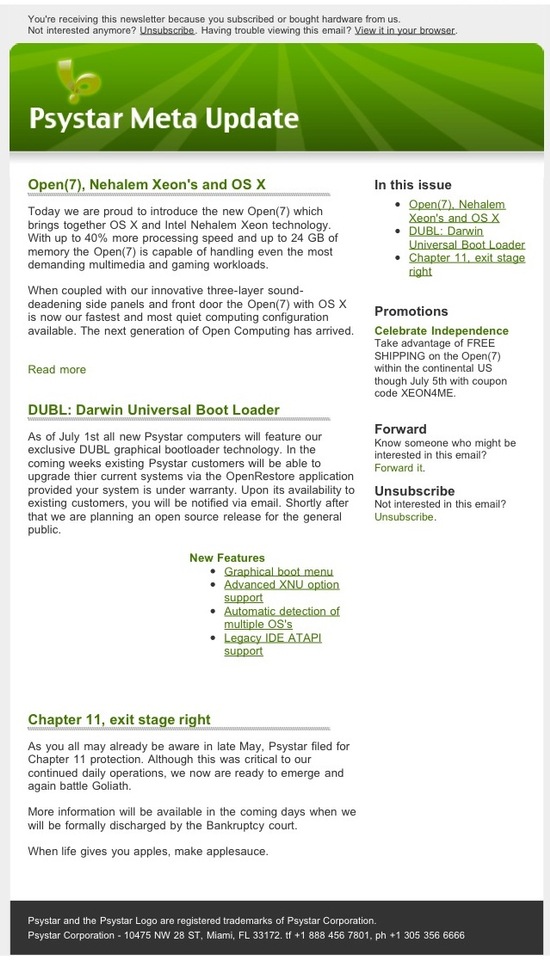