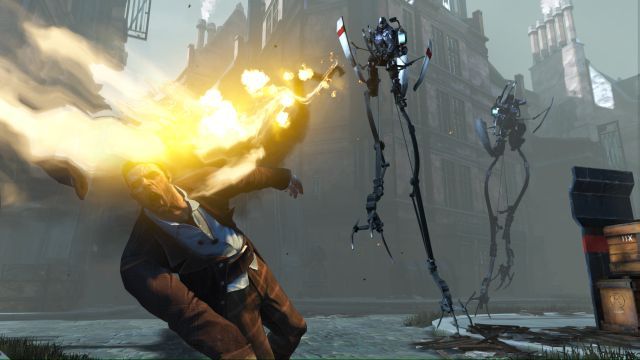 What if you could play a game that was mainly a first person shooter but also had  elements of stealth and even  a little bit of RPG gameplay... and then set it in a world unlike anything you have seen before?  Sometime next year you will, when Dishonored is released.

This is the next game from developer Arkane Studios, who previously made the first person RPG Arx Fatalis and Dark Mesiah of Might and Magic. At QuakeCon 2011 today we got to see a brief (if hands-off) gameplay demo of Dishonored which is being published by Bethesda Softworks.

The game itself takes place on another world that has a huge ocean and a massive continent. However, the majority of the game takes place in a city on the \ world entitled "Dunwall," that exists on a small group of islands well away from the continent. Visually the game, which uses Unreal Engine 3 as its basis, is a mix of Victorian era streets and cobblestones with some modern day elements and some futuristic bits . For example, the very first thing we saw in the demo is a modern looking ocean freighter coming into the city’s docks. However its hull looks different than any Earth vessel and it carried the dead carcass of a strange whale-like sea creature on top. In other words, this is definitely not our Earth nor an alternate timeline. It’s a completely different setting.

Arkane Studios isn’t talking much about the story for Dishonored at the moment. We do know that the main character is a bodyguard for this world’s empress but he’s on the run after she is murdered and he is blamed for it. In addition to physical weapons such as guns and knives, this character has some supernatural abilities as well. Oh, and apparently there’s a nasty plague that’s killing off lots of people in the city.

The QuakeCon demo started as our “hero” is attempting to assassinate someone in the city. We were told that there are actually a number of side quests we could take if we wanted but for the sake of the demo the developers pretty much charged through to get to the main objective. We were also told that we could shoot everyone out in the open or use stealth completely to accomplish the same goal. Our demo of the game mixed things up and used a combination of both techniques.

We soon discovered that even this world’s small rats were deadly and could swarm over you kill you and other NPCs in the game. The rats can kill you quickly unless you get to an area with a lot of light; that chases them away. There are some technological dangers such as the ”wall of light”. This is basically an electrical barrier on some city streets that can fry you if you get too close.  Near the end of the demo we saw some unusual one-man mech-like vehicles that looked a little like the Strider in Half-Life 2. 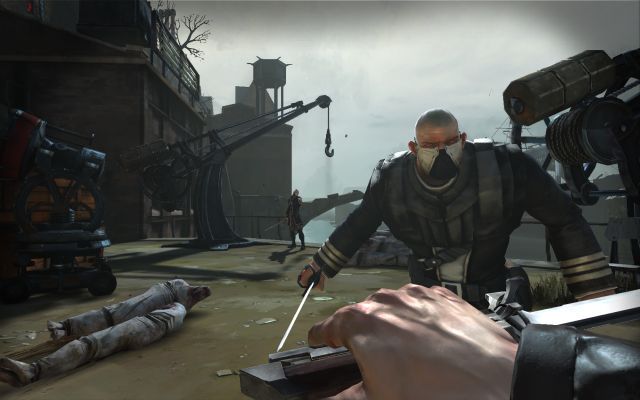 Our character can use some special abilities to jump higher, teleport in between two locations and push and destroy objects like doors. He can even possess rats with his mind to make them walk into areas he would normally not be able to get to in the game

Even though this game has stealth elements, it’s clear that Dishonored is much faster paced than most stealth action games. That’s due to the fact that you could play the game simply as a first person shooter with guns blazing. However we suspect that playing the game in that way would be extremely difficult, so it’s good that it allows you to sneak up to a particular target and either kill him with a knife or even just choke him until he goes unconscious. There’s also a great amount of freedom to move about in the city. You are not just limited to walking the streets; you can also jump up and run on top of building roofs if you so desire.

Even though we were shown a brief demo, Dishonored already has us excited with its gameplay design, its unique looking world, the non-linear way you can accomplish missions and more. We will hopefully learn more about the game before its schedule release for the PC, Xbox 360 and PS3 platforms sometime in 2012.