On March 23rd, the Windows Store exceeded the 50,000 Windows 8 app mark, about five months after the launch of Microsoft's latest OS. Today, a check of a website that monitors the number of apps in the store shows that there are currently 65,891 Modern apps that are available for download worldwide. 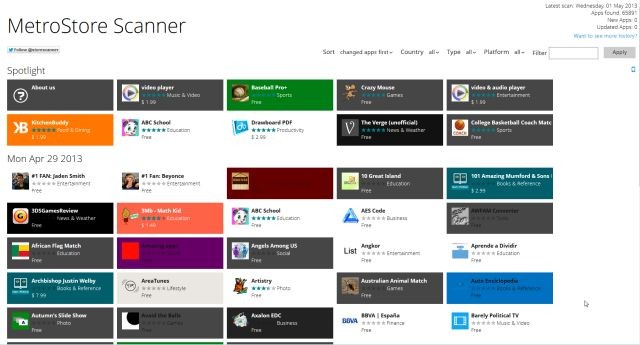 The third party MetroStore Scanner website posted the updated numbers today, showing that there's been a significant number of new apps added to the store in the past few weeks, compared to the first quarter of 2013 where the numbers of published apps seemed to slow down. It should be said that Microsoft has never issued any official Windows 8 app numbers on its own.

While the Windows Store is still filled with a ton of RSS feeds that have been converted to apps, there's been some interesting new additions and updates in the store since it went past the 50,000 mark in late March. Microsoft has launched major updates for many of its own in-house developed apps, including Xbox Video, Skype, the Bing-based apps and more. New third party Windows 8 apps include MLB.TV, Nokia Music, Deezer and GEICO Insurance.

Microsoft has plans to launch a number of new Windows 8 apps in the coming months, based on the leaked builds of the Windows 8.1 OS, including an alarm, calculator and an app called Movie Moments that seems to be an automated video editor.