VidOn is a relatively unknown company but they've produced a fairly interesting and unique TV box. This includes their own launcher, their own customized version of XBMC, and have also produced a pretty original design for the actual device. If you haven't already checked it out yet, take a look at my first impressions and unboxing here. Over there you'll also find a full gallery of images of the VidOn TV box and everything that it comes with.

The VidOn TV box measures in at 150mm x 90mm x 30mm. It's definitely on the smaller end for these type of devices, but it's not small enough to really carry in your pocket like you would with the Smartron S805, however. On the front of the device there is an IR receiver for the included remote, it has no markings on the left or right side and the underside of the device just has four rubber feet. The back of the device is home to all of the inputs, including the 5V/2A power-in, 10/100 Ethernet, a full-sized HDMI port, two USB 2.0 ports and an optical audio out. It also has a full-sized WiFi antenna coming out from the back. 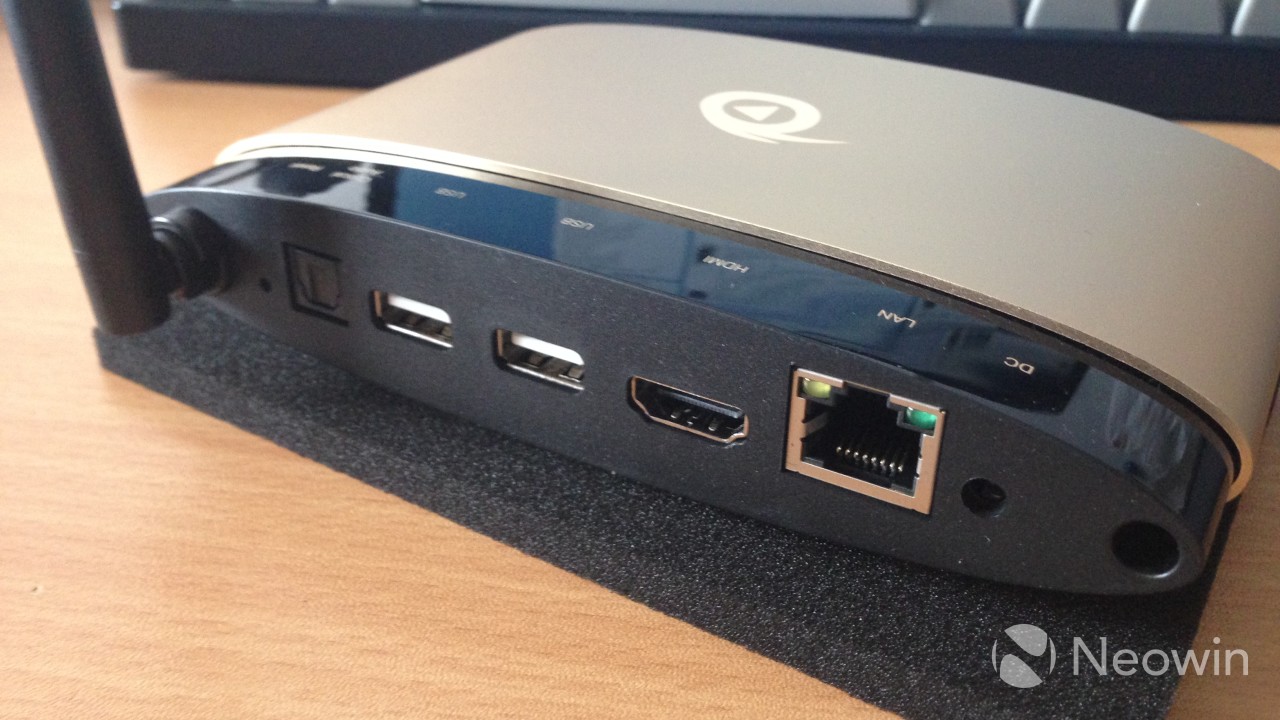 The device itself has a gold-toned aluminium housing with shiny plastic towards the back of the device and on the front panel for the IR receiver. The unit is curved, with the aluminium body taking a sharply pitched oval around the device. The four rubber feet, mentioned above, allow it to sit flat on a surface. It feels solid in the hand and there are no moving parts or anything "loose" when you shake it.

The VidOn TV box has a quad-core Cortex-A7 (A31s) CPU and a dual-core PowerVR SGX544 GPU. It has a conservative 1 GB of RAM and 8 GB (about 5 GB is available for use) of internal storage. It only supports 2.4 GHz b/g/n WiFi which is somewhat limiting. It doesn't have Bluetooth, although you can add a Bluetooth USB dongle if desired. 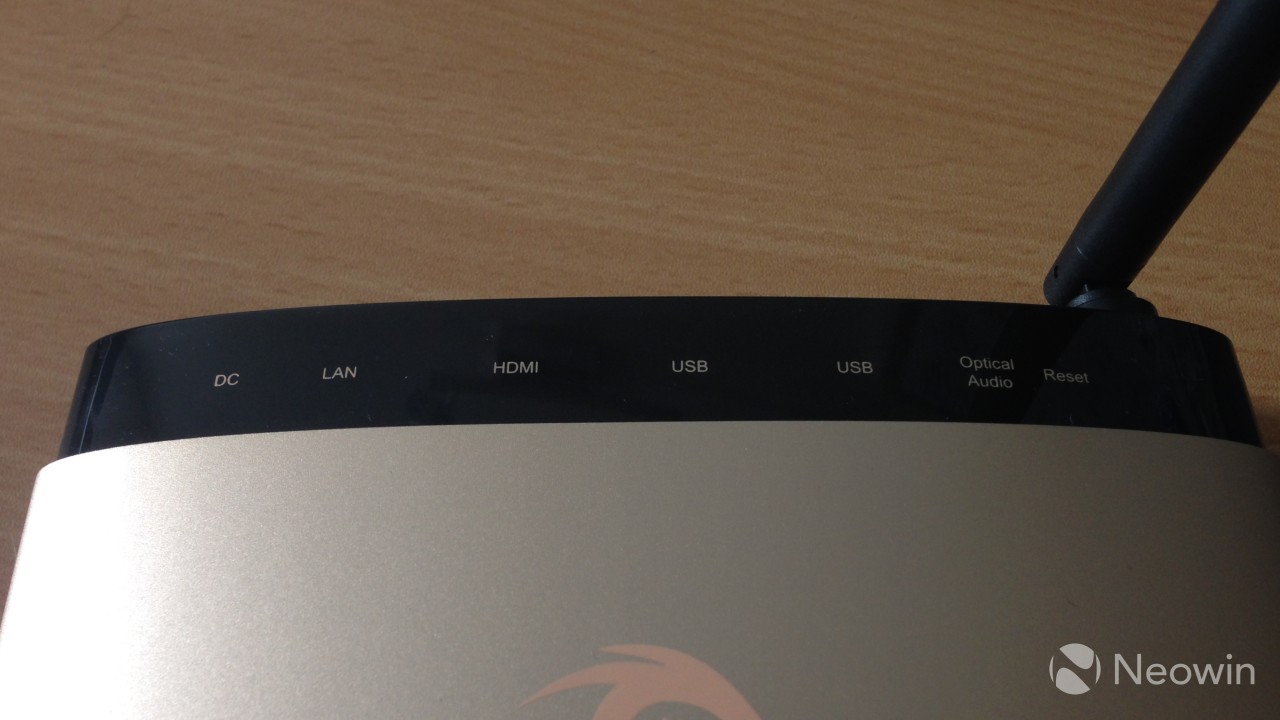 The benchmarks weren't anything to write home about at all. They were surprisingly worse than what I expected, which was strange since the video playback was so smooth 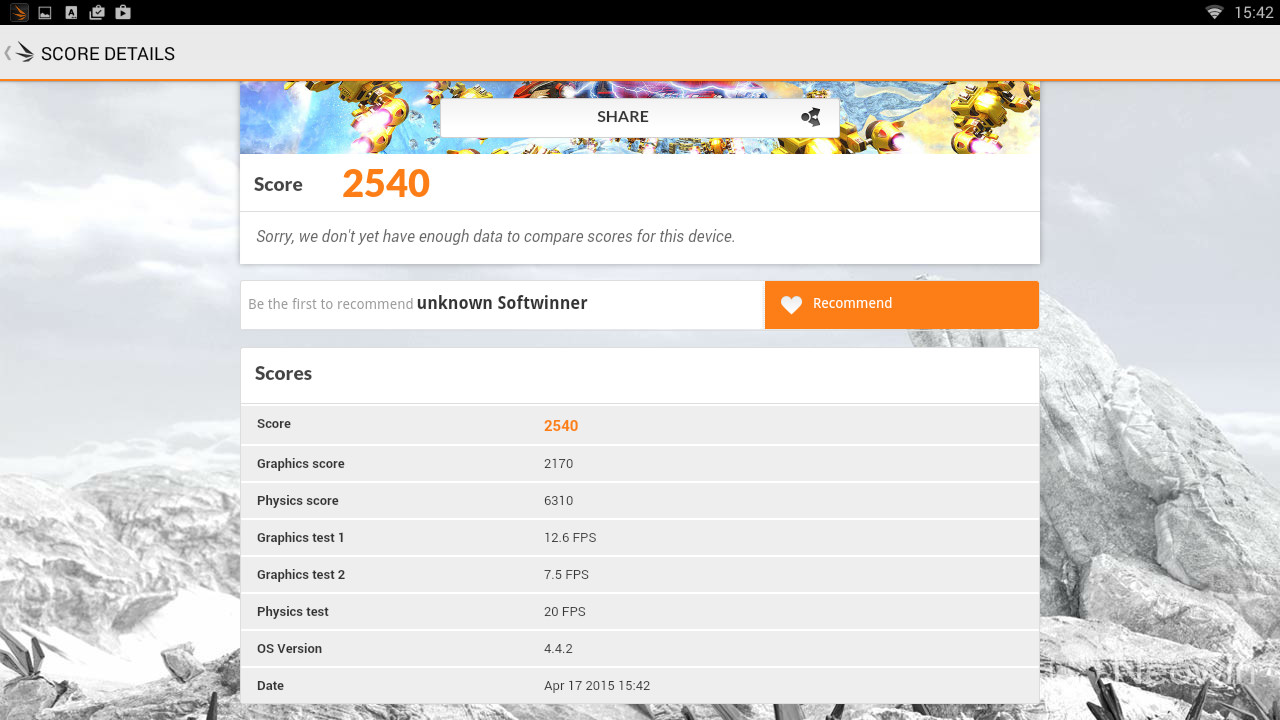 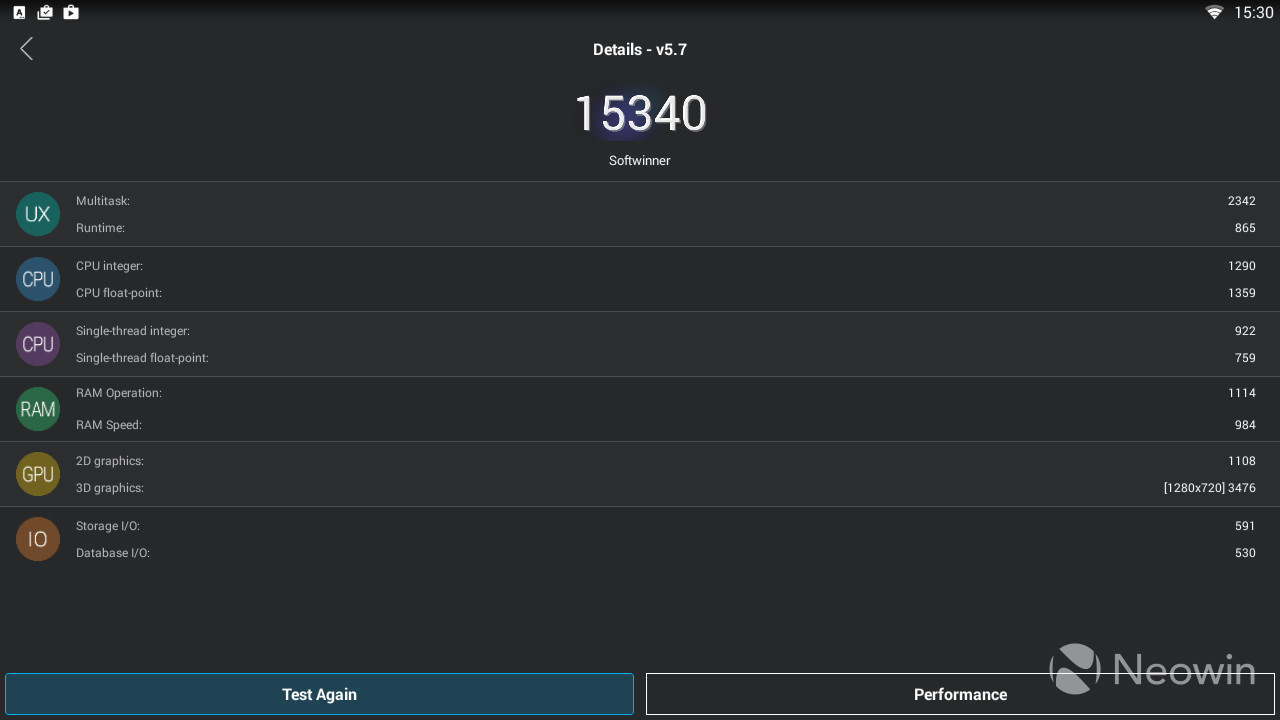 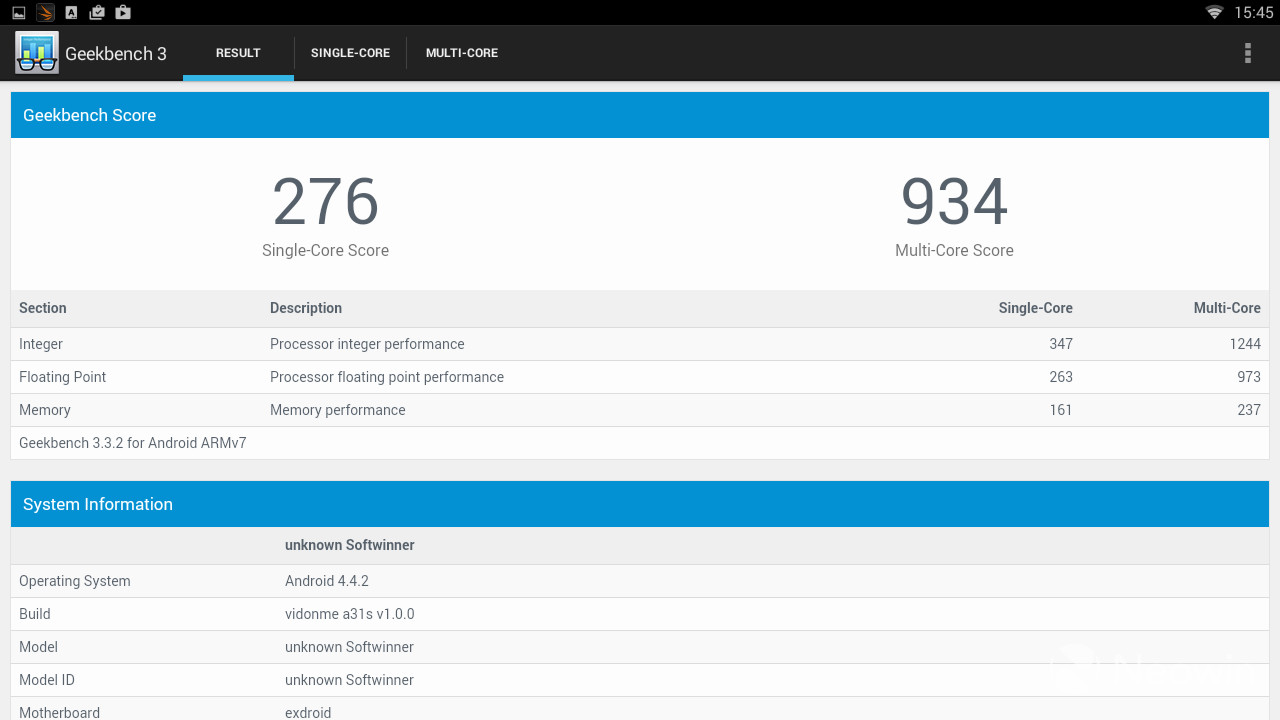 I played both 720p and 1080p content in XBMC in a variety of different formats -- It all played as smooth as you would expect. I didn't experience any sort of frame skipping or lagging. There was some initial lag with loading my video library (which featured about 1800 different videos) but that was it, and it didn't affect the playback at all.

I did run into issues when trying to stream from SMB/Samba shares. Out of the four or so movies I watched on the VidOn TV Box, some would run into issues about half way through and at one point it just suddenly closed. I'm not sure why this happened but it looks to be a software issue rather than an issue on my network.

Netflix ran without too much difficulty, but there was one peculiar aspect I'll cover a little later.

It comes with Android KitKat and a customized IR remote-centric launcher. Indeed, VidOn has designed a very clean and straight forward launcher that allows a user to easily navigate through the different apps and settings. You can install apps on your own through the Play Store, but it does come with a couple of apps on the homescreen (like Netflix and Hulu) which you simply click on and they automatically download and install. That is, it doesn't come with bloatware, but gives you an easy way to install them if you wish. This is one area I found a little strange though, because after pressing on the Netflix icon it never actually downloaded. I had to go through and manually download it from the Play Store, which wasn't the easiest thing to do on an IR remote. 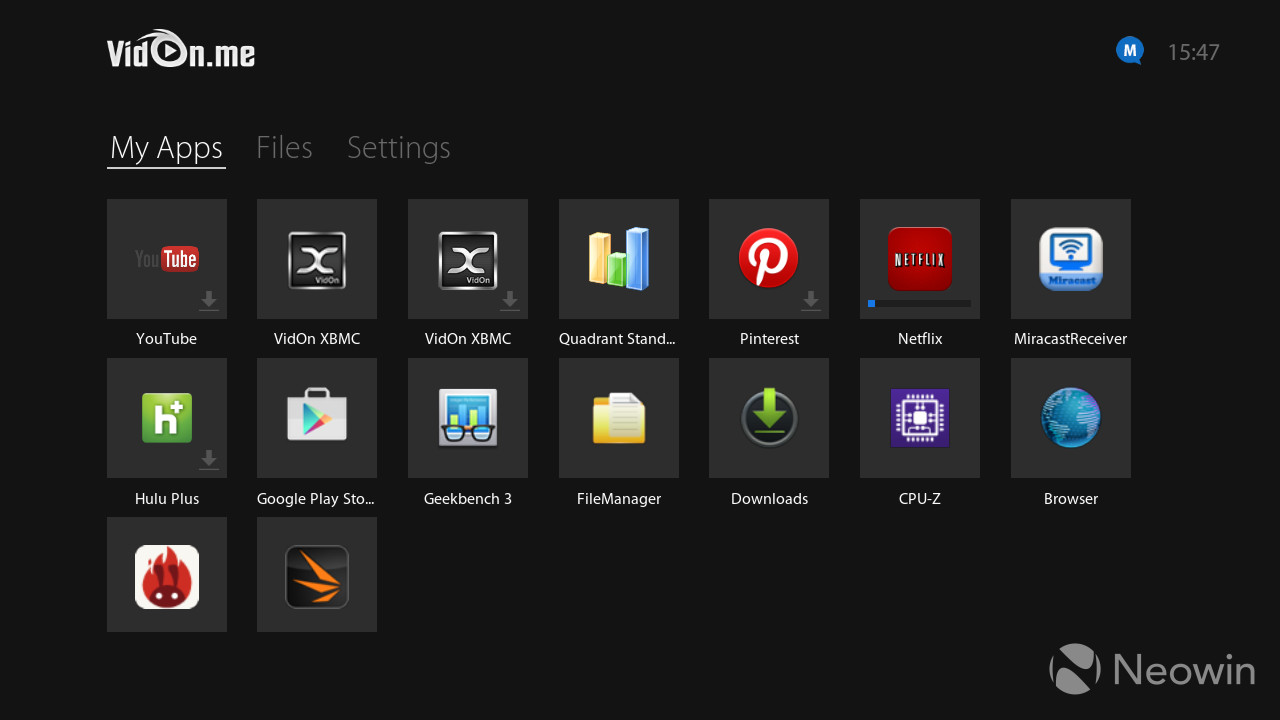 It comes with two different XBMC applications: one has 'exclusive' features and another is the standard distribution. The 'exclusive' version is subscription only, meaning you have to pay a membership fee to VidOn ($15/year) to use it. These features include Blu-ray menu navigation and enabling OTA updates -- without it you'd have to manually install the updates. I can confirm that the Blu-ray menu navigation does in fact work (and works well) but I personally don't have much use for it. Some other features include HDMI True-HD/DTS-HD passthrough which was absolutely lovely.

You don't need a subscription to use the device, but it does seem at least somewhat useful. The device comes with a one year free subscription, meaning that if the intended life cycle of the device is two years then you'd only really need to purchase an extra year subscription at best. At $15/year it won't really break the bank either.

It's worth mentioning that if you're not a fan of the default launcher, there is an option in the Settings menu to enable XBMC to automatically load on boot. It's also worth mentioning that, at the time of reviewing, the latest version of XBMC was Gotham. It's likely that a newer version will be released, but given that they have to manually modify it themselves it is taking longer than usual to push the update.

The VidOn TV Box doesn't come with anything too fancy. It includes a remote (with a battery), one $15 subscription scratch-card, a HDMI cable and a power plug. One nice thing it did come with was a fairly extensive instruction manual in English that shows a user how to specifically connect the device to an amplifier and so on.

The remote is fairly basic, with only having directional buttons, a selection button, an "off" button (for sleep mode), a menu button, a back button, a home button and two volume buttons. I found the remote wasn't the world's greatest in terms of direction: you have to aim the remote right at the IR receiver otherwise the VidOn box doesn't register it. The remote itself was built pretty well, however, and was coated in a soft plastic that made it feel really nice to hold. 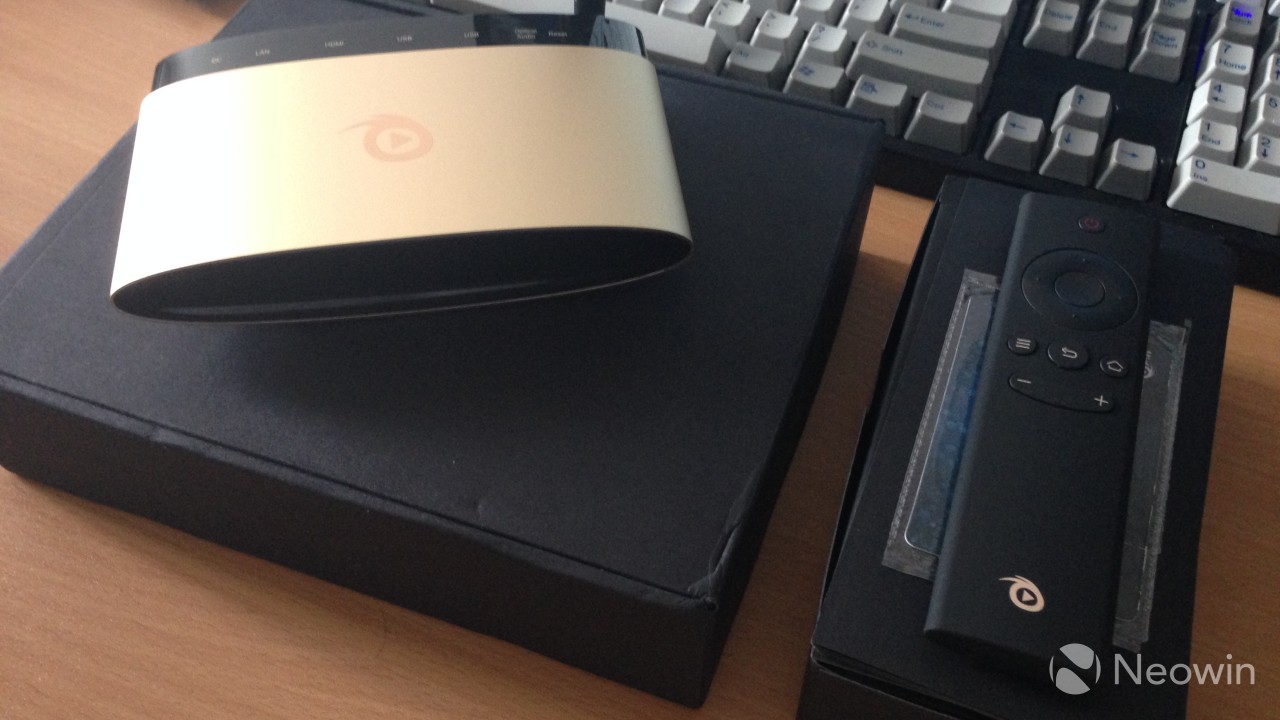 The VidOn TV box has a lot of benefits, but it has some flaws as well. Speaking of the flaws, it lacks 802.11ac support, 5 GHz WiFi support, and lacks gigabit Ethernet. One feature it's also missing is a USB 3.0 port. On the plus side, however, is that it can support an external 3 TB HDD and even with the lack of USB 3.0 it didn't lag when playing or loading any films.

For a $69.99 device it's not exactly the cheapest out there, especially when stacked against the MK808B Plus, but it does have a number of notable elements as well. Specifically it's the Blu-ray menu support and supporting DTS-HD passthrough. It also has things like optical audio out which make it significantly more appealing. Because of the whole subscription thing it means that the device will almost certainly get updates from the manufacturer, as opposed to some of the cheaper ones which might never get them. You don't have to pay $69.99 all the time, however -- resellers like Geekbuying have the device for $49.99. At that price point it makes it a much easier to swallow purchase. If you're primarily after streaming from your network then you might look for something that is more network-focused, but if you're just planning on playing films off USB then you won't have many issues at all. I look forward to what VidOn will bring with their next generation devices.