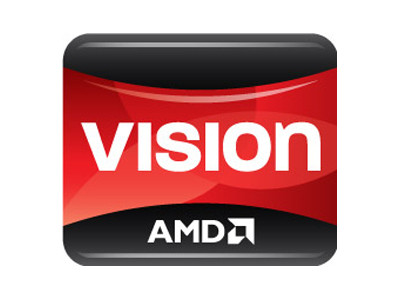 Back in 2009, AMD wanted to revolutionize how people bought their PCs with its VISION branding. Instead of putting the focus on individual CPUs and graphics cards, the VISION brand was supposed to make things simpler for people to figure out which PC was best for them. The basic VISION PC was supposed to be for basic web browsing, while Vision Premium PCs could handle video and games. AMD Vision Ultimate PCs could handle high-end applications like video and photo editing programs.

AMD continued to promote the VISION brand in 2011 but as of late we haven't heard much about this effort. Now a new report from SemiAccurate, using unnamed sources, that AMD plans to remove the VISION logo from its current and upcoming PC processors, along with the PC systems that have AMD chips inside.

The article doesn't really give a reason for AMD ditching the brand. However, the company has been fighting to keep itself above water as the PC industry as a whole slows down and AMD continues to lose ground to its main rival Intel. It's possible that AMD feels that the VISION brand just didn't do enough to boost sales of of the PCs that had its chips inside.