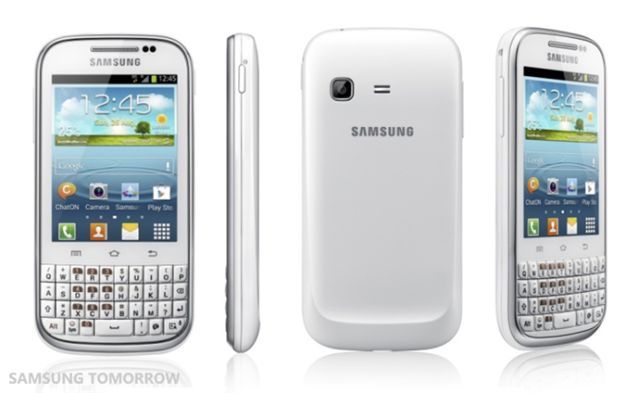 Most of Samsung's Android smartphones are a touch screen only affair when it comes to their keyboard inputs. Today, the company officially announced plans to launch an Android 4.0 smartphone that will include a physical keyboard for the text messaging heavy audience.

The official company blog Samsung Tomorrow has posted the first details of the Galaxy Chat, which has a three inch 480 x 320 resolution touch screen combined with a QWERTY-style keyboard on the bottom. It also has four GB of on-board storage and a MicroSD card slot to expand the storage up to an additional 32 GB. There's a two megapixel rear camera but there's no front facing camera at all.

All in all, the hardware specs on the Galaxy Chat sounds like it will be a relatively cheap device. So far, Samsung has only said that the smartphone will have a "competitive price point" when it is launched.

The company will first release the Galaxy Chat in Spain later this month and will expand its reach to include other parts of Europe in the near future, along with Latin America, the Middle East, China, Southeast Asia, and Southwest Asia. Oddly, there's no listing of a US release for the Galaxy Chat.