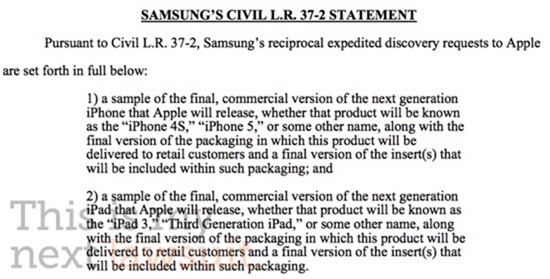 Samsung has just filed a motion on Friday for the rights to see Apple's upcoming iPhone 5 and iPad 3. The motion requests that Samsung's lawyers be able to see a final (commercial) version of the iPhone 5, or rumoured as the iPhone 4S, and the iPad 3.

If the motion does pass, only Samsung's lawyers will be able to visibly see the iPhone 5 and iPad 3, and not the engineers themselves. Samsung's request is to prevent any future lawsuits between the two companies, as the Droid Charge and Galaxy Tab 10.1 will be releasing around the same time as Apple's counterparts.

Thisismynext.com reports that the motion is for Samsung to detect any similarities between the two products so they can prepare for any (potential) future legal action from Apple. However, there may be one major hiccup, as Samsung already announced its products, where Apple has not.