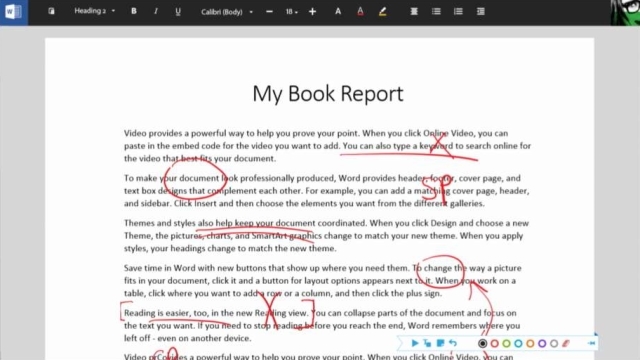 Microsoft showed a brief glimpse of its upcoming touch-friendly Office apps for Windows at Build 2014 last month, but now it appears a better glance at the apps has leaked online.

In a presentation from Microsoft Research, Word, Excel, PowerPoint, Lync and Office tools for Windows 8.1 can be seen with interfaces somewhat different from what Microsoft showed at Build. The presentation, uploaded May 14, shows the way a stylus can be used within the apps. It's not known when the presentation was actually made, meaning the interface could have changed since it was made.

The "Gemini concept version of Word," the codename for Microsoft's touch-friendly Office suite for Windows, is first shown at the 20:50 mark of the video, followed by the other apps. Screenshots of the apps can be seen in the gallery below.

Microsoft's timing for releasing the video is notable, as its upcoming Surface mini tablet, which will be revealed on Tuesday, will make heavy use of stylus input, the topic of the research video. While Neowin hasn't heard that Microsoft will announce the touch-friendly version of Office at the Surface event, the tablet may have been designed with the apps in mind.