Nobody likes COVID-19, but unfortunately it looks like it's going to stick around for at least a little longer, and for many that means working from home for the foreseeable future. To help remote workers, Microsoft has released four new Modern devices: a USB Headset, a Wireless Headset, a USB-C Speaker, and a Webcam.

Microsoft sent me these four devices to try out, and after a week of constant use, I'm sharing my experiences.

The first device I tested was the Modern USB Headset. I already had a Logitech USB headset that I've been using during the pandemic, so thought this would be similar and I wouldn't have much to say about the device, but I was wrong. 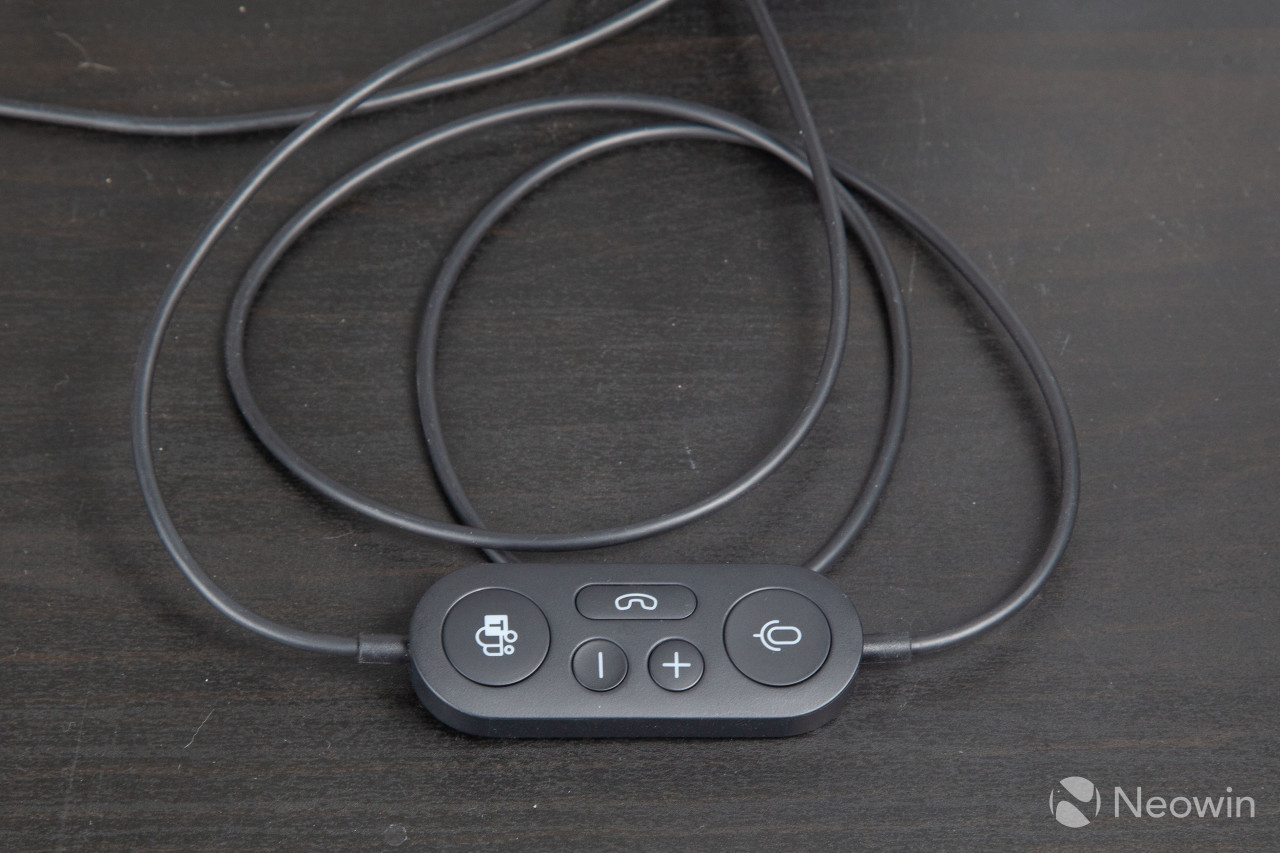 Before I get to performance, I'll point out that the headset has five buttons inline with the wire that connects to the USB-A port. The two largest are the mute and Teams button on either end of the console, while the volume up/down and phone button are in the middle. Since all of these devices are integrated with Teams, pushing the mute button will toggle the mute function within the Teams app, letting everyone know whether you're muted or not. If using other services, such as Zoom, it's possible to be muted on the headphones and other meeting participants won't know you're muted. This is either a bug or a feature, depending on how you look at it. The same is true for the wireless headset and the USB-C speaker.

As for performance, the Microsoft Modern USB headset was leaps and bounds better than my Logitech headset. Although speaker quality was very similar, people listening to me said that the voice quality was far and away better, with one coworker even saying that, "it sounds like you're actually in the room with me." In addition, the headset itself is soft and feels good on your head, even for hours at a time. 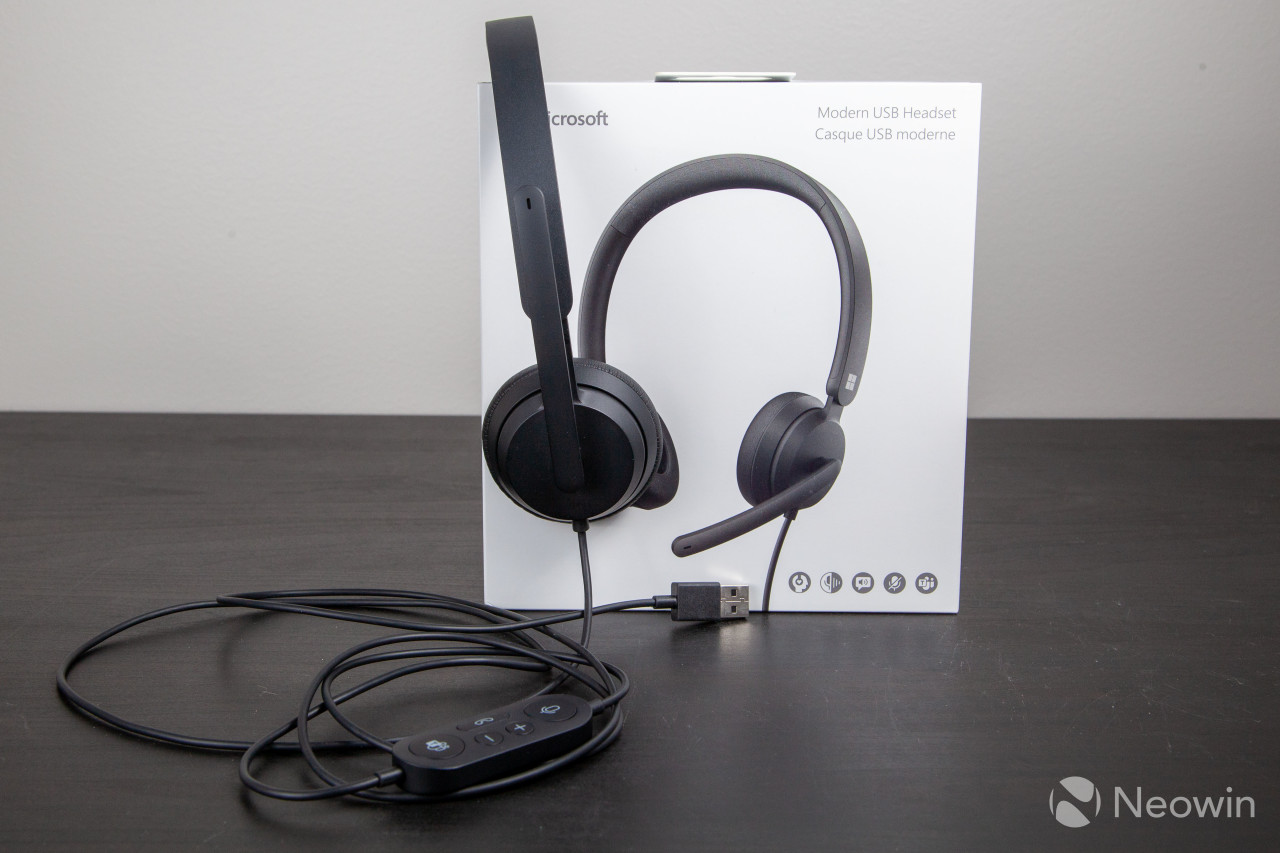 Despite not being able to get the Teams button to work, the audio and microphone quality were top notch. If you're on calls a lot, the Microsoft Modern USB Headset, priced at $49.99, is a steal.

The wireless headset is an interesting device. The package includes not only the headset itself, but also a USB dongle for connectivity. The headset itself feels very similar to the wired version, but instead of a wire that houses the various controls, small buttons are put on the right and left earphone. On one side is the power button and the Bluetooth button, and on the other side is the Teams, mute, and call button. Instead of dedicated buttons for volume control, the non-microphone side is a dial that actually turns to adjust the volume. It's a clever design that makes it easier to adjust volume during a call. To help you identify the buttons, Microsoft includes an insert that highlights the functions, as you can see in the picture, below. 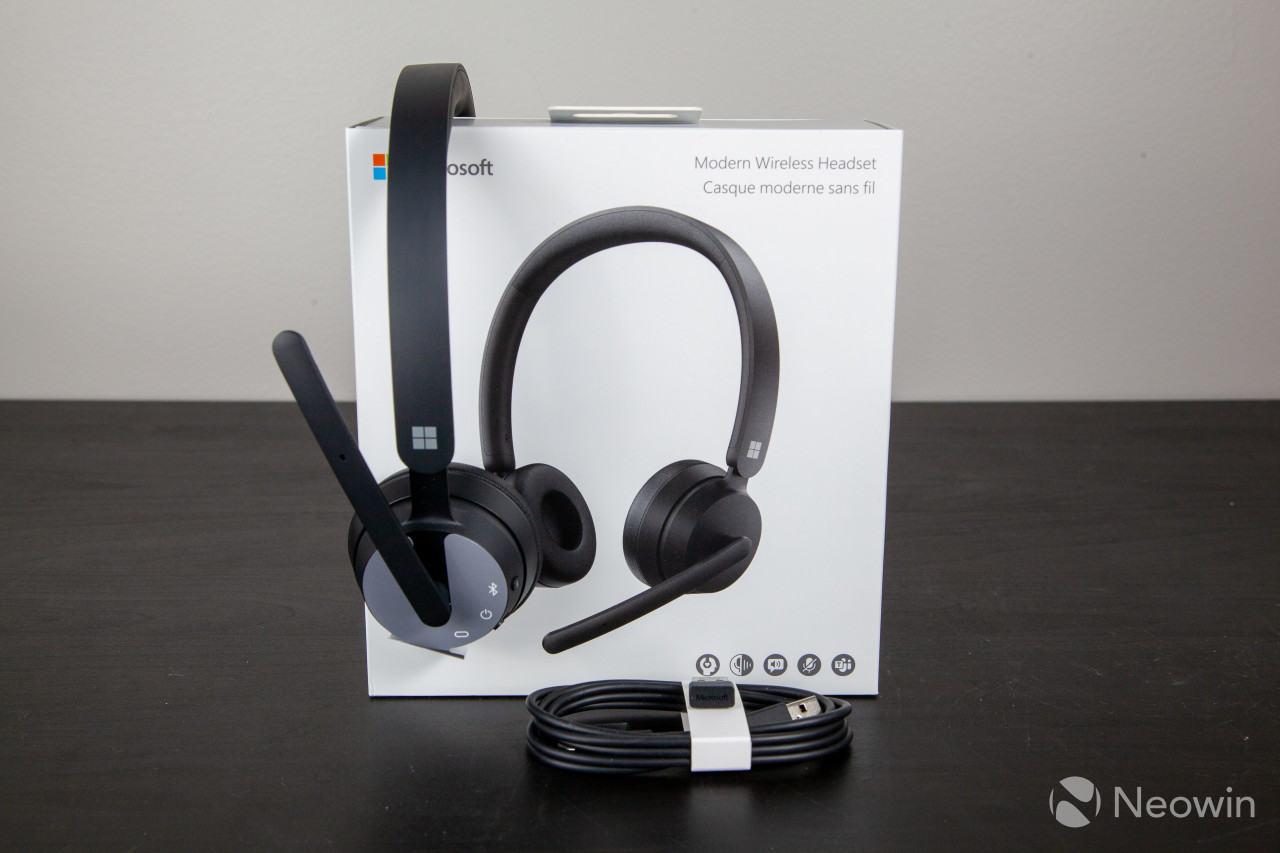 As for call quality, it was a mixed bag for me. When connecting with the laptop's built-in Bluetooth, the sound quality was a little crackly and distorted, bordering on unusuable. I found this strange, because I've never had trouble with any other Bluetooth device on this laptop. However once I connected the included USB dongle, audio quality was close to perfect, only a half-step below what I was hearing with the wired headset. I'm not sure why the included dongle works better, but it's something to consider if you were planning on buying one to free up a USB port.

Controlling the headset is much more difficult than the wired version as well. The buttons on the side are tiny, and there's obviously no way to quickly look and see if the device is muted or not. When using Teams, it's not an issue because you can look at the application itself, but when you join meetings on other platforms, you'll find this a minor annoyance.

The battery life is very good. When you first turn them on, a voice tells you how much time you have left ("More than 15 hours left"), and they announce what they're connected to ("Connected to USB Link"). After using them for a few hours over the course of a day, they still reported over 15 hours of battery left, so you should be able to go a week or more before having to charge the device.

Considering these cost $99, double the price of the wired version, I can't recommend them unless you're deadset on owning a wireless headset.

I went into the review thinking the speakerphone was my least favorite of the group, but ended up loving it the most. I assumed that, like most speakers, it would pick up too much interference from my window that's a few feet from the device, or from the fan that's blowing in the room, but that turned out to be an incorrect assumption. 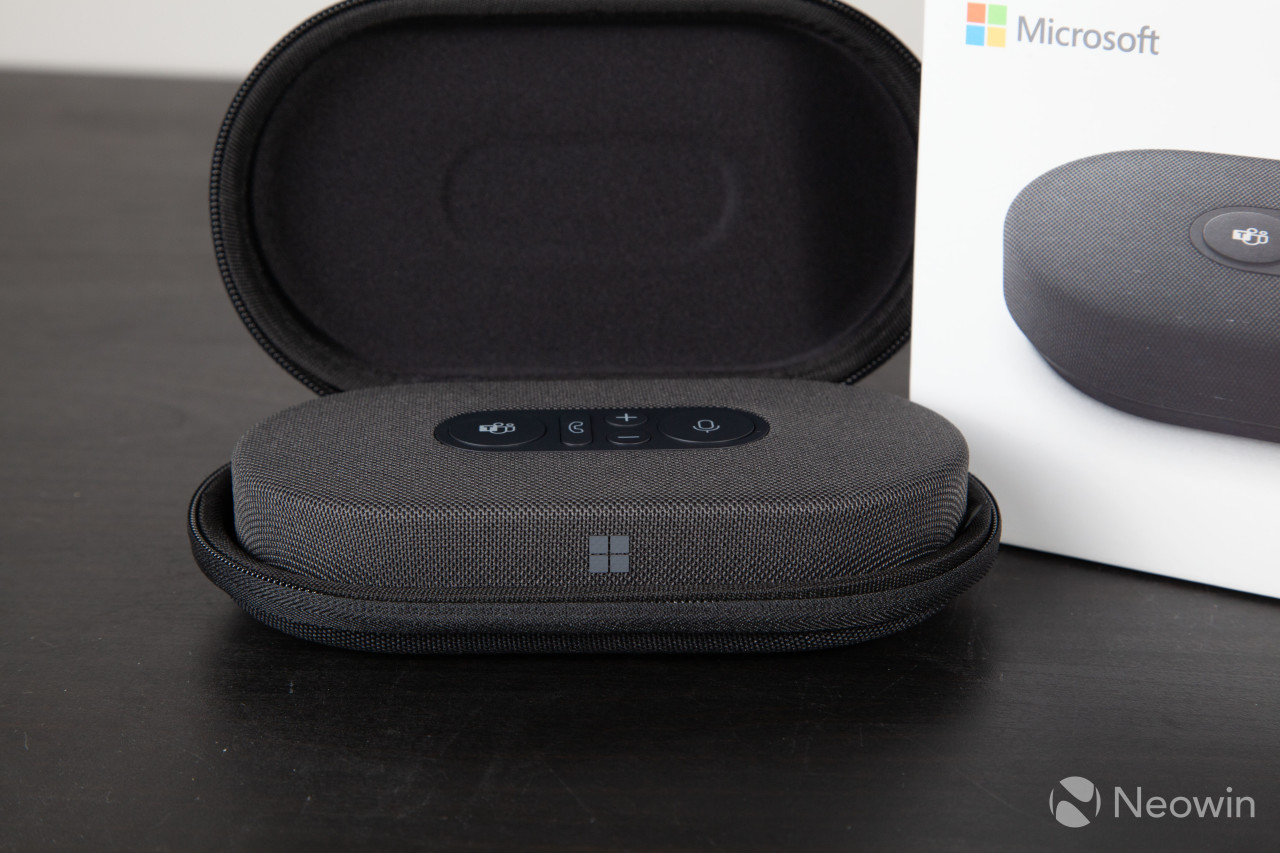 For whatever reason, this is the only device that includes a carrying case of any sort, but it's a welcome addition, especially if you plan to toss it into your laptop bag. The Microsoft logo is front and center, and the same buttons that are on the headphones are also here - Teams, a phone, volume up/down, and mute. As with the headphones, the mute button integrates with Teams, but when using other tools such as Zoom or GoToMeeting, there's the potential to "double mute" yourself. Whether this is a bug or a feature is up to you. 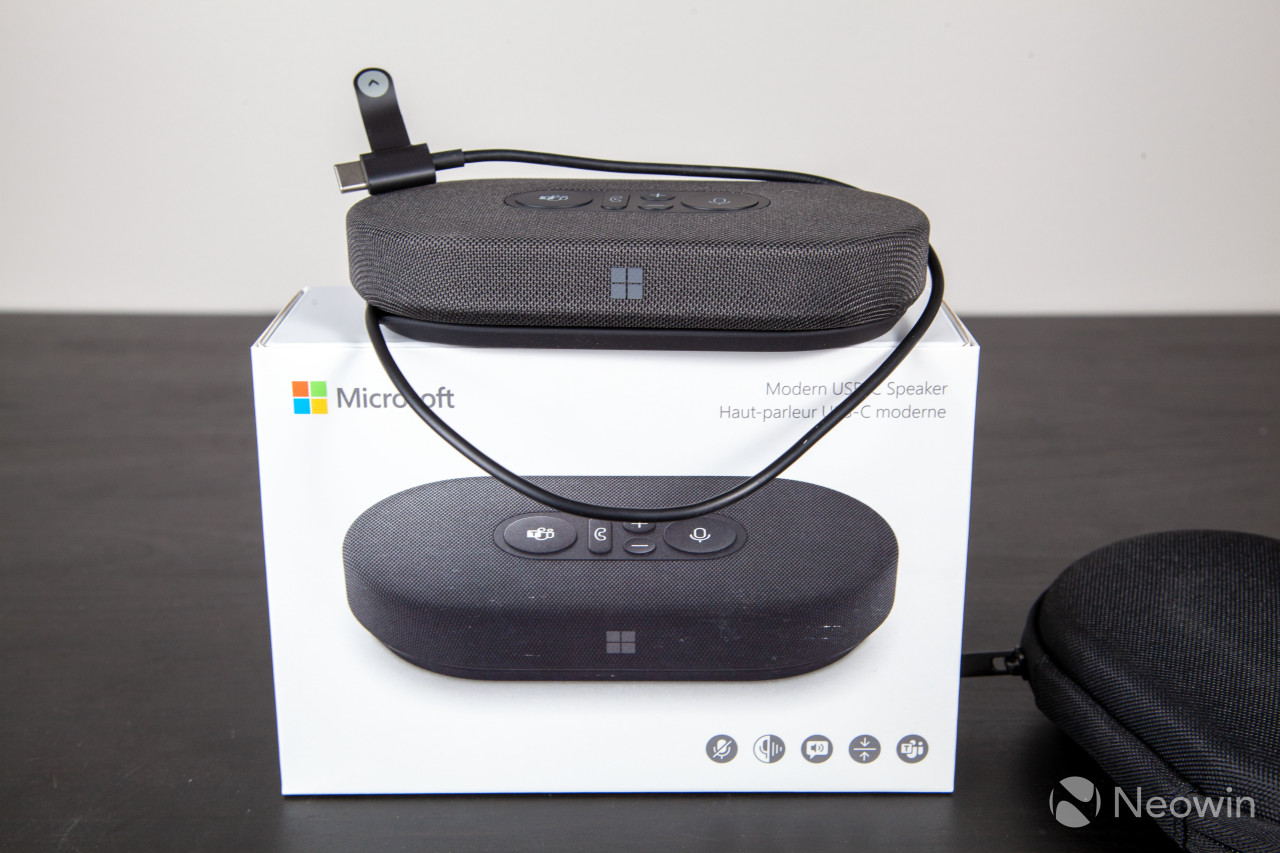 The cable management on the speaker is also top notch. The bottom of the speaker is made of rubber and has a small gap where the USB-C cable cleverly hides, allowing you to make the cable as long (up to 26 inches / 66 cm) or short as you want.

The microphone on the speaker definitely doesn't sound as good as a set of headphones, but according to my coworkers, it wasn't far off. They were also able to hear me very well regardless of whether I was a foot away or several feet away from the device, making placement very easy. It was the first time during the pandemic that I was able to be on conference calls without having to put headphones on, and because of that, it was my favorite device of the four.

In a pinch, you can use the Modern USB-C Speaker to play music as well. It's not the best for this use case, but it's better than integrated laptop speakers.

The only downside to the speaker is the price. Coming in at $99.99, it is fair for the market, but twice the price of the Modern USB Headset which had slightly better voice quality. If you have multiple people that need to speak and listen, or if you don't like wearing headphones in meetings, this is a great solution.

My daily use laptop is a Dell Precision 5520 and while I love the form factor and the tiny bezel, the downside is that the webcam is built into the lower-left hand corner of the screen, presenting a rather unflattering view of the user. Even worse, if you try typing on the keyboard while using the webcam, all people on the other side see is a flurry of knuckles bouncing up and down in front of the camera. 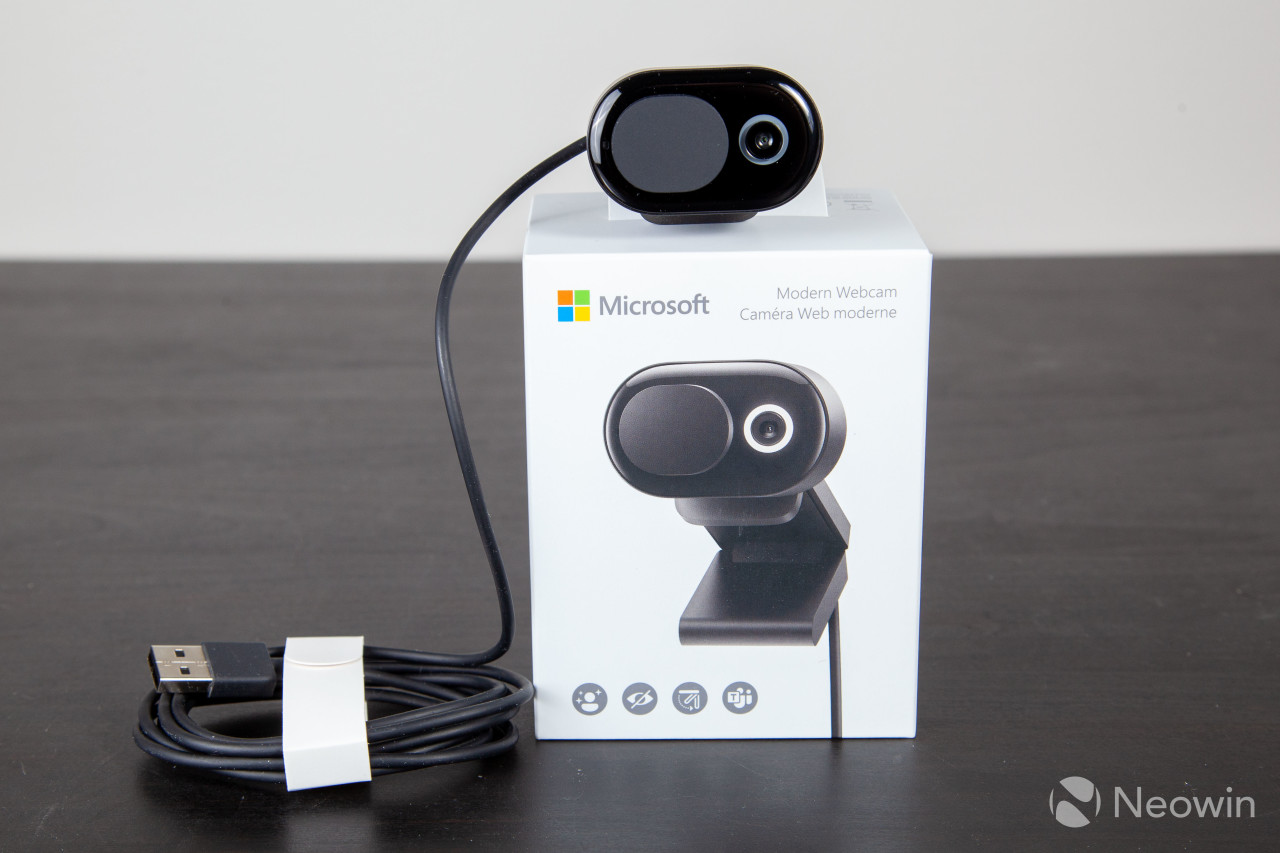 The Microsoft Modern Webcam aims to solve that problem for people like me. Boasting a 1080p resolution, a single microphone, and a privacy shield, the device connects to your machine with USB-A and attaches to the monitor by means of a hinge . There's a tiny bit of overlap on the screen itself, but it isn't distracting at all.

In the first meeting I had with the camera on, a coworker asked me if I moved to a different room. When I told her it was simply a new camera, she was impressed and said that everything looked extremely clear, so much so that she could easily see the posters in the back of my office. I also noticed that the built-in HDR greatly improved the picture quality; even when I left the lights in my office off, my face was illuminated well, while the rest of the room was very dim. 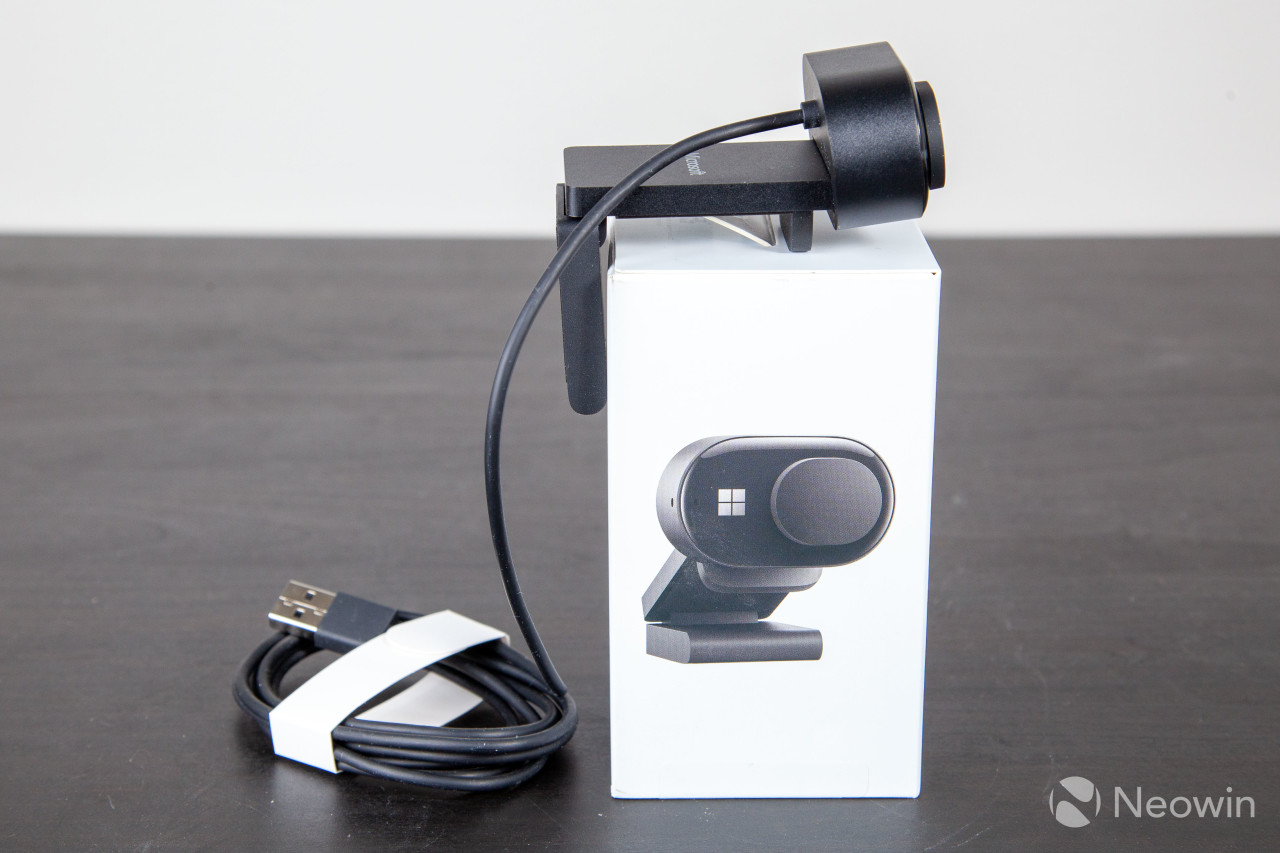 The Modern Webcam also has a built-in microphone, but for some reason it's not part of the Microsoft Teams certification. When you attempt to activate it, you're given a warning that you have to accept, and then the camera has to reboot for it to take effect.

Overall, the quality of the microphone is acceptable, but nowhere near as good as the Modern USB-C speaker or either of the two headsets that I reviewed. It'll get you by if you're tight on funds, and is better than the laptop's built-in mic, but your coworkers will be happier if you use another solution, which is probably why Microsoft disables it by default. 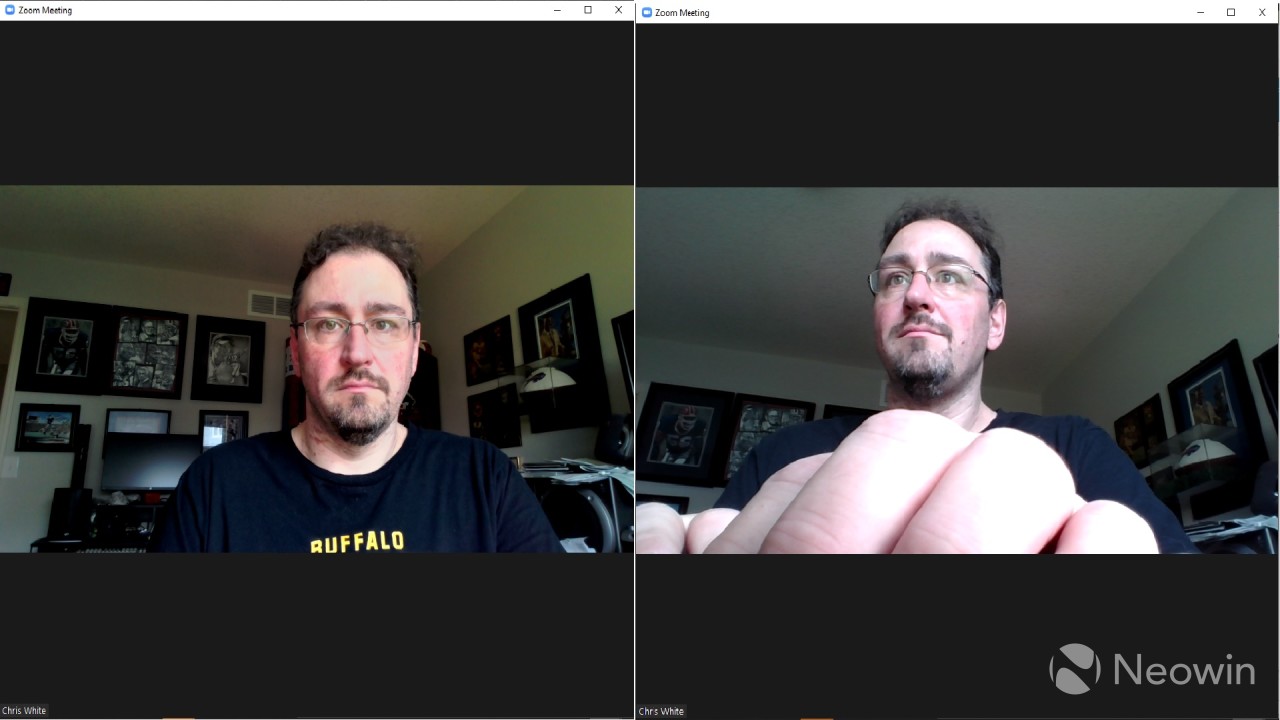 The Modern Webcam retails for $69.99, which is slightly under what the Logitech c920, a device that seems to be its main competitor, costs. The image quality is great, it's small and unobtrusive, and it worked by simply plugging it into a USB-A port. If you need a webcam for your meetings, the Microsoft Modern Webcam is a winner.

Along with the new Modern line of devices comes an app to manage them all: The Microsoft Accessory Center. This tool installs itself automatically after plugging in your first device and, since I ignored it at first, I had trouble finding it. 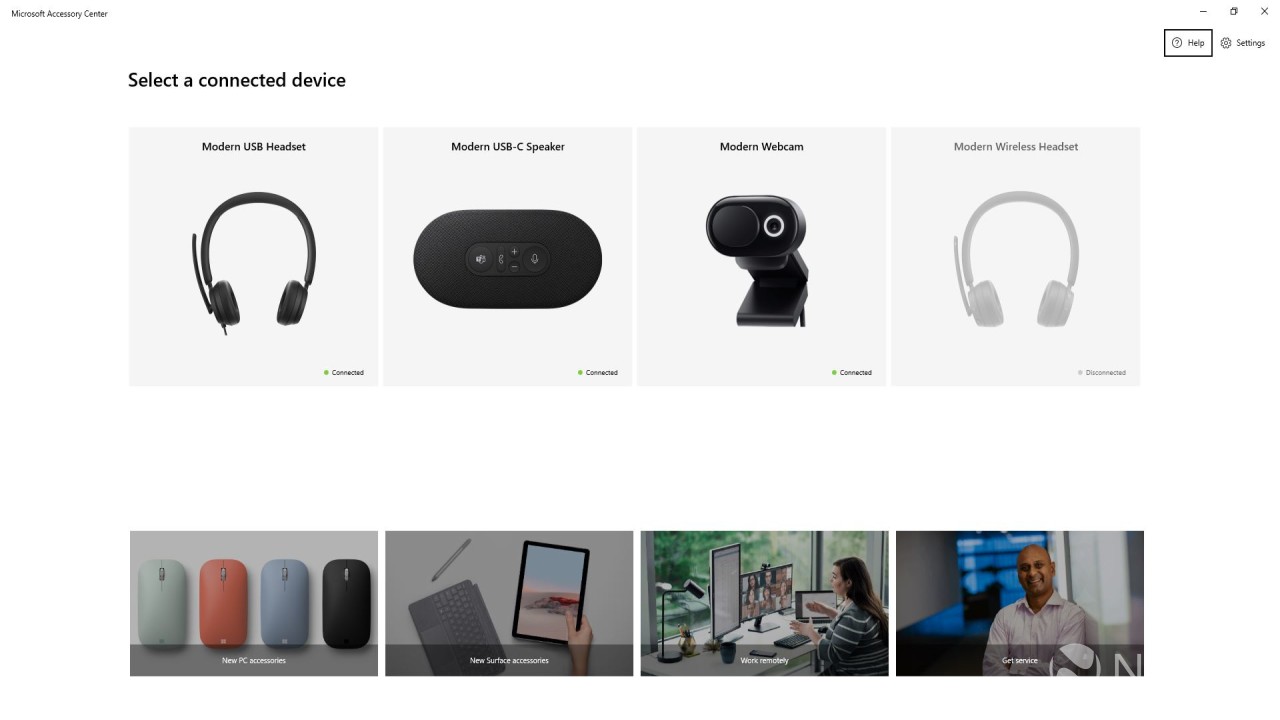 There's really not much to the application. It shows all of the devices that have ever been configured on your machine, as well as highlights which ones are currently connected. From there, you can click on one to make some minor modifications to each device. For the headsets and the speaker, you can control the maximum volume level, and whether you can hold the mute button to temporarily unmute and talk. For the wireless headset, you're also shown how many hours of battery life are remaining. The camera lets you adjust things like brithness and contrast, and also allows you to disable HDR, but I found leaving all of the settings at default worked fine. 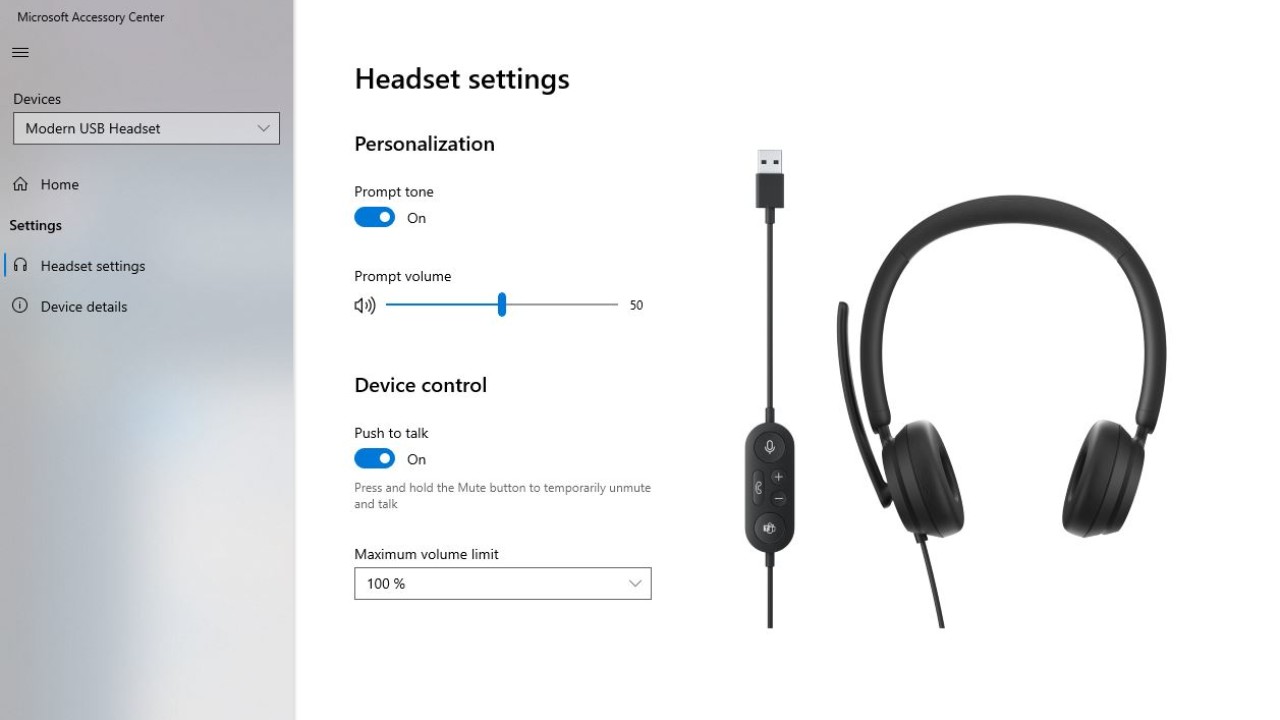 This is a tool you'll probably look at once or twice in the beginning and then never use again.

I went into this review thinking the products would be relatively unexciting, but after using them for a week, I was pleasantly surprised at how well they all worked, even without being a heavy Teams user. 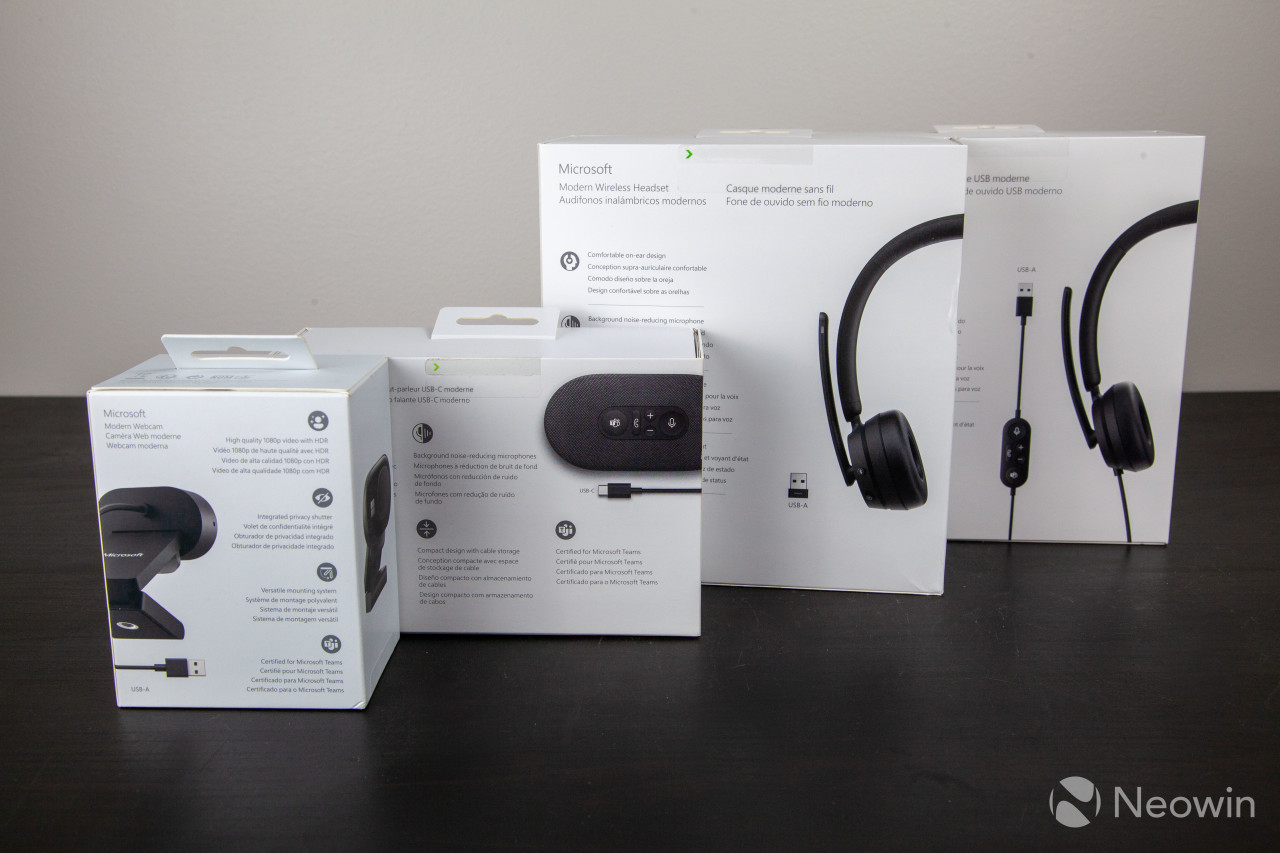 Unless you absolutely dislike having a wired headset, I'd recommend saving $50 and buying the wired version. The sound quality is a little better, you don't have to worry about battery life, and the buttons are easier to access. Plus, it's handy to be able to look down at the mute button to see if you're muted, something you obviously can't do with the wireless headset.

As for the other accessories, the Modern Webcam has great picture quality and the built-in microphone, although not Teams certified, is still good (but not great), and is definitely better than any built-in laptop webcam I've seen. The Modern USB-C Speaker also has great audio quality, although slightly less than the USB Wired headset, and works wonderfully for conference calls with multiple people.

The only downsides, if you can even call them that, are that the Teams button takes up a lot of space and is of limited use, even when using Teams, and the wireless headset required the dongle to work well for me.

The new lineup by Microsoft hits the ball out of the park and would be a welcome addition to any business user, whether working from home or in the office.