Isometric graphics in games have been a staple of the gaming industry for many years, with titles like Diablo and Arcanum: Of Steamworks and Magick Obscura making up the biggest part of my personal experience over the years. Desperados have made this even more immersive with so-called ‘view cones’ and enemies that respond to their surroundings in specific ways.

Shadow Tactics: Blades of the Shogun originally launched on PC in 2016 to high praise, and it’s mostly deserved. It takes most of what you would expect from a title in this genre and switches it up so to speak. Instead of the fixed camera angle, you get full control over your perspective. This gives you several angles to which you can approach the mission at hand, which is a step up from previous games that uses the same gameplay and graphical style. It received a lot of comparisons to games like Desperados and Commandos, but I feel that these do the game little justice.

Now don’t get me wrong, I loved playing Desperados back in the day. But Shadow Tactics is in a league of its own. When I started playing it I felt like I might not end up liking the game, even with its faults, I thoroughly enjoyed myself in the end. 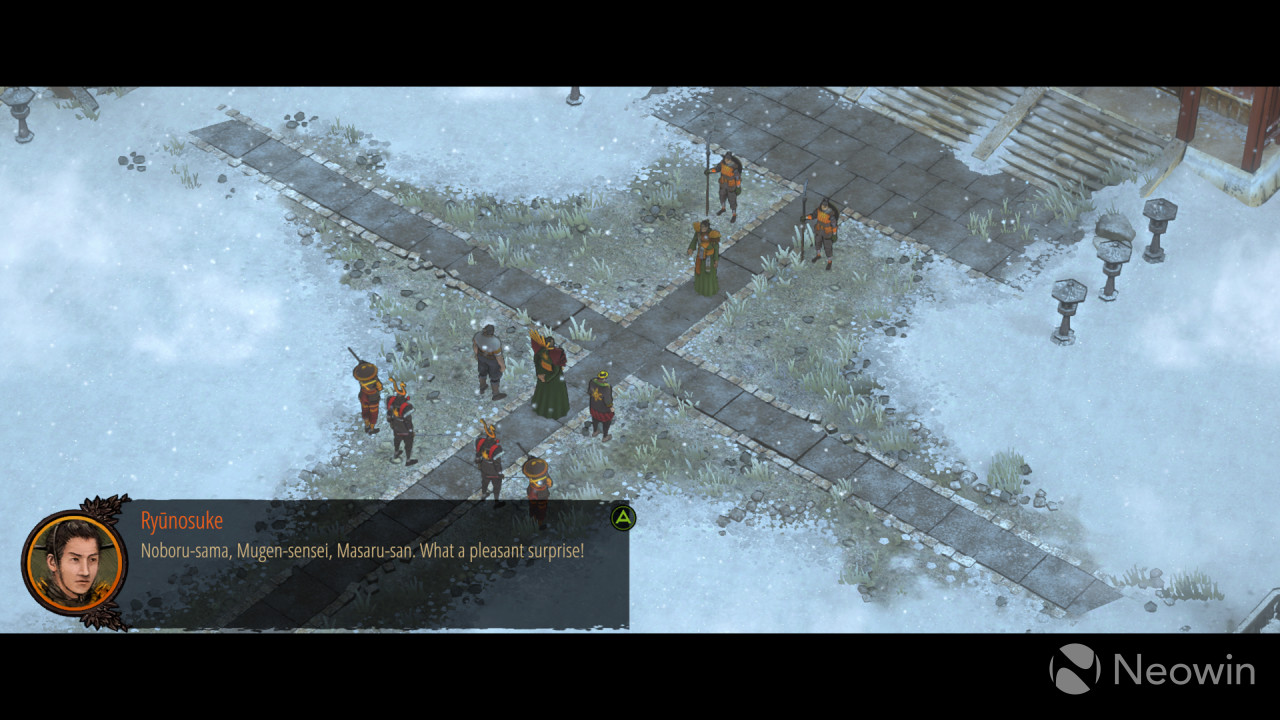 The game is set in the late Edo period, although it does not tie into any of the actual history of that era; instead opting to build a fictional story within that framework. The narrative follows several characters, starting off with a shinobi called Hayato, a hired assassin who was sent out by the Shogun to investigate a local warlord that is plotting to destabilize Japan. The assassin encounters Mugen during this mission, after the castle of the warlord is attacked. Mugen, a charismatic Samurai, introduces the assassin to several other characters as part of a group of hired mercenaries.

Each character comes with their own set of skills and abilities. Hayato has the ability to kill enemies at range with a ninja star. Mugen can take down several enemies with the ‘sword wind attack’, and is the only character that can take on a Samurai and survive. Other characters include Yuki, the stealthy youngster that can set traps and lure enemies with a bird call; Aiko, a master of disguise that can take on the identity of any woman in the area; and Takuma, a witty old man who has the ability to take out enemies at range using one of the arcane weapons of the time. They work together to locate the warlord Kage-sama, and during this goal, kill all his allies. 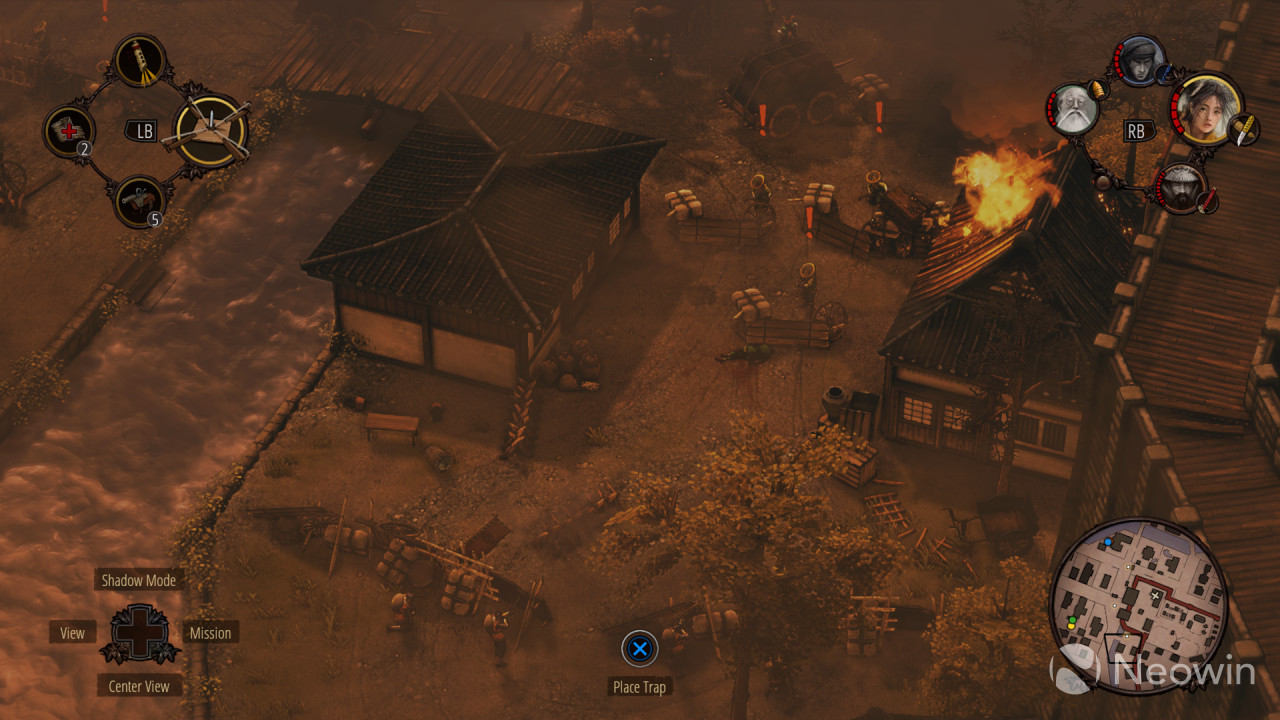 The story, however, was the worst part of the overall experience for me. All the characters in the game had a sort of one-dimensional quality to them, where you’d wish you could get more information on what made them tick. Mugen was the most diverse of the bunch, but even then it felt extremely synthetic. Yuki was the most annoying, as she constantly tried to gain the approval of Hayato, a stranger she just met during one of the missions. Moreover, her being an under aged girl did not help much. On top of this, the characters all sounded, for the most part, like they played in Downton Abbey with their pretentious English accents for the most part.

The game does have several dramatic twists after what was a pretty slow start in my opinion. Closer to the end of the campaign, Mugen and his team are captured after the Shogun requests him to assassinate Kage-sama. This came after the murder of General Yabu - perpetrated by your team - that plunged the country into war. During this mission, you uncover the truth about who the mastermind was of the plan to overthrow the Shogun. This is mostly where the Samurai proves his honor and gives you a truly in depth look as to who his character really is and what he stands for; after he decides on a dramatic end after he is forced to betray the Shogun, when Kage-sama threatens to kill his team, in exchange for information relating to the son of the leader. When the campaign concludes, the remaining acquaintances break up and set off on their separate ways. 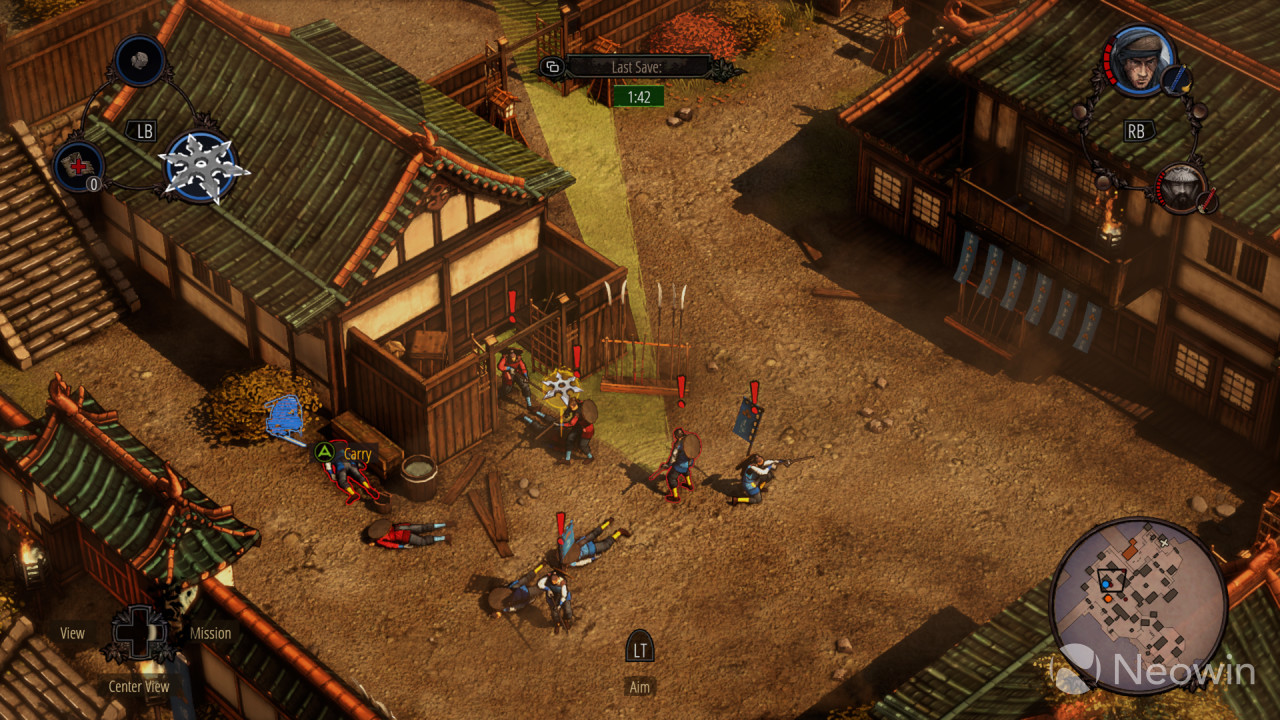 Even with these twists and heart-wrenching moments, it still lacked the depth this game deserved. If the writers aimed for a more cinematic approach to the campaign, I could have seen myself feeling more connected to the characters, instead of the in-game dialog boxes with expressionless faces staring back at me. I might be in the minority here, but it just felt dead to me. It's was hard enough to care about the characters in a game like The Witcher 3: Wild Hunt, and I played that game for several hundred hours.

Gameplay was where Shadow Tactics really excelled. As previously mentioned, it takes a lot from games within the same genre but adds extremely well- designed and detailed three-dimensional worlds. Enemies also dynamically adapt to the changing environment. In the past, an NPC or enemy would walk over dead bodies or blood and not notice a thing. I remember during a mission where you had to infiltrate the mansion of one of Kage-sama’s accomplices; you had to get into a delivery wagon to get past several guard posts as other options were quite dangerous. At one checkpoint, I killed one of the guards after getting out; however, surprisingly, once the next cart came along, the guard working with him noticed that he was missing and went to look for him, nearly setting off the alarm. Little details like this add to the overall immersion and it stuck with me as one of the better moments of the game.

Beyond that, the game requires you to spend a considerable amount of time deciding on the most effective route to take during a mission, however, some annoyances do creep up. When your character is spotted by a guard, for instance, the game suddenly goes into 'slow motion mode' and your options to evade or protect yourself in that specific scenario are drastically reduced. This has caused me several headaches during gameplay, that bordered on frustration. Luckily the game has a quick-save option and prompts you to do so every so often. If you were to evade capture or death, the game becomes more difficult, with the map being flooded with more guards that patrol the area you were last spotted in. This gives the player the incentive to take the more stealthy approach, something I am quite bad at achieving most of the time. 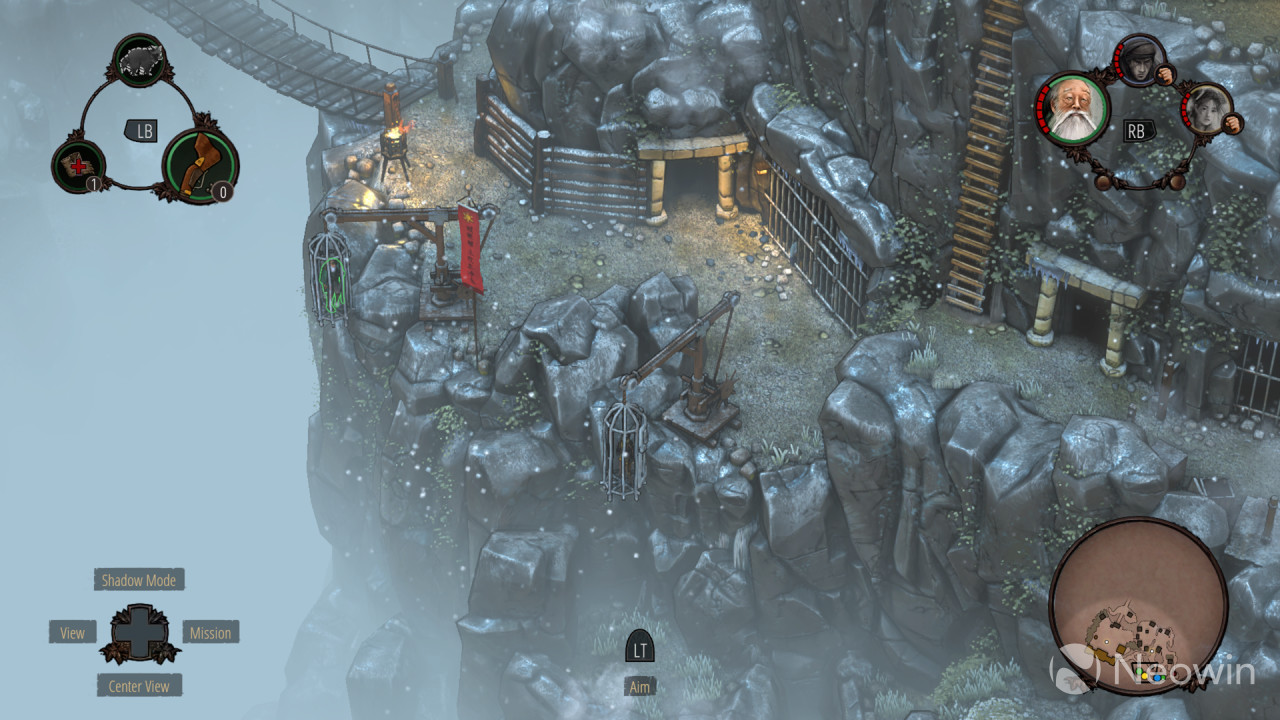 Playing the game - which had previously been optimised for mouse and keyboards for the most part - on Xbox One was a generally good experience. The controller was well mapped for the game, with it mostly using the bumpers and triggers to switch between characters and their specific weapons. The title also allows you to take control of multiple characters with the ‘Shadow Mode’, which helps you to assign orders so that you can execute them in unison. This was especially useful where you needed to take down multiple enemies at once, and something you will definitely use.

The game also offers players on the console the ability to adjust the V-Sync rate between 30FPS, 60FPS and unlocked. However, I played with it set to 30FPS since you could notice visible screen-tearing at higher levels, which was extremely annoying. The option is nice, for when a higher powered console arrives, but for the Xbox One S I used, it generally lacked usefulness at this point. I played the game on a 4K HDR ready TV set, and sitting both at a distance and close to the set didn't result in the game becoming 'blurry' or the colors and detail losing any of its punch.

Shadow Tactics: Blades of the Shogun does not set a new standard for the genre, but it improves on the experience enough to warrant the praise that it received. It also fixed the general lack of gameplay depth you usually get with these types of games, by opting for a more forgettable story instead; for the most part, I do not mind this trade-off. It would have been nice to have something to take away from the game, perhaps some historical connection that gives you the incentive to want to learn about the culture or the period.

However, revisiting these types of gameplay experiences, when it's done this well, gives me ample reason to want to go back and play it again, even if I don't care much for the narrative.

Shadow Tactics: Blades of the Shogun is available for the Xbox One and PlayStation 4 right now.

The reviewer was provided an Xbox One copy of the game by the publisher.