You may remember last week that Siri revealed its secret love of the Nokia Lumia 900 4G on AT&T, after it responded that the flagship Nokia Windows Phone is the "best smart phone ever". Apple was obviously furious that the voice assistant told people that a rival smartphone was the best, so it rushed to stop Siri from sharing its love to the entire world; now it simply says "wait... there are other phones?".

Of course Apple couldn't completely stop Siri from brandishing around its secret crush on the Nokia device, you just have to ask it the right questions to avoid the Apple's Reality Distortion Field. According to WMPowerUser, asking Siri what the best phone is according to customer satisfaction skips around the Distortion Field and yet again reports that the Nokia Lumia 900 is the best smartphone of all. 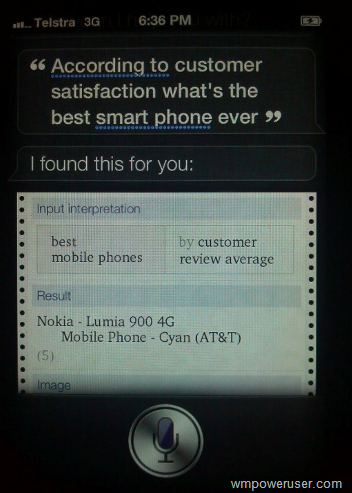 Apple could attempt to change the Wolfram|Alpha interpretation method to avoid Siri reporting that the Lumia 900 has the highest customer review average, but for now they must be content in Siri revealing that the iPhone 4S actually isn't the highest rated phone going around. And kudos must go to Nokia for delivering a device that is actually dominating the user satisfaction ratings.