Sky HD has become the forefront of HD broadcasting in the UK, it launched back in 2006 just in time for a summer of football (soccer!)  to be broadcast. When I first covered Sky HD it had only 10 HD channels, they have now grown to over 70 in total and are finally packed with some great looking TV, something that was missing back when it first launched.

Many other things have changed with Sky HD since the 2006 launch, the Sky+ HD Guide had a much needed make over in late 2009 with the channel listings finally getting cached onto the hard drive rather than streamed down the tuner. This also meant that a small Mini TV view could be added into the top right of the guide while browsing channels.

In 2012 Sky improved their EPG once more, fully integrating their On-Demand services across the planner, increasing the amount of channels that can be viewed in the guide in one go and allowing programmes to be viewed by Genre. The most recent improvements from Sky came just a month or so ago with a massively improved search feature that makes use of not only increased speed, but also allows you to search by actor, TV shows, films and more and includes on-demand content too.

The good news is that not only has the software and broadcasting levels of Sky HD been improving, so have their satellite boxes. Today we are covering their latest top-end Sky+ HD box - the Sky+ HD 2TB box with built in Wi-Fi.

Yes this is a beast of a box for those of you who like to record TV shows both directly from the Sky service and via on-demand. Despite the box being 2TB in size, you actually have around 1.5TB of space to use as the other 500GB are used to on-demand and various other bits of software and caching, still it is a huge amount of recording space to make use of.

Sky tell us that you can record around 350 hours of HD/3D content on this box, while plain SD content could add up to around 1180 hours. This isn't an exaggeration both as we have been recording film after film in HD and still have 90% of space remaining. Comparing this to our old 500GB box that had less than 20% of space nearly all the time we use it and it is a godsend, especially with children in the house making use of On-Demand kids programming.

The built in Wi-Fi is an excellent performer too most of the time. Setup is easy on the new Sky boxes as you can just press a button on the front of the box to bring up the connection menu and get connected within a minute or so. The box supports both the 5GHz and 2.4GHz frequency band too which is great news for those with modern routers.

Download speeds vary all the time, not just depending on your service provider but also depending on which on-demand service you are making use of. Most of the time we have been using BBC iPlayer and HD shows tend to take a few minutes to download at a time, though within a few seconds you can start to watch the programme you are downloading before the download has finished.

Another update that many Sky HD users may have missed is that Dolby Digital 5.1 via HDMI is now supported on recent boxes, this means there is finally no need for an extra optical cable hanging around behind your TV. This feature came as a firmware update a few months ago for many boxes released in the past few years so it is well worth checking to see if it supported on yours. 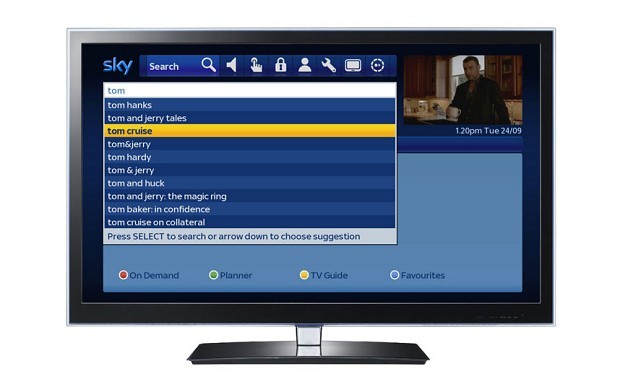 Finally the Sky+ HD 2TB box is also slightly slimmer than the older 500GB ones, it's not a massive difference but you can clearly see it, though depth-wise it is now 10mm bigger. The 2TB box also has a darker design to it too, it fits in better with the other devices under our TV now too.

Pricewise the Sky+ HD 2TB costs customers £149 if you have the Sky Entertainment Extra+ Pack which costs £32 a month which isn't bad for a box that will last you some time and the company have enough options for people who either don't want to pay out or who won't fill their boxes up as much as we do.

Overall I can't really fault the box or service, it does exactly what you want it to do and really can be packed full of content. I'd like to see some of the On-Demand internet downloads a bit faster for those of us on very high speed connections, but it isn't really an issue most of the time. I'm personally very pleased that Sky have integrated Wi-Fi in this time round too, making it even easier to connect your box up.

In the end, if you record loads of TV in high definition then this is the Sky box for you.