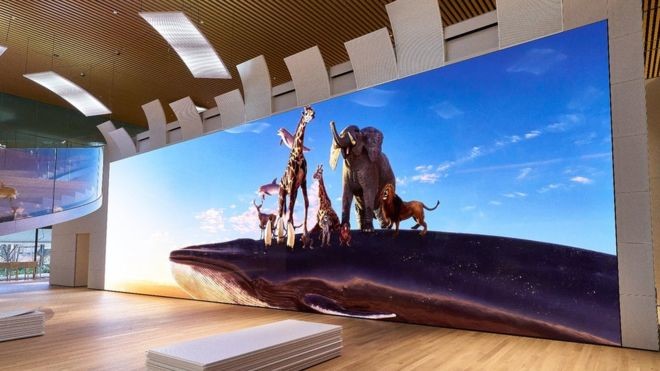 As prices of 4K TVs and displays become more affordable, they are finding their way into more and more households, becoming the new norm. As we move into the next phase, 8K displays and TVs are being heavily touted at trade shows, and surprisingly, you can now even purchase an 8K TV if you have the funds to do so. So, you have to ask yourself, when is the resolution going to jump to 16K?

While it will most likely take quite some time for the technology to filter down to consumers, we have seen 16K displays being shown off in commercial and prototype settings over the past year. During the NAB (National Association of Broadcasters) 2019 trade show, Sony took to the Las Vegas stage to announce its latest 16K resolution display, which is 17 feet tall and 63 feet wide. The display is currently being installed at the Shiseido Research Center in Yokohama, Japan.

Although the resolution and sheer size of Sony's latest 16K offering are quite impressive, it isn't one single display. Instead, the company relies on its Crystal LED technology to build such a massive size. The technology allows Sony to use multiple panels together seamlessly as if they were one because the panels themselves do not have visible borders. The panels offer high brightness output up to 1000 cd/m2, can support a maximum refresh rate of 120 fps, and it looks quite clear no matter what angle it is being viewed.

While the display technology itself is quite rare, so is the content. Because of this, Sony had to produce a special film for Shiseido, so that it can show off the display in its research center. While we won't be seeing this in homes anytime soon, it's good to know that future TVs could offer modular panels, making it easy to upgrade to a bigger size, without having to abandon your current setup.