Space Bat, the second most famous bat in the world, fate will forever remain a mystery. Space Bat decided to take a siesta on the side of the external fuel tank for the launch on March 15th. A picture of the bat, below, clearly shows the bat attached to the tank during liftoff.

NASA found the bat while doing a routine check to observe foam that falls off the tank to see if a potential impact could harm the space shuttle. "NASA says its fate will always be a mystery, because the umbilical camera that takes pictures of the external tank after separation was broken."

Space Bat can been seen still attached to the external fuel tank as the shuttle cleared the tower. It won't ever be known what happened to Space Bat but clearly the little creature fulfilled a dream by taking the species to a new level, a bat has never been into space before. 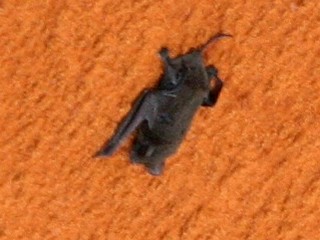