Qualcomm announced its next flagship-class chipset last week, promising a 10nm FinFET process and a release timeframe of the first half of 2017. Other than that, there simply isn't much that we know about the Snapdragon 835, other than that its model number is MSM8998.

The alleged specs of the SoC (system on a chip) have leaked on Chinese website Anzhuo, along with the currently unannounced Snapdragon 660. 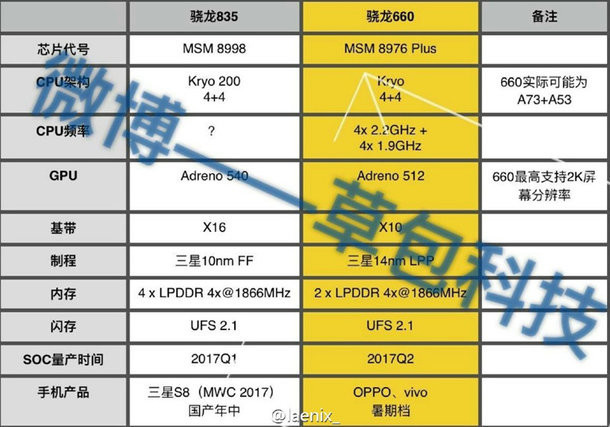 To be clear, you should take this with a grain of salt for now. Qualcomm does like to announce its new products in stages, but some of this spec sheet doesn't really seem to add up.

Starting with the Snapdragon 835, much of what you see we already knew - such as the 10nm FinFet process - or was rumored. We suspected an octa-core Kryo 200 CPU and an X16 modem - which was announced back in February - and should offer 1Gbps download speeds (LTE Cat 16) and 150Mbps upload speeds (LTE Cat 13).

But the Snapdragon 660 specifications are where there really is cause for skepticism. Beginning with the model number of MSM8976 Plus, it's worth noting that the Snapdragon 652 is MSM8976 and the 653 is MSM8976 Pro, so it doesn't seem likely for the company to develop a Plus model that's ahead of the Pro model.

The octa-core Kryo CPU that's clocked at 2.2GHz and 1.9GHz seems strange as well. Qualcomm's current flagship SoCs are the Snapdragon 820 and 821, both of which are quad-core. The 820 has two Kryo cores clocked at 2.15GHz and two clocked at 1.59GHz, so the mid-range Snapdragon 660 would outperform it, although in fairness, the specs show it to have a lower quality GPU with an Adreno 512.

Still, we're going to find out soon, at least with the Snapdragon 835. According to that document, we should see it in the Samsung Galaxy S8 at Mobile World Congress 2017, so Qualcomm should announce all of the details well before then.