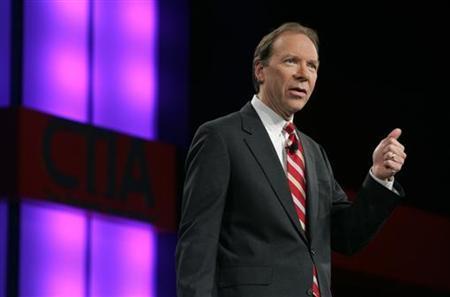 Dan Hesse, CEO of Sprint has said that the company plans to voice their concerns over the proposed takeover of T-mobile USA by AT&T. The primary concern by Sprint is that the deal will hurt the wireless industry and that if an acquisition happened AT&T and Verizon Wireless would hold ‘tremendous’ power as between them, they would hold 79 percent of the U.S wireless market. He feared the takeover would stifle innovation with less competitors being in the market.

The deal which is worth $39 billion, has stirred a lot of controversy with hope by many that the government intervenes and discloses the deal. Yesterday Sprint shares fell 14 percent because of the announcement which would have come as a shock as Sprint was also in negotiation talks with T-mobile USA with the intention of buying.

Yesterday the U.S. House Judiciary Committee said it would hold a meeting to discuss the takeover and look at ‘possible anti-competitive impacts’.

In response to Hesse’s concerns, AT&T senior executive vice president Jim Cicconi via an emailed statement in which he said “We understand Sprint has concerns, and we’ll be happy to address any they present, whether at the Justice Department, the FCC or the Congress,” later followed by “We feel we have good and compelling answers. And we feel policymakers will readily understand that any company with whom AT&T competes may not be especially positive about anything which makes AT&T a better competitor in the wireless market.”

At the wireless industry conference in which he made the comments, he told his audience that it would give AT&T too much power in the mobile market however he refused to answer questions when asked about whether Sprint had held talks with T-mobile.