In February, research firm Strategy Analytics said that Windows Phone had finally surpassed BlackBerry to become the third biggest mobile OS, behind Android and iOS. Today, that same firm issued a new global smartphone report for the second quarter of 2013, and it was a mixed bag for Windows Phone. 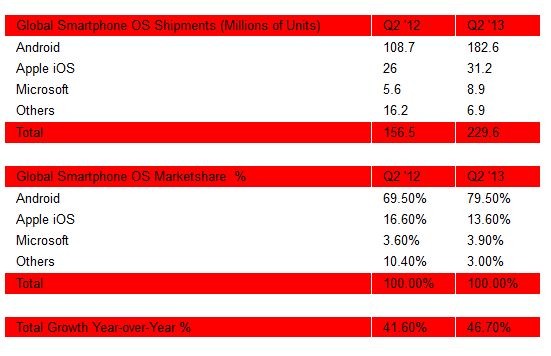 One of the firm's analysts, Linda Sui, said that while Microsoft has made some gains in the smartphone market, she believes the company need to do two things to become even more competitive against Google and Apple: Sui stated:

First, the license fee charged to smartphone makers for WP8 must be more competitive to compete with Android in lower price-bands. And second, Microsoft must dramatically accelerate its support for advanced technologies, such as octo-core chipsets, because WP8 continues to lag behind Android in the premium smartphone category.

The really bad news is reserved for BlackBerry. Despite launching their new BlackBerry 10 smartphones earlier this year, Strategy Analytics doesn't even show BlackBerry devices on their list anymore and doesn't mention them in their press release. We assume that Blackberry's market share is included in the "Others" category. Their numbers are now below that of third place Microsoft.