Just over a year ago, Valve co-founder Gabe Newell made headlines when he said that Windows 8 was  "a catastrophe for everyone in the PC space". Today, the hardware survey numbers for Valve's Steam service confirmed that the 64-bit version of Windows 8 is now firmly in the second position as the most used OS on Steam. 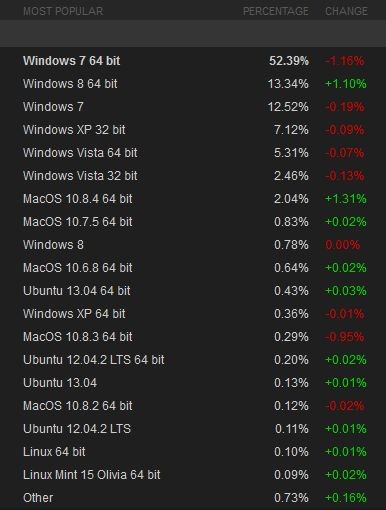 In late July, Newell said that the launch of Windows 8 would cause many major PC OEMs to "exit the market". Valve has been trying to expand Steam's library of games to include more Linux titles, but the latest Steam hardware numbers show that Linux users are still a tiny fraction of its total audience. By contrast, Windows 8 has seen much better acceptance by Steam users in comparison to the overall PC market.

Earlier this year, Valve said it was developing its own console-like hardware product, popularly known by its unofficial name the Steam Box, which Newell said would run on Linux. Newell also continued to slam Windows 8 at the same time, saying it was "like this giant sadness." Apparently, a growing number of Steam users think the "giant sadness" of Windows 8 works pretty good for them.