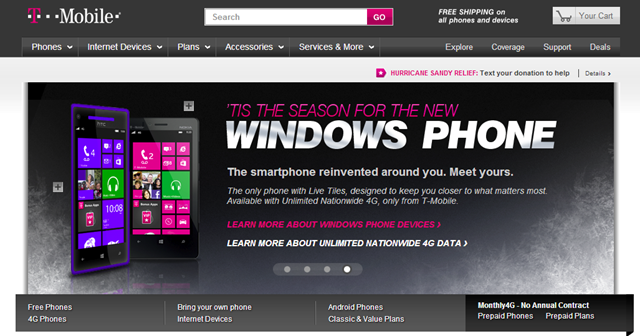 T-Mobile's website shows that the Nokia Lumia 810, which is an exclusive for T-Mobile in the US, is now available in black for $149.99. The 4.3 inch screen has a 1.5 GHz dual core Snapdragon processor from Qualcomm inside, along with 1 GB of RAM and 8 GB of internal storage.

T-Mobile is also now selling the 16 GB version of the HTC Windows Phone 8X, with the California Blue color, for $199.99. T. The prices for both devices are after signing a two year contract and after a $50 mail in rebate. T-Mobile previously had an exclusive on the Windows Phone 7.5-based Nokia Lumia 710, which the company still has on sale for free with a two year contract.

This means that Verizon, AT&T and T-Mobile are all offering new Windows Phone 8 devices to people in the US. As we reportedly earlier this week, the nation's third biggest wireless carrier, Sprint, has now indicated it will join the party sometime in 2013.