As you may well have read earlier, Microsoft TechEd 2012 – now in its twentieth year – kicked off today in Orlando with a keynote address delivered by Satya Nadella, president of Microsoft’s Server and Tools Business. Although there were a few technical issues, it was clear from the address that Microsoft’s vision of a unified ‘cloud OS’ is now coming together.

There’ll be a fuller in-pictures guide to what’s happening at this year’s TechEd a bit later, but for now, let’s take a look through the day 1 keynote session, in pictures.


The build-up: a groovy (do people still use that word?) music extravaganza greeted the gathering crowds as they filed into the conference hall… 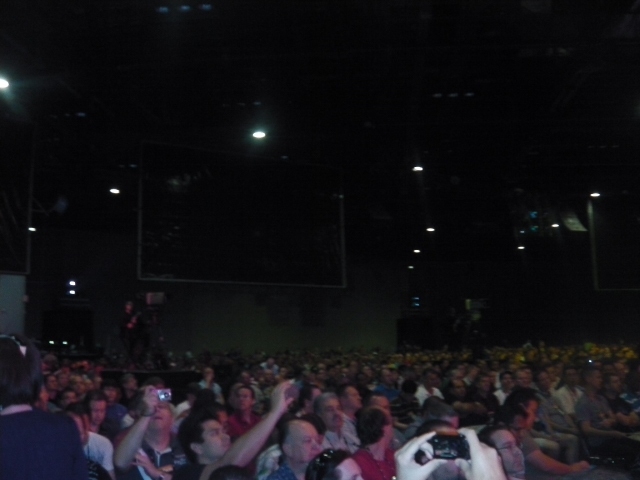 …along with plenty of funky (do people still use that word?) lighting. Tunes were provided via this awesome translucent mix-desk... 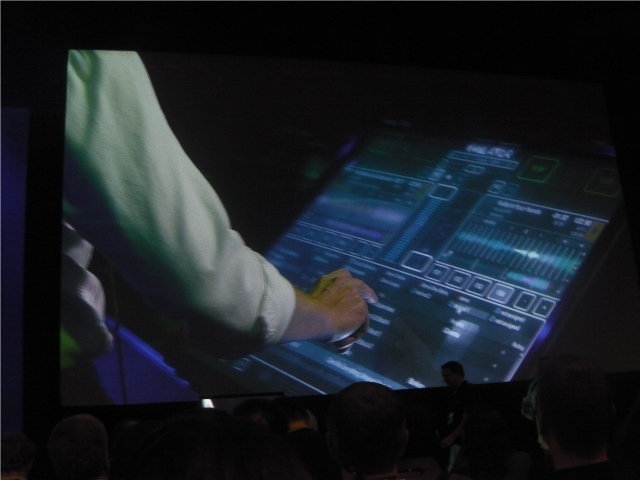 ...courtesy of this nice man, whose name I do not know: 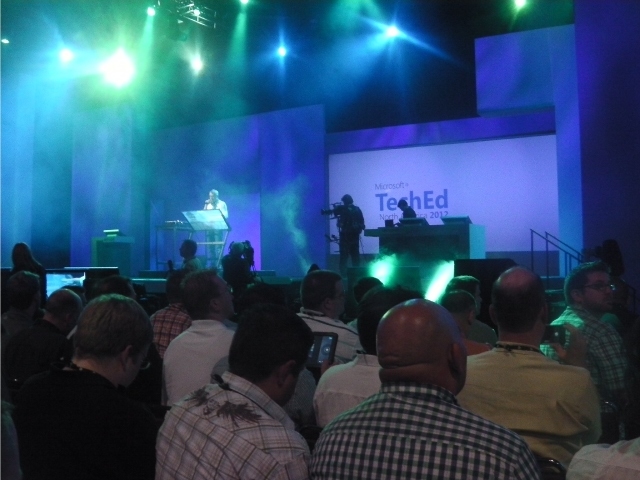 Satya Nadella kicked off the show by reminiscing through twenty years of TechEd; at the first show in 1993, he helped with stuffing the ever-popular swag-bags (into which free gear and other plundered booty can be easily chucked) with the leaflets, ads, guides and other bits and bobs that attendees find in it upon registration. 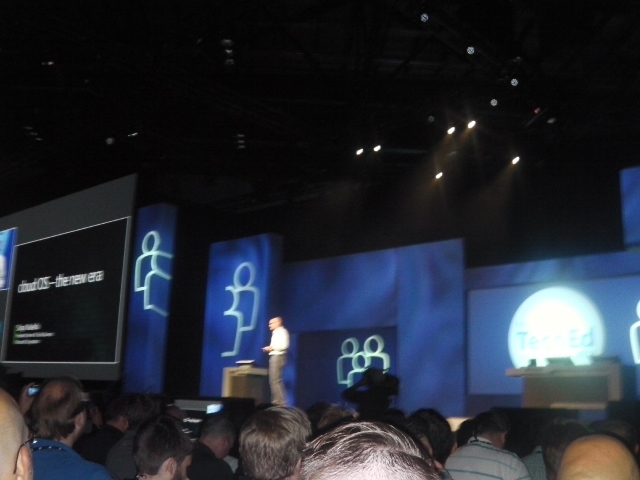 “We’re now at the beginning of a new era”, Satya told the crowd. “This is an opportunity to reinvent ourselves… to drive even more value.” 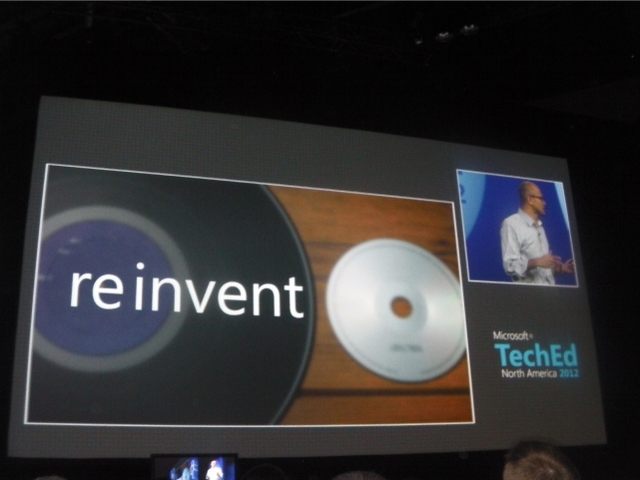 This is the era of the ‘cloud OS’, and Microsoft believes that with its suite of complementary, integrated products, it’s best placed to establish itself as a leader in the cloud. 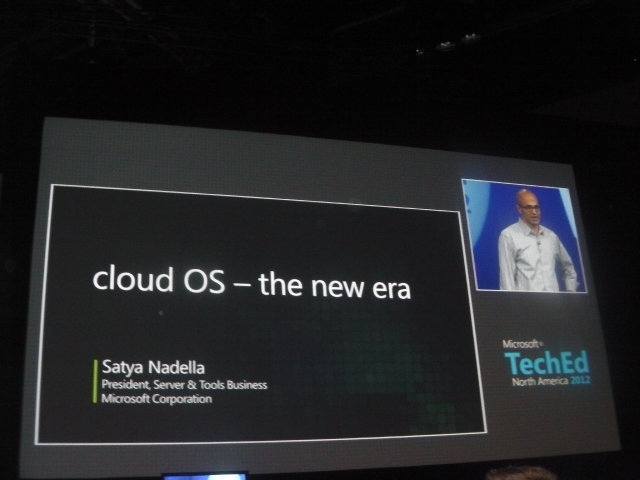 Satya spoke about converged systems, and rationalisations in both software and hardware that can drive innovation and improve performance and efficiency. Hardware matters of course, but “the key to the cloud network is software control”. 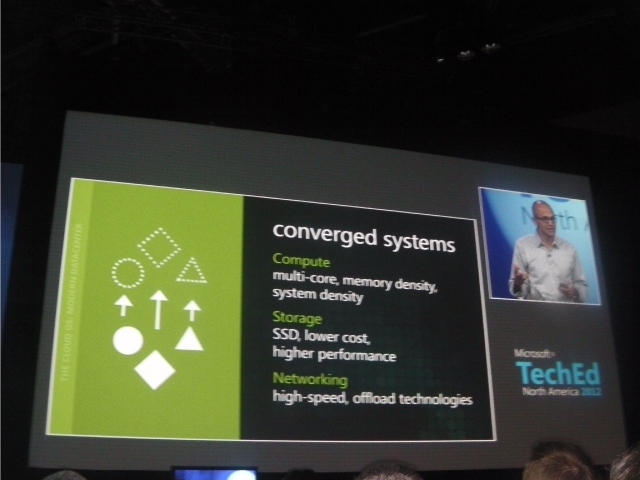 He also spoke about ‘services at internet scale’, discussing Microsoft’s vast suite of consumer and enterprise products and how they leverage the efficiencies in development and performance that can result from a well-built cloud infrastructure. 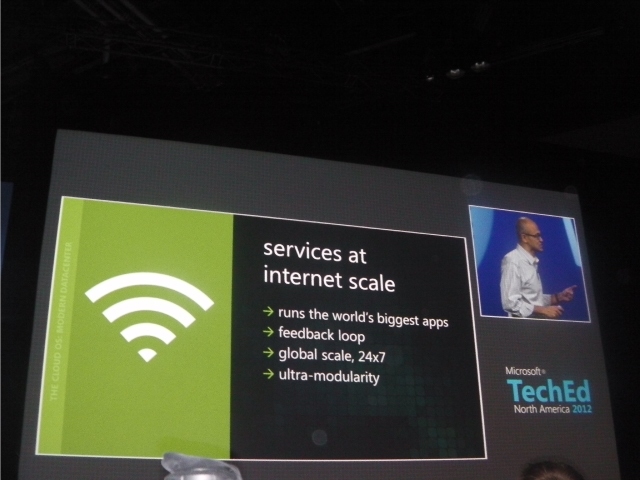 Key to this effort is Windows Server 2012. Its scalability and resilience are an integral part of its proposition, while Microsoft believes that its first-class System Center tools provide a superlative administration and management infrastructure that adds even more value to the offering. Satya revealed that Bing is already running the Windows Server 2012 Release Candidate. 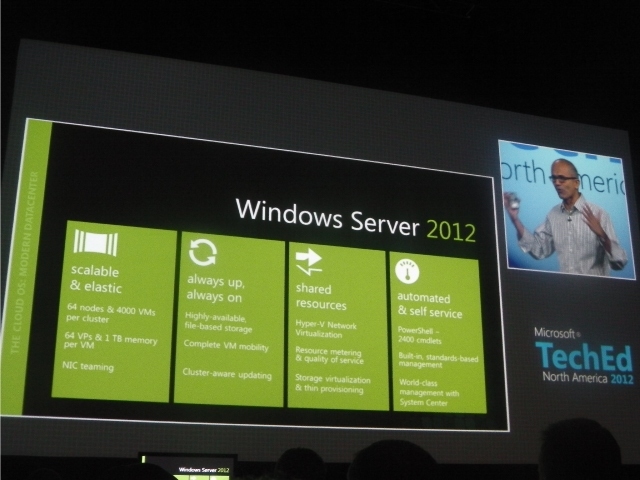 Microsoft’s Jeff Woolsey next took to the stage to talk about Windows Server 2012. The product, he says, is all about “creating the best cloud OS”; “we want to redefine performance and scale”. Using the server shown in the slide below, Jeff walked us through a quick demo, in which he copied a 10GB file in less than ten seconds, to much applause. The secret to this success? Managing everything through a Storage Area Network (SAN), with no LAN utilization to speak of. 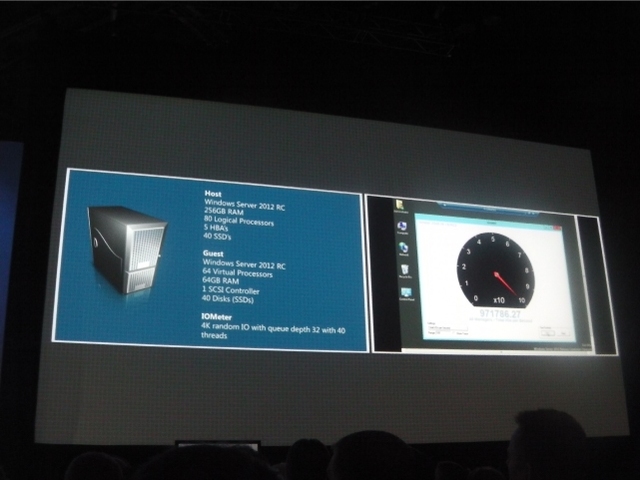 In the first week of its release, we were told, the Windows Server 2012 Release Candidate was downloaded over 80,000 times. The obligatory corporate video was shared with the audience, filled with happy customers talking about how much they love the product: “game-changing”, “jaw-dropping moments”, “brilliant”, etc. 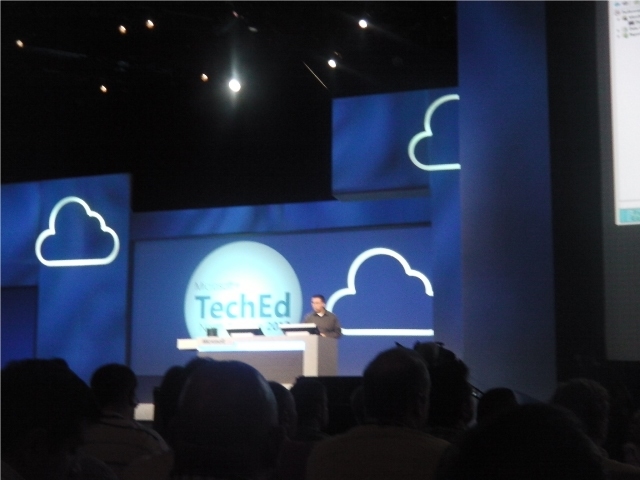 A glimpse of the new Windows Azure console. Lush. 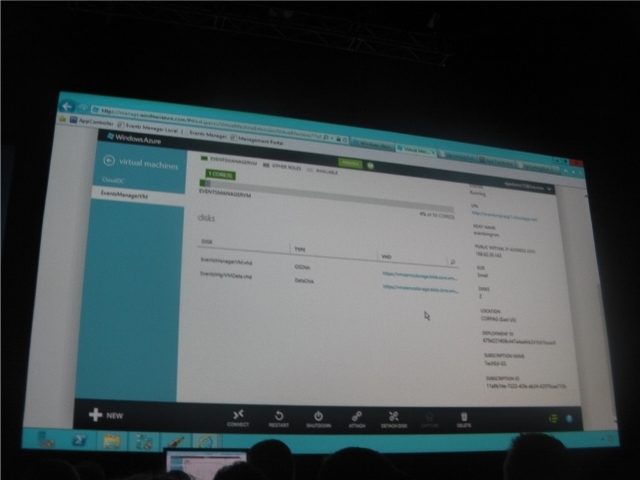 Through the blurry haze of this image (apologies for that), you might just spot Linux on the virtual machine OS selection list. 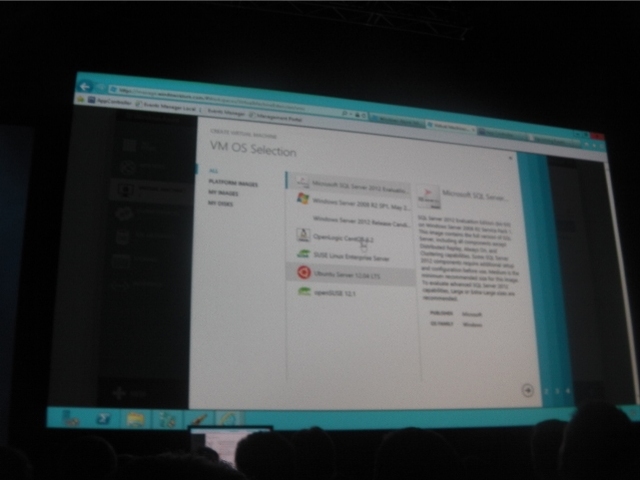 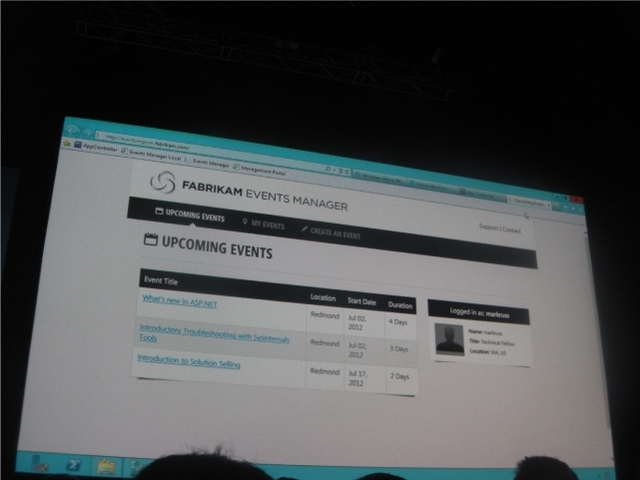 The next-generation of apps; personal + social + intelligent = ‘the modern app’. “Sharing isn’t a bolt-on, it’s built into the application”, while ‘intelligence’ is all about finding more ways to ‘sweat’ the data and make it more useful. 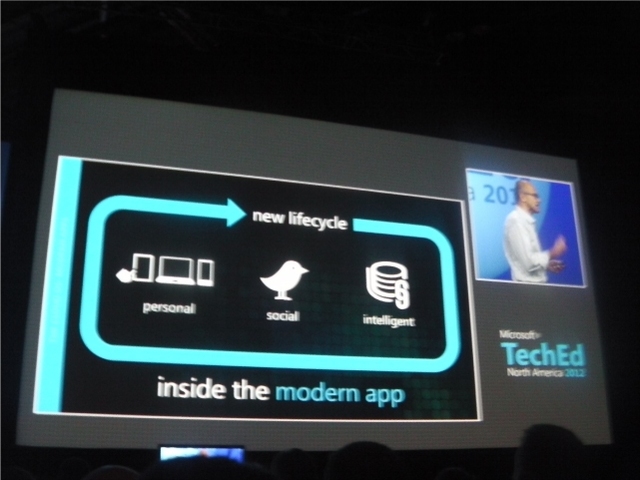 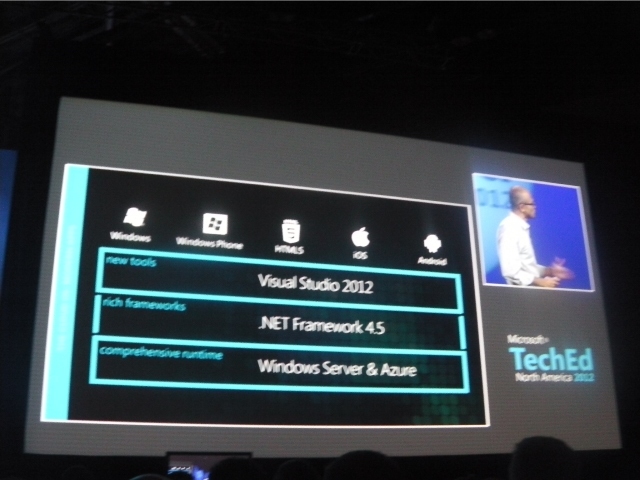 Microsoft’s Scott Guthrie took to the stage next, for an app demonstration… 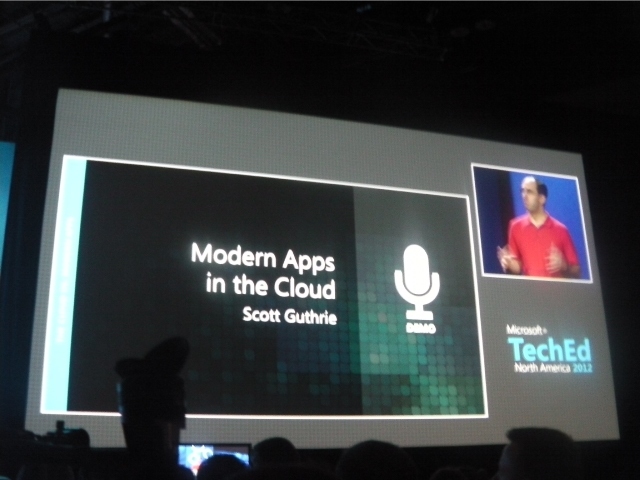 …a quick exercise in deploying an app to the cloud in Visual Studio 2012. “It’s so easy your boss could do it.” 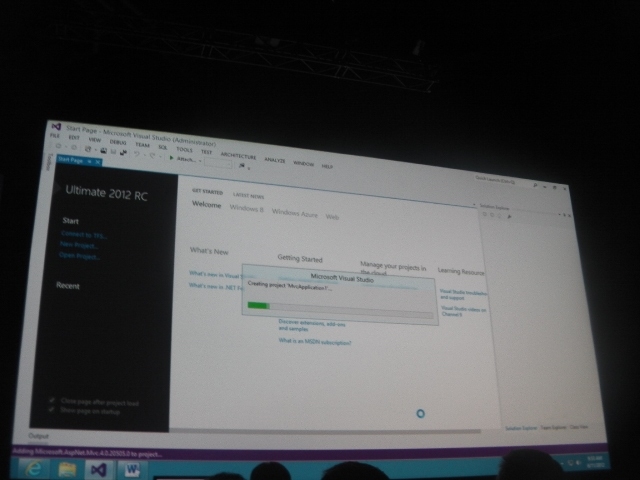 Here, the app is running in a third party app emulator… 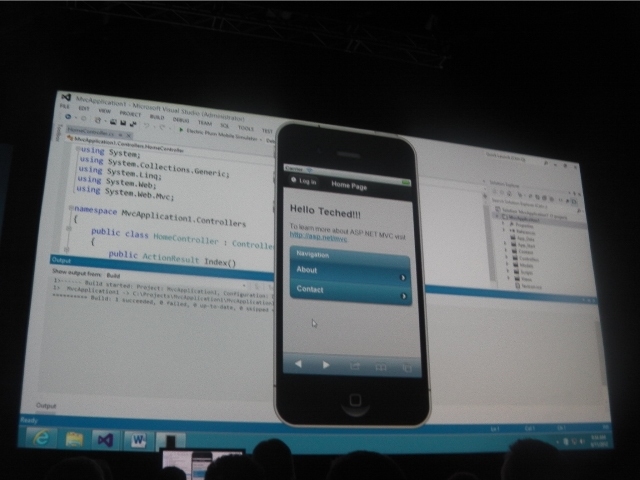 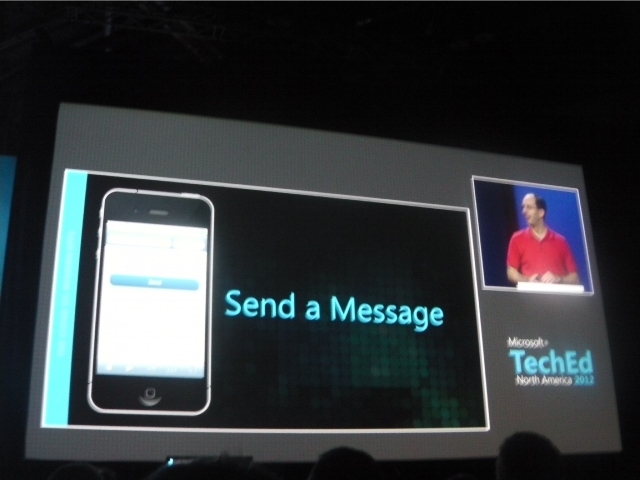 ...and then spit out those messages out in a much more basic format... 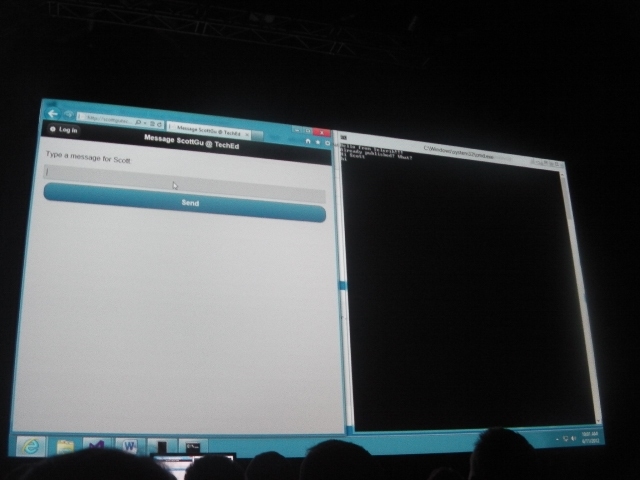 …although the TechEd crowd seized the opportunity to cause mischief, flooding the app with all sorts of naughty messages, to the delight of all in the audience. "Hi Mom!", "Wheres my Vodka Redbull" (sic), "format c:\" and the dazzling witty "Sean is gay", all featured on screen. 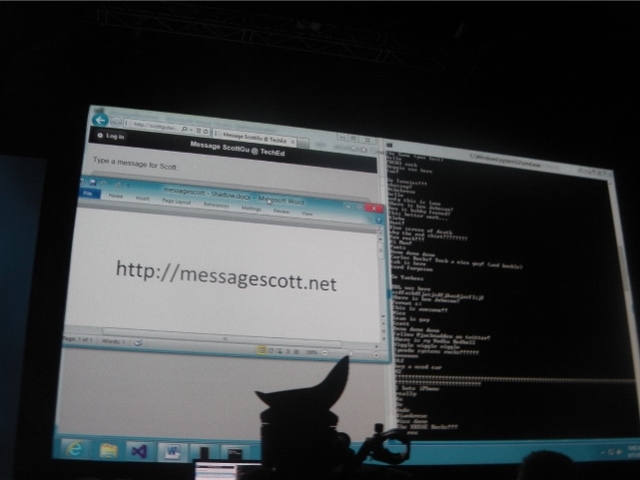 The full version of TFS is currently available, free of charge, in the Team Foundation Service Preview at www.tfspreview.com. While Microsoft isn’t yet ready to announce pricing for TFS just yet, there will be a free service tier available when it launches fully in the months ahead.

HTML support in LightSwitch was also announced today, giving a big boost to Microsoft’s support of HTML5. Microsoft’s Jason Zander, corporate vice president for Visual Studio, told me after the keynote that Microsoft isn’t deterred by the continued absence of a complete HTML5 standard (still at least three years away), and that enough of the spec is complete to start pushing HTML5 towards the front and centre. Given the clear moves towards HTML5 across the industry (albeit somewhat slowly), waiting until the HTML5 standard has been finalised just isn't an option while there's growing demand for it right now.

Back to the keynote, and the importance for Microsoft to “reconsider access and device management” was highlighted, with an emphasis on making everything “people-centric, based around the person and their device”. 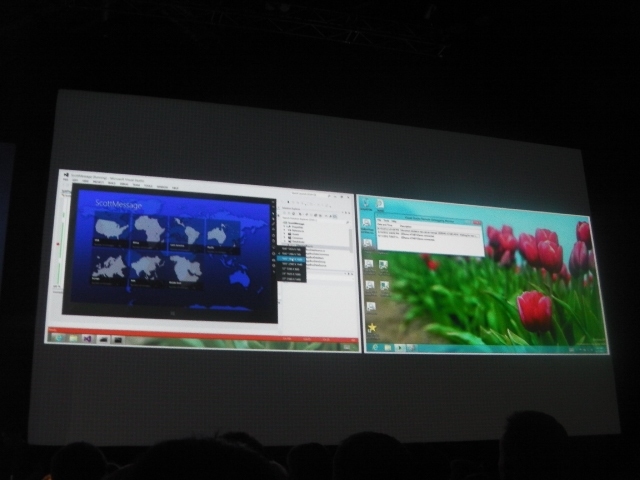 A new version of Windows Intune was also announced today… 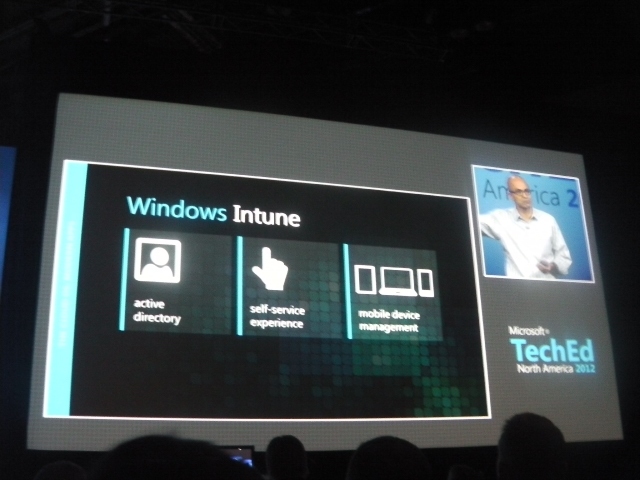 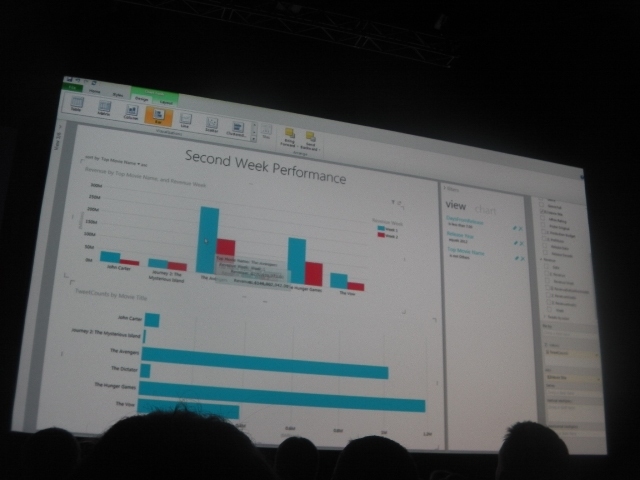 …including some rather nice visualisations, taking available data… 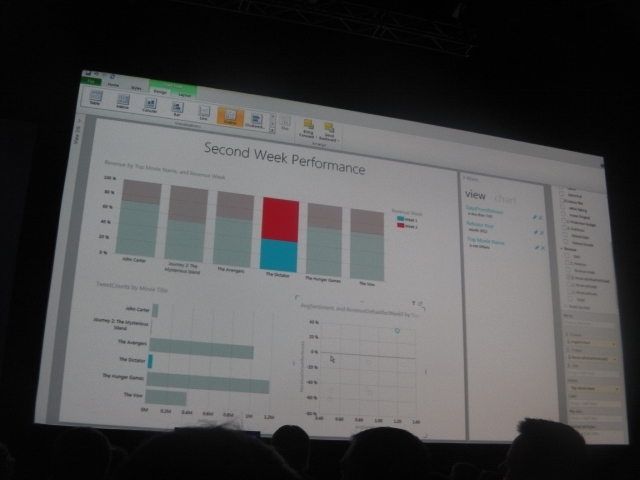 …and interrogating them in ways that help the user to extract information more transparently, to help inform better organisational decisions. 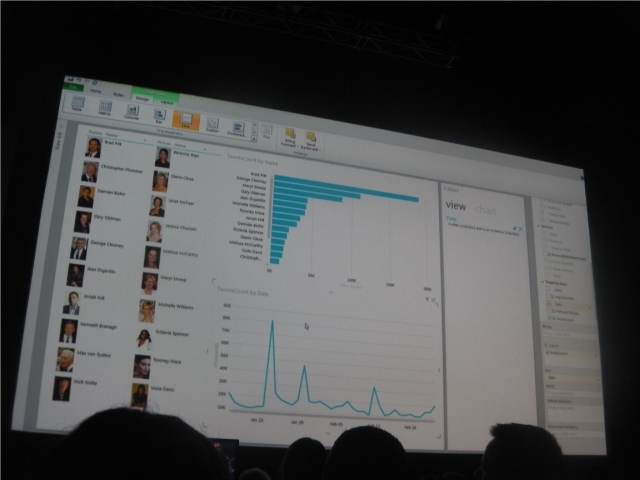 All in all, today’s keynote provided an intriguing vision of world-class products coming together and integrating more closely than ever before. Of course, only time will tell if Microsoft's vision will be successfully realised in wider real-world deployments, but for now, there’s a lot to be optimistic about.


There’ll be more coverage from TechEd this week; be sure to let us know what you're hoping to find out from the event, and give me a wave if you're here for TechEd here in Orlando too!