There's been a lot of media coverage around the News of the World hacking scandal this week, it appears that Lulzsec has stepped up against the parent company, Media Corp's other publications and has hacked Rupert Murdoch's major newspapers website, The Sun. 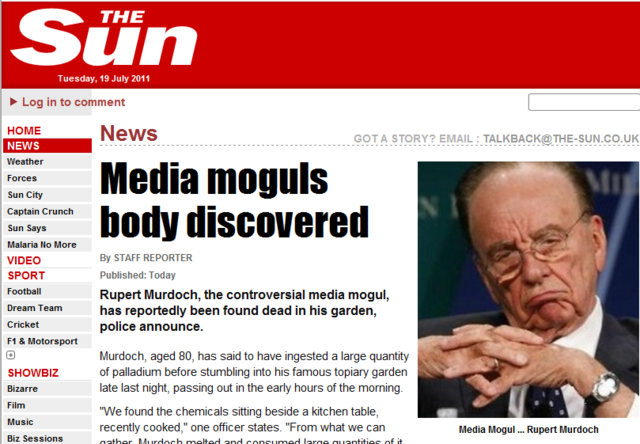 The website today redirected to an article on a elaborate copy of the official Sun website, that claimed Rupert Murdoch had died, and had been found in his garden.

The Lulzsec official Twitter account claimed they were behind the hack, tweeting; "We have owned Sun/News of the World - that story is simply phase 1 - expect the lulz to flow in coming days." and with a later tweet saying "The Sun's homepage now redirects to the Murdoch death story on the recently-owned New Times website. Can you spell success, gentlemen?"

It appears the hacking group may be out to attack Rupert Murdoch's media empire exclusively, if you right click on the webpage the threat appears; "Murdoch. The end of your global media domination is nigh. Be afraid!" appears.

It sounds like we'll be seeing more hacks from the infamous Lulzsec over the coming weeks, even though the group claimed they were no longer performing attacks on organizations. The group also published the below comic on the hacked Sun website. 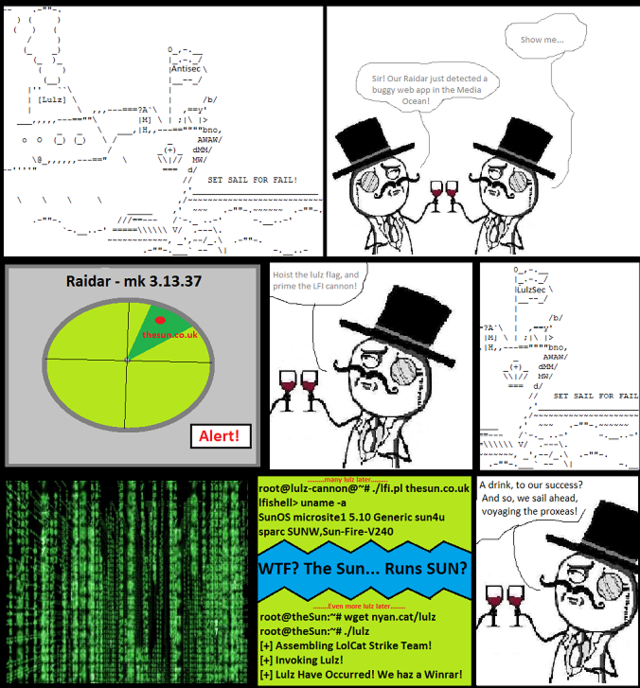 TheSun.co.uk now redirects to our twitter feed. Hello, everyone that wanted to visit The Sun! How is your day? Good? Good!

Oh, we forgot to mention that we sailed over to News International and wrecked them too.

Update #3: Various hacking groups are now giving out the contact details of staff at the company and asking people to call them.

Update #4: Email address and passwords for "Rebecca Wade" have been leaked. "Wade" is Rebecca Brooks' maiden name. It'll be interesting to see what comes out of the account. In addition to this, passwords for Bill Akass (Managing editor, News of the World), Danny Rogers (Sun online editor) and Lee Wells (Editorial Support Manager) have all been obtained by the group.