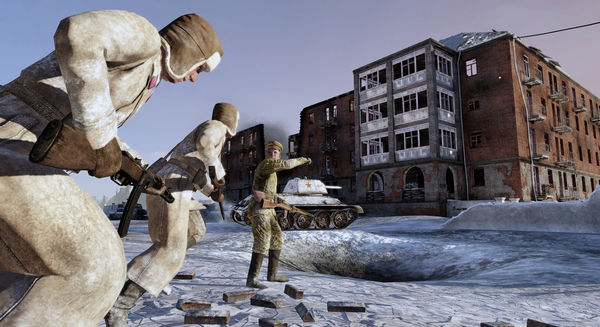 The next several days for gamers will be busy ones, especially if they like downloadable PC games. The big new game highlight of the week is Red Orchestra 2: Heroes of Stalingrad. This sequel to the cult hit WWII shooter from developer Tripwire Interactive is aiming to look and feel more realistic than the typical run-and-gun shooter. It's being released as a PC exclusive.

Another game due out this week for the PC game fans is Hard Reset. This title from the new development team at Flying Wild Hog is a short but supposedly solid single player shooter with a sci-fi cyberpunk theme. If you like racing games, then the long awaited Trackmania2 Canyon might be what you are looking for. This continuation of the long running racing game franchise comes from developer Nadeo and publisher Ubisoft and lets players not just race but gives them access to a powerful track editor as well.

Xbox 360 gamers get their own exclusive title this week with The Gunstringer. This rail shooter-action game from developer Twisted Pixel Studios is also a Kinect exclusive which lets players use their body to fire on enemies in the Wild West.

Playstation 3 gamers will be able to play God of War: Origins Collection this week. It brings the action game franchises' two PSP installments, Chains of Olympus and Ghost of Sparta, to the PS3 with remastered graphics and more new features.

Other new games out this week include the pro hockey title NHL 12 from EA Sports for the Xbox 360 and PS3 consoles, and the PC port of Ubisoft's recent console shooter Call of Juarez: The Cartel.