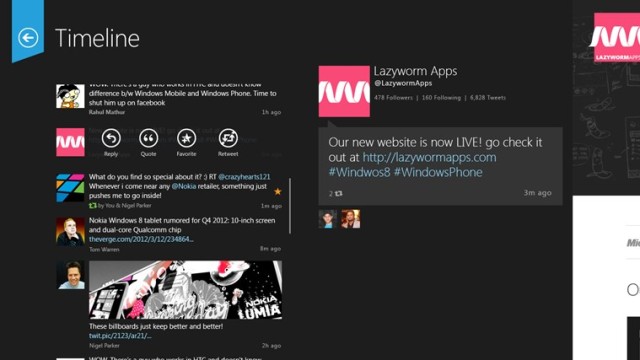 If you have a Windows 8 or Windows RT PC, you also know there is currently no official Twitter app for those operating systems. There are a few third party Twitter apps in the Windows Store that are quite good and one of them is Tweetro+ from developer Lazyworm Applications.

Earlier this morning, the team launched a new version of Tweetro+ for Windows 8/RT that adds a few more new features. The biggest change is that Tweetro+ now supports Twitter's API 1.1, which the service will officially start enforcing for all third party Twitter apps on March 5th. Lazyworm Applications says, "To avoid any issues, please install this update as soon as possible."

The updated app has added the option to enable the Tweet Marker in both Mentions and Timeline, along with Timeline bookmarking. There's also a new option that lets users directly open any tweet links in their default web browser. Finally, there's been some unnamed tweaks and bug fixes made to the app.

Lazyworm Applications is still selling Tweetro+ for $9.99 in the Windows Store and the app is currently in the top 50 list of all the paid Windows 8 apps in the store