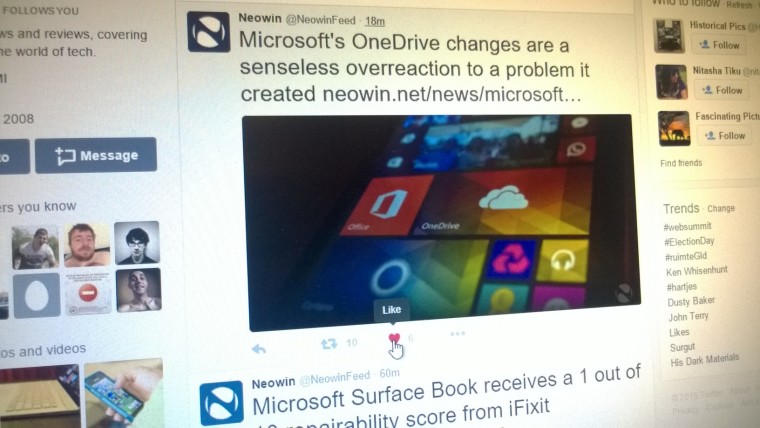 As exclusively reported by Neowin exactly two months ago, Twitter has now changed the name for favoriting tweets to 'Like', seemingly bringing it more inline with the same option on Facebook.

The announcement was made on the Twitter blog earlier today - and the reasoning for the change? People found the star too confusing:

We are changing our star icon for favorites to a heart and we’ll be calling them likes. We want to make Twitter easier and more rewarding to use, and we know that at times the star could be confusing, especially to newcomers. You might like a lot of things, but not everything can be your favorite.

Microsoft's OneDrive changes are a senseless overreaction to a problem it created https://t.co/weIIbGLe3R pic.twitter.com/vKGeTAeEvG

As shown above, (assuming you have JavaScript enabled) the old favorite star has now been replaced with a red 'heart' icon, which is grey when not 'liked'. The blog post goes on to say that "The heart, in contrast, is a universal symbol that resonates across languages, cultures, and time zones. The heart is more expressive, enabling you to convey a range of emotions and easily connect with people. And in our tests, we found that people loved it."

Starting today, users will see hearts on Twitter for iOS, Android, Twitter.com, TweetDeck, Twitter for Windows 10, as well as on the Vine Android app. They will also be added to Vine for iOS and Twitter for Mac "soon".