Phantom Squad, the self-proclaimed hacking collective who threatened Microsoft and Sony's online gaming networks over the Christmas period, has had one of its main Twitter accounts suspended.

When visiting the account's page, you will now be redirected to a message that reads as follows:

This seems to suggest that Twitter may be taking a more proactive role in dealing with groups who use its service to promote and advocate online attacks, such as those against Xbox Live and PlayStation Network. The suspension of the account comes after Xbox Live's outage yesterday, which Phantom Squad claimed to be involved in.

In the past, Twitter has been somewhat 'hands-off' in dealing with profiles discussing attacks - as can be seen by Lizard Squad's account, who attacked Xbox Live and PlayStation Network last year. Whilst they have had accounts suspended previously, they are still able to create new accounts and use them as normal, with Twitter seemingly not taking action on the new accounts for quite some time.

Update: A user on Twitter, named 'hackingurwifi', recently sent out a Tweet to @TheJackah claiming that the Twitter account of Phantom Squad was hacked just before it was suspended. hackingurwifi appears to be closely affiliated to various hacking collectives - posting multiple tweets of affiliation with different groups, along with having a large following of over 58,000 followers.

hackingurwifi has also just tweeted out screenshots claiming that access to the accounts for Phantom Sqaud are under his control: 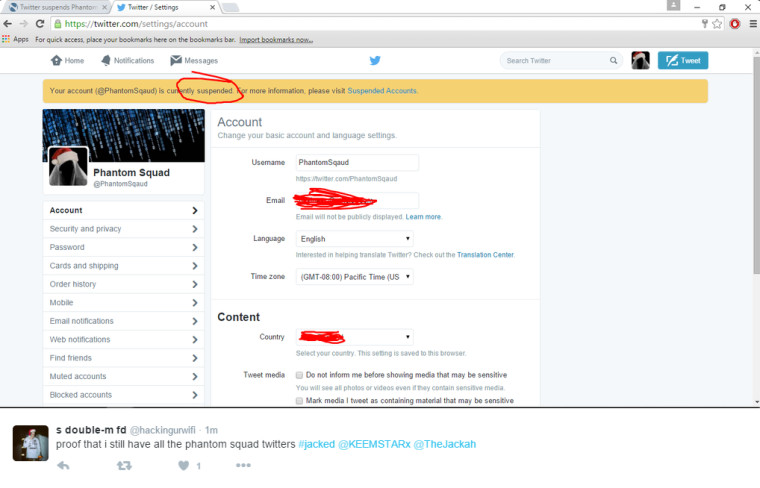