Mounting evidence of interference in the 2016 presidential election by Russian agents and organizations has prompted Twitter to make the unprecedented move of no longer accepting advertising from news agencies Russia Today and Sputnik. The move is effective immediately.

In a blog post about the decision, Twitter explained that it was a difficult decision, but based on its own research and that of the U.S. Intelligence community that the two had tried to interfere in the election:

Early this year, the U.S. intelligence community named RT and Sputnik as implementing state-sponsored Russian efforts to interfere with and disrupt the 2016 Presidential election, which is not something we want on Twitter. This decision is restricted to these two entities based our internal investigation of their behavior as well as their inclusion in the January 2017 DNI report. This decision does not apply to any other advertisers. RT and Sputnik may remain organic users on our platform, in accordance with the Twitter Rules.

Twitter said that it will donate the $1.9 million in projected revenue from RT ads since 2011 "to support external research into the use of Twitter in civic engagement and elections, including use of malicious automation and misinformation, with an initial focus on elections and automation." It promised more information in the near future.

Needless to say, Russia Today (RT.com) and Russian officials did not take kindly to the news.

“I never thought that Twitter is under the control of the US security services – it seemed like a conspiracy theory. But now Twitter appears to have admitted it,” RT EIC Margarita Simonyan told RIA Novosti news agency. “This is highly regrettable. It is particularly regrettable that now US media operating in Russia will feel the tender response of the Russian authorities.”

She said she would be happy to share Twitter's election pitch to them. RT.com also published a letter it received from Twitter in regard to the cancellation of ads from the news site. 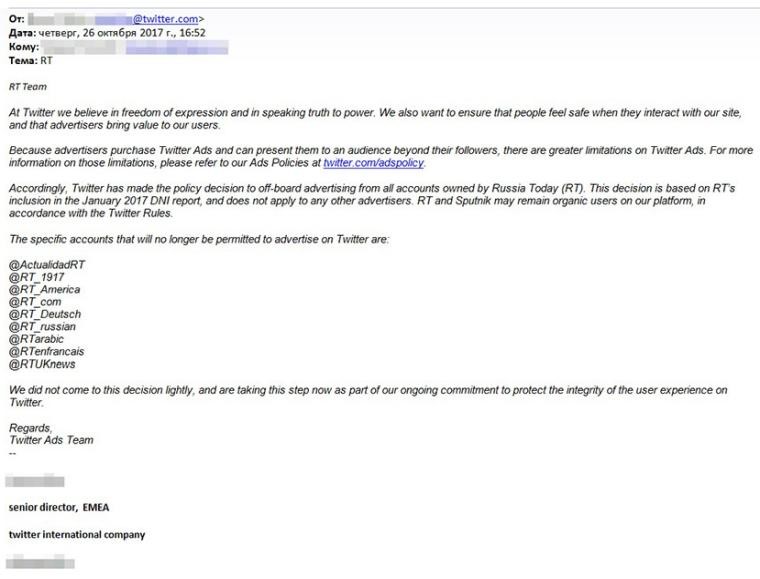 The Russian Foreign Ministry went even further, saying that the move will have serious repercussions:

"We consider this a yet another aggressive step aiming to block the activity of Russian channel RT," Foreign Ministry spokeswoman Maria Zakharova said in a statement to RT.com, saying it is a "result of pressure from some of the US establishment and security services. Retaliatory measures will naturally follow. We emphasize that preventing Russian media from doing their job, including with the help of security services, is a testament to a crude violation by the United States of international and internal laws that guarantee the freedom of speech."

The move and controversy come on the heels of Twitter announcing that it is close to turning a profit for the first time, likely as early as next quarter.