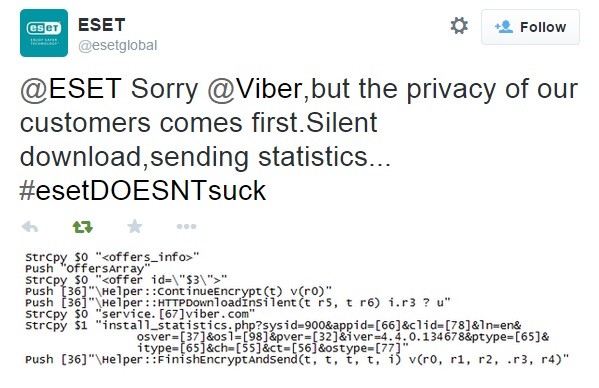 Viber has slowly become more and more popular in recent times and was even acquired by Rakuten earlier this year for almost a billion dollars. Going beyond mere mobiles, the service was also expanded to desktops in 2013.

It appears that at some point, however, ESET's NOD32— the anti-virus software— began flagging Viber as a threat. Whenever a user would try to install Viber, NOD32 would return a pop-up saying that a "potential threat" has been found (with what NOD32 appears to suggest is a toolbar that Viber tries to install into IE) and asks the user whether or not the user would want to proceed.

This action appears to have annoyed the Viber team, prompting them to post an image of the pop-up with an overlay of "#EsetSucks" in big red text, alongside a tweet saying that the software is buggy and that users should uninstall it.

We suggest you uninstall @eset - get a better antivirus.Buggy software keeps reporting a "threat" in Viber #esetsucks pic.twitter.com/ndpE0HYV4Y

What Viber wasn't expecting, however, was for ESET to respond, and the response was as classy as it can get. ESET tweeted back its own image, this time, however, it was an image of the Viber installer's source code showing silent downloads and silent statistics being sent back to Viber, and a message from ESET saying that their users' privacy comes first. Oh, and they also included an "#esetDOESNTsuck" hashtag at the end of their tweet.

Word to the wise: if your product is being flagged by anti-malware software, its best not to make a public spectacle of it. And if you really must, then make sure to not tag the company you're calling out— it's probably not going to end well.

Update: Viber has contacted Neowin with some clarifications on the matter:

Viber software reports that an installation is complete. As I'm sure you know, every installer reports that. Eset says Viber has a toolbar. As we've previously stated, Viber does not and has never had a toolbar. Therefore we stand by our original comments and request that Eset stops blocking Viber unnecessarily.