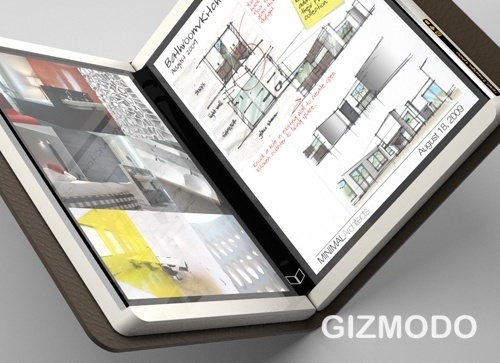 Microsoft's Courier tablet project generated a ton of press buzz after the web site Gizmodo broke the news about the product in 2009. However, the tablet device was canceled in 2010, before the release of Apple's iPad. What happened to this promising project? In the first of a two part feature at News.com, the history of the Courier is detailed, using unnamed current and former Microsoft team members as sources, and gives at least a partial explanation as to why Microsoft decided to shut down its development.

The Courier was the brainchild of J Allard, who helped to lead both Microsoft's successful Xbox business and later the not-as-successful Zune music player division. Courier was created in Microsoft's now shut down Pioneer Studios. The tablet had two 7 inch touch screens that supported both finger and stylus touch. The screen came in a case that opened and closed just like a book.

Allard decided that the Courier was going to use a modified version of Microsoft's Windows operating system. That may have been part of its downfall as the Windows division, lead by Steven Sinofsky, was working on Windows 8 at the same time. Sinofsky and his team had their own vision for a touch screen interface for tablets. Another problem with the Courier is that Allard didn't see the tablet as a replacement for a desktop or notebook PC but rather a complement to those products.

The article claims that in a meeting between Allard and Microsoft chairman Bill Gates in 2010, Gates asked Allard how the Courier accessed email. Allard replied that the Courier wasn't designed to have an email client, saying that Courier users could get email from the Web. That apparently didn't sit well with Gates. Only a few weeks after that meeting the Courier project was shut down. Allard left Microsoft a few months later.