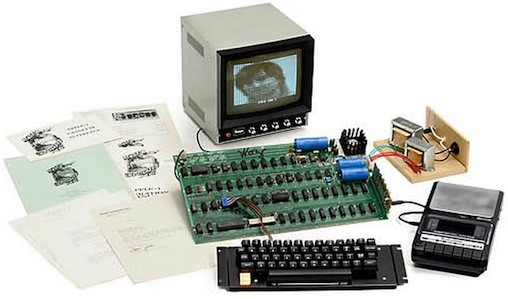 Remember that rare, working Apple 1 that went up for sale in Germany, expected to net upwards of $260,000? It's now been sold for well over double its estimate, fetching $650,000 from an anonymous buyer.

The Apple 1 was amongst the first 50 units built by Steve Wozniak and Steve Jobs in his parents garage, as well as one of an estimated six that are still in working order. This particular unit, purchased together with an original monitor, tape-player and keyboard, was signed personally by Wozniak. The computer's original documentation was also signed by Apple co-founder Steve Jobs, widely hailed as the company's figurehead.

German auction house Breker had previously set records by selling an Apple 1 for $640,000, but Saturday's auction in the German city of Cologne beats that record by $10,000.

The Apple 1, of which only 200 were made, is the "holy grail of collectable technology", according to Bob Luther, author of The First Apple. The unit sold by Breker on Saturday was originally owned by Fred Hatfield from Computer Data Systems. The original manual accompanying the device contains a letter from Steve Jobs to Hatfield, offering him the chance to exchange his Apple 1 for an Apple II 4K motherboard for an extra $400. Hatfield clearly made the right decision, as while Jobs' offer would have saved him almost $1,000 off the Apple II's original retail price, the Apple 1 he opted to keep has proved to be just slightly more profitable.