PC gamers are well aware of the DirectX API that has been used for years for accelerating 3D graphics in previous Windows-based operating systems. For Windows 8, Microsoft decided to bring that kind of hardware graphics acceleration support for nearly all applications.

In the newest post on the official Windows 8 blog, Microsoft's Rob Copeland talks about how the Windows team wanted to add hardware graphics acceleration support for all of the new Metro style apps, along with supporting a wider variety of graphics hardware in general.

For measuring Metro app graphics performance, Copeland writes that Microsoft measured them in a number of different metrics, including frame rate, memory and CPU utilization, the "glitch count", which measured how many times an app took more than 1/60th of a second to render, and the "Time to first frame" which rates how quickly it takes from when a person taps or clicks on a Metro app to when the first frame of that app appears.

Rendering text is, not surprisingly, of great importance for Microsoft in Windows 8. Copeland states, "We’ve continued to improve text performance in Windows 8 by optimizing our default text rendering in Metro style apps to deliver better performance and efficiency, while maintaining typographic quality and global text support." The chart below gives an idea of how much faster Windows 8 is in rendering text compared to Windows 7. 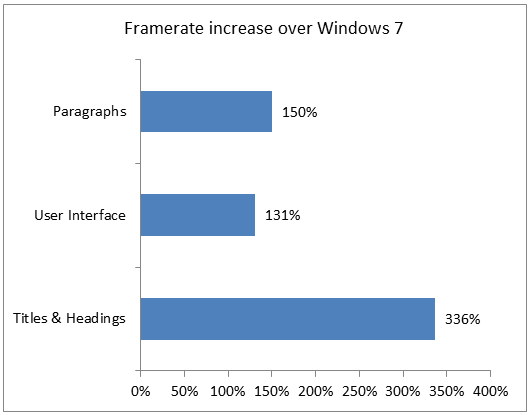 The post also goes over improvements in Windows 8 in rendering 2D geometry for features like charts, graphs and more in applications. It also renders 2D images such as JPEG and PND files faster; Microsoft created a test app that decoded and rendered 64 images. Copeland states, "Windows 8 takes 40% less time than Windows 7 to render 64 images (4.38 seconds vs. 7.28 seconds)."

For 3D graphics found in applications like games, Microsoft is offering Direct3D 11.1, the latest version of its long running API. Copeland states that the new version is also the foundation for 2D graphics support as well as 3D graphics applications. He writes:

The new API makes it much simpler to mix different types of content in a single scene because that single API now manages all of the GPU resources associated with rendering. This also reduces memory usage by eliminating the redundancy involved in creating multiple graphics device-management objects in app code. In addition, Direct3D 11.1 provides a uniform way for apps to access the various capabilities of different graphics hardware. It provides mechanisms for the app to determine what features are available, and then only uses those capabilities. This enables apps to make maximum use of the GPU’s capabilities, whether the GPU was designed for long battery life on a tablet, or high-end gaming on a desktop PC.

Windows 8 will also allow for better energy management while still offering more advanced graphics, especially on laptops and tablets that will have an upper battery limit. Copeland writes:

For Windows 8, we added new mechanisms for apps to specify the amount of precision needed in their graphical calculations. For example, when doing custom blending of multiple images where the image data is 8 bits per component, the blending computations could be done with 10 bits of precision rather than the default of 32 bits. The reduced precision doesn’t impact image quality, but does reduce power consumption.